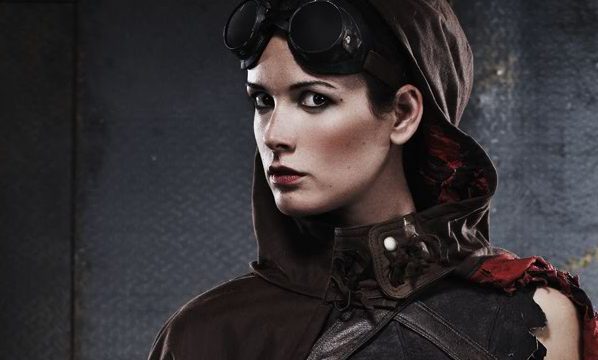 Last week we told you about Riese: Kingdom Falling, a brand new fantasy-steampunk Web series set to debut exclusively at Syfy.com (story).  Today’s the day for Episode #1, “Hunt,” which is now available online.

The episode is just under 10 minutes in length, and introduces viewers to a wanderer named Riese (Christine Chatelain), her wolf companion Fenrir, and the dying land of Eleysia and its oppressive ruler, Amara (Atlantis‘s Sharon Taylor).  A new episode of the 10-part series will be released every Tuesday and Thursday for the next five weeks.

The show is narrated by Amanda Tapping (Stargate‘s Samantha Carter).

Watch the episode now at Syfy.com/Riese, and visit the show’s official Web site at RieseTheSeries.com. A trailer for the series is below.

Tapping’s narration is kind of boring, camera work is way too shaky for a FANTASY show, and the fight scene was the worst shot fight scene I’ve seen since the last Bourne movie…but, other than that, I liked it, and I’ll be watching the next episode. Nice seeing Patrick Gilmore.

I like her narration, it gives it a storybook feel. And the fight scene was awesome! I’m definitely watching the next one.

I watched it and it was kind of good, but the actors, particularly Riese, had such perfect makeup and grooming that it seemed kind of fake and took me out of the story. But I’ll keep watching, at least for a while.

@Felix_Cat What was awesome about a fight scene you can’t see? It’s this terrible trend in Hollywood that everyone’s pulling even when it doesn’t make sense, action movies where you can’t see the action. I love the documentary-style when it actually is used in a show that is gritty and realistic, but this is a fantasy universe! There are no cameras! What are they imitating? What style are they going for? All they’re doing is trying to hide the fact that their actors can’t fight. I heard someone else say that Tapping should have used her British accent, and I… Read more »

The fighting scene was horrible!

So much for that show.