Patrick Gilmore: It started off with close to 18 characters and it’s been whittled down, and it’s easy to get lost in the shuffle, but then once you start gauging your environment, gauging your relationships with the other characters, you start really finding your place amongst the cast.

GateWorld: Well, you know what? It’s something interesting that I think they’ve done with SGU, and I don’t want to use the word “safe”, I don’t think that’s correct, but you guys are technobabble hubs and that kind of makes you safe. I think that was some of the disadvantages of SG-1 and Atlantis — you had Carter and Rodney who were technobabble king and queen. With SGU, they have, I think very wisely, relegated it to a number of different people. Sometimes you’re in the apple core, sometimes you’re not, someone’s always on duty there, which kind of makes sense, you know, so you all get to share in that. It brings out different personalities and different perspectives. 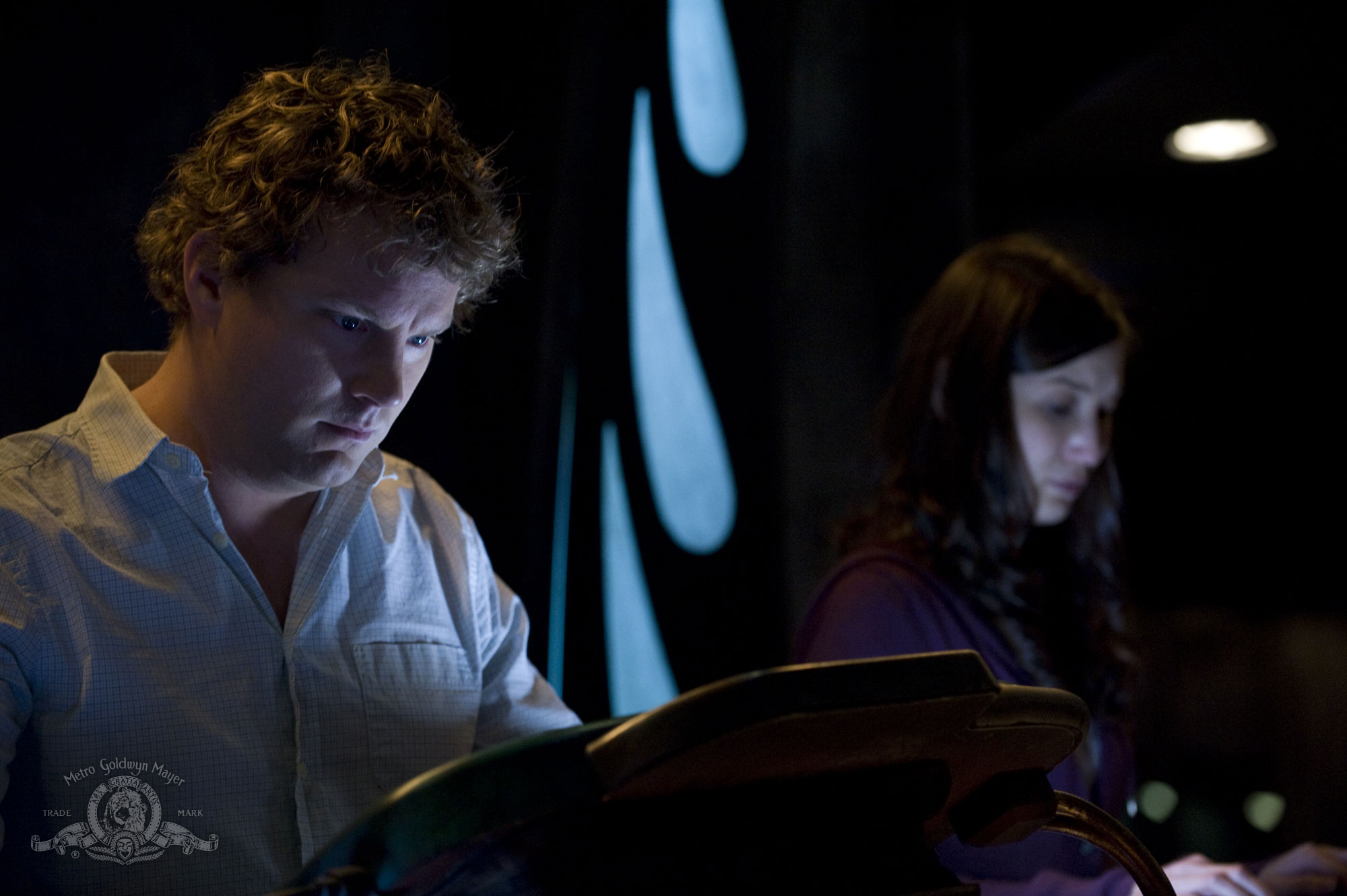 Does Volker secretly possess feelings for Lisa Park? From "Incursion"

PG: On the flip side of that, though, if you want to take the stance of a paranoid actor, the more people who are talking science, the more scientists are getting killed. Because you only need one or two, really, to figure out that that’s a blue star or white dwarf or whatever it is, then they move it on. But we’ve found our way and I think it’s nice to have that science team and the dynamics, the relationships, that we have. You know, are you a Young guy or are you a Rush guy?

Volker kind of floats in the middle, he’s like the child of divorced parents, I’ve said before. Brody is always interesting. He’s always been a Rush guy and then that scene in the mess hall at the end of “Trial and Error” when he said, “Destiny chose the right guy,” you see that switch. So you always have these continually morphing relationships. We could go on for five seasons, a strong, strong five seasons with the amount of characters and storylines that can be created from this.

GW: And the way that they’ve chosen to reveal it. SG-1 and Atlantis have been relatively straightforward in their storytelling, but with this, it’s like peeling back layers upon layers upon layers. And where they chose to set the story, which was everyone has already known each other from Icarus Base, which was not the case before, there’s a chance to back and tell other stories in the past. There’s a number of things that can be done this way. And what’s amazing, I mean, look at Franklin. You can die and not necessarily be dead.

GW: We may not be dead, but we’re certainly not coming around very often!

PG: Yeah, we’ve been lucky. Actually, I just saw Mark Burgess, who plays Franklin, in a play just a couple of weeks ago and he just texted me a couple of days [ago] about the wrap party. So it’s cool, you end up being part of this family. In fact, Curtis — you remember the character Curtis on “Air, Part 3”?

GW: Was he one of the guys on the offworld… or she?

PG: Yeah, yeah. They go through the ‘gate on the desert planet.

GW: Yeah, Curtis and Palmer. That’s it. Yeah, they get stranded.

PG: Yeah, Brad Stryker and Christina [Schild]. Brad Stryker’s become one of my best friends. You leave a show, but you’re still remain part of the family.

GW: Exactly. We left you way back there! I’ve always wanted to know what happened to them. 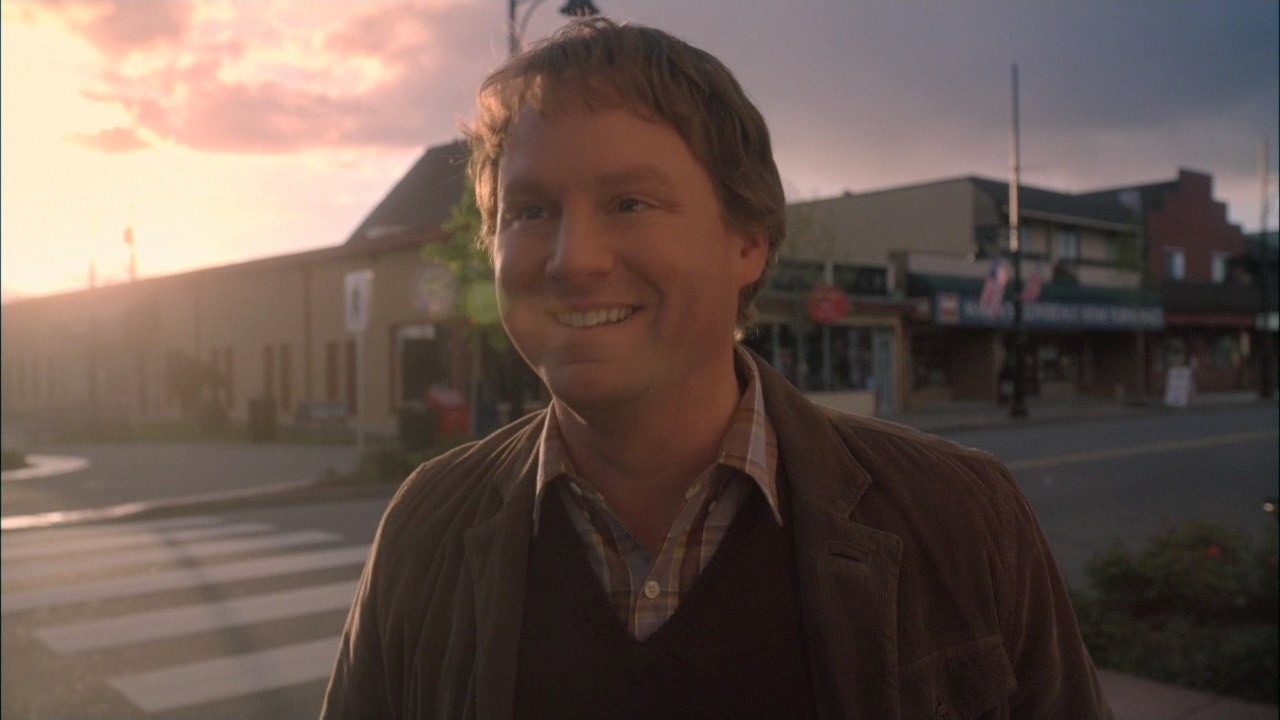 An hallucination of Volker attempts to thwart Matthew Scott's early arrival to his bachelor party in "Cloverdale".

GW: That’s one of the things that I love about this show — they leave certain things ambiguous. Early on in Season One, we were all talking about, “I wonder what Curtis and Palmer are doing right now. I wonder where they’re art, in terms of development.”

PG: I’ve got to say, when you and Darren have all your theories, it gives me a God complex to listen to them and go, “Nope! Nope!” as if I’ve got some sort of secret grail. I know the answers. Of course, we don’t know and we get the script and we eat it up.

GW: We were talking, I think, with Mark Savela about that, where they introduced in “Light” the ability for Destiny to recharge by a sun and we started talking about, “Well, what would happen if they used that to try and dial home?” Then the next week, they did it! Everyone else was saying, “Oh, look at that! They’re onto it! They’re onto it! Well, wait until next week!” and then it happened, so that was funny.

PG: It’s a lose-lose situation in my mind because when you get it wrong, I feel cocky, but when you get it right I get really angry, like, “You bastards! Keep your mouths shut!”

GW: Well, you know, when you watch a show for as long as we’ve watched it and picked it apart, there’s only so much. Certain things make sense and certain things don’t. It kind of shrinks the parameters down and that’s what’s so exciting when they choose to go in a direction that is completely amazing. I loved that TJ’s baby… I was expecting TJ’s baby to die, because that kid cannot survive on that ship. Every show’s done it, you don’t want to be saddled with a baby and she died and yet she didn’t. I’ll always love those answers that are kind of like “Yes and no”.