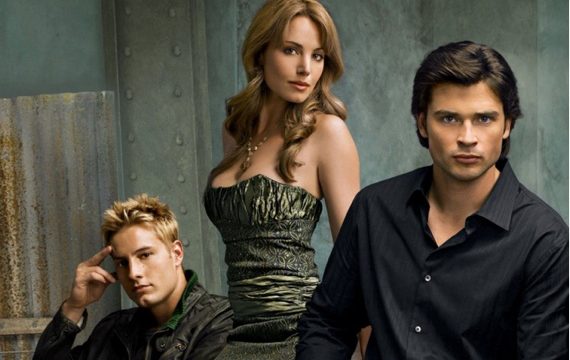 As the lights go out at The Bridge Studios in Vancouver, that other venerable production in the city is also saying goodbye.  Smallville will air its series finale this Friday (8/9c on The CW in the U.S.), in which (spoilers!) Clark Kent becomes a real superhero.  We won’t tell you which one.

The show has run for 10 seasons, matching Stargate SG-1 for the number of years in production — a record for a science fiction / fantasy show produced in North America.  (Yes, Doctor Who fans, we see you there.)  But on its way out the door, Smallville is snatching the Guiness World Record off of SG-1‘s shelf.

Last month Smallville surpassed SG-1 with the most number of episodes, airing its 215th hour.  Stargate SG-1 aired 214 episodes — five years on Showtime, five on Syfy Channel. When Smallville bows this Friday, the new North American record will stand at 218.

Why the difference?  As a cost-saving measure Syfy reduced its standard episode order from 22 to 20 per year, beginning with the eighth season of SG-1.  The CW, meanwhile, has continued the more industry-standard practice of 22 episodes each year — except for Smallville‘s seventh season, when the WGA strike shortened it to 20.

Like the Stargate franchise, Smallville is a veritable Who’s Who of the Vancouver film community. Rarely does an episode go by without the familiar face of an actor who have appeared in Stargate over the years. Only one of the show’s regulars ever crossed over, though: before she was Lois Lane, actress Erica Durance was Teal’c’s next-door neighbor, Krista.

Smallville did have a go at a spin-off series.  Creators Alfred Gough and Miles Millar wrote and produced an Aquaman pilot for The WB in 2006.  It was a bit rough around the edges, and the network decided not to pick it up in the midst of its merger with UPN.  The lead actor — Justin Hartley — was then recast as Green Arrow and would go on to become a Smallville regular.

Congratulations to Smallville for its world record, and for 10 years of a solid and consistently entertaining show!

All my favorite shows have and are ending to quickly.

Doctor Who and Torchwood have an uncertain future beyond their current seasons. Pretty soon, there will be nothing good on TV anymore.

Chuck also has an uncertain future. I should’ve put that in my earlier comment.
:(

Not sure how it can be a World Record when Doctor Who has been running 48yrs, now surly that is the world Record

If it is any consolation while Torchwood’s future is uncertain Doctor Who isn’t. It got ratings of 8 and 7 million for its first two episodes (when timeshifting was taken into account (but I don’t know if the BBC’s Iplayer was also included)) in the UK and it also did very well for BBC America over there.

@Billz Chuck has an uncertain future?! I love the show! :( :O

Doctor Who, uncertain future? Are you kidding me

its doing better than all of those shows combined, its just not showed in America for some stupid reason

I thought Smallville had already passed SG-1 like a couple years ago….?

Where did I get a silly thought like that?

At least there is a network out there that cares enough to let the writers finish the story! Thanks CW!!

Yeah, a lot of shows I watch are ending this year, but thankfully I found a few new ones to follow. Game of Thrones and The Walking Dead are both phenomenal shows that any fan of the sci-fi/fantasy genre should check out. Both are highly sucessful and have already received a season two pickup.

Chuck has an uncertain future, but I think it’ll end in a good place like SGU did. Four seasons is a good run if it was canceled.

I have no more “set in space” sci-fi’s left. Doctor Who is the only one that comes close.

It’s a long time and a good show. Congrats and farewell, Smallville :)

Way to pour salt on the wound, Darren. Stargate just died, and this superhero show (note: not scifi) illegally snags SG1’s longest running award. You just have this desire to keep reporting more bad stargate news even when there’s no more stargate.

Congrats Smallville!! An Amazing show,an amazing record for an amazing American and world’s superhero and amazing quallity consistence throughout all ten years of it’s run! A really rare tv gem,with awesome actors,writers,directors..many of them already legends in their own right!And most of them legends now after Smallville!
And since you’ve mentioned one of Smallville’s main cast members Erica Durance/Lois Lane as Krista in season 8 of Sg-1,it’s only fair to mention one of SGU’s main cast members Allaina Hoffman/Lt.Tamara Johanssen,our TJ as Black Canary,one of the main JLU members in Smallville!

Did you purposely left Michael Shanks out of this news? He was cast as Hawkman.

@steelbox: Since the story’s focus is Smallville, I’m calling attention to members of that show’s main cast that did Stargate — not vice versa. I don’t know why anyone would take that as a slight to Michael, who did a terrific job as Carter Hall in a half-dozen episodes of the show.

the 8th season of Smallville was normal. It was the 7th that was cut short due to the writer’s strike.

@Darren Summer: U missed “+ Magic”. If it has magic in it is not scifi anymore, next thing will be Lord of the Rings being scifi too.

@Cybersokar Smallville is a GENRE show if you’re familiar with a concept and the concept of magic is also very fluid.I’m assumong you’re talking about one,or two episodes of Smallville out of over 200 and the witches thing.But then explain to me how is a space vampire who sucks out “life energy” called Wraith any less magic,or any more sci-fi,whatever is easier on your brain!
And it’s Darren Sumner,not Summer.

I was not intending to start the Smallville arguement up again, Darren, I believen any right minded SG1 fan would side with my opinion of it. The main gist of my message was you rubbing salt in the fresh wound of Stargate’s death with this news of SG1 loosing one of its most important titles. Coupled with the status of Smallville’s real genre in doubt by many, having this show snub SG1 so soon after Stargate’s demise is just news us fans didn’t need to hear. Obviously if you want to change your format and report on news that has… Read more »

Well everyone in the world is well aware of how american’s love to rewrite history but seeing it done about actual events of the moment… shame. Sorry you cant change the ‘conditions’ of how something is measured – just to make the usa version the winner. If a person comes 2nd or 3rd in the 100m sprint in the olympics, they get silver and bronze. Oh wait, someone decided that if it is run on a saturday and the runner was the fastest one wearing Nike shoes so that makes him the fastest person in the world (in Nike’s). So… Read more »

This just adds salt to the wound.

Since Stargate is a franchise, the total should be taken from SG1 SGA and SGU combined

I agree its 17 seasons long, not 10, 5 and 2. My opinion and just an opinion… Smallville Blows compared to Stargate on 218 episodes that all blow. Where Stargate has 3 series, 5 movies (Counting Children of the Gods and Atlantis’s Rising) Suddenly smallvile is looking rather small……… If you like Smallville and enjoy the show, then good for you. This was just my out spoken opinion, still angry that SGU ended like it did… it ended… Not cool.

Also SG-1 Totally could have been renewed for a season 11. THey had the ratings and the support, money and time. But the MGM GRAND canceled them. They could have kept going. Thanks a lot MGM always speaking too soon or not enough. MGM you fail.

Wow, instead of congratulating another genre show on this milestone, it’s all bile and poison here again. And Smallville is just as much sci-fi as SGU. Alien on Earth vs. humans locked on a ship. Where’s the difference?

Congratulations to Smallville, i never watched it, but 10 years and 218 episodes is a milestone achievement. (Even if its not actually a world record. Fix the title plz.) @mythos Dr. Bruce Banner (physicist) is the Hulk because of a Science experiment gone wrong, the X-men involves Genetics, Fantastic Four were all Astronauts, and Superman is an Alien from OUTER SPACE. All these superheroes with “super” powers are all the result of some Sci-Fi element or another. (Batman less so, but still not parked in any other genre other than Sci-Fi) Sci-Fi doesnt have to involve aliens at all. @Rivyn… Read more »

@SomeVeryRandomStuff – The ones I listed were for very specific reasons. Superman is actually the least science fiction in my eyes because there’s nothing scientific about him. His powers weren’t the result of any scientific activity or element and even the stories of him that involve scientific elements are fantastical rather than science-driven. Of those on the list, Batman, as the one who had to create all of his technology that gives him his abilities, is the most scientific among them. And yet he’s the one who gets the nod as ‘less so’. Scifi doesn’t have to involve aliens but… Read more »

@mythos Will you please get of that high horse of ours,just for once please.We all know that you are the smartest man in the universe and that nothing is scifi to you,we GET IT already!!! Sf includes both science and fiction and the fiction part doesn’t always go hand in hand with science.According to your “definition”,neither of the sg franchise series is SF. Dr.Who sure as hell isn’t! And another thing,please inform yourself about Superman lore,before making such statements,cause you obviously have no idea about it.It IS based on science fiction,even the explanation of his powers and their source. Menwhile,give… Read more »

It would be cool if BBC America picked up SGU or even Showtime. Lots of my favorite shows are ending too soon.
SGU
Smallville
The Chicago Code
Lie to Me
LOST
Breaking In
Knight Rider
Las Vegas
Numbers
Without a Trace
Dollhouse
Terminator: the SCC

Yea that would be cool

I will miss Smallville………

At least there is Doctor Who! (which in my opinion will last a verrrrrry long time: key word= regeneration!)
It’s such a success!!!

Am I reading correctly that the US can’t watch Doctor Who??? Man, I feel terrible for them… I hope for the fans in the US that they will get their fill of Doctor Who!!!

Anyway, Smallville, you will be missed!!! (at least by me.)

Ancient Scientist : people in the US can watch Doctor Who if they get the BBC America Channel on there cable or satelight..

[SMALLVILLE SPOILERS]
I notice at the end of Smallville that it showed Lex running for the 2018 Presidental Elections when we do not have one for 2018 unless it was for 2016.