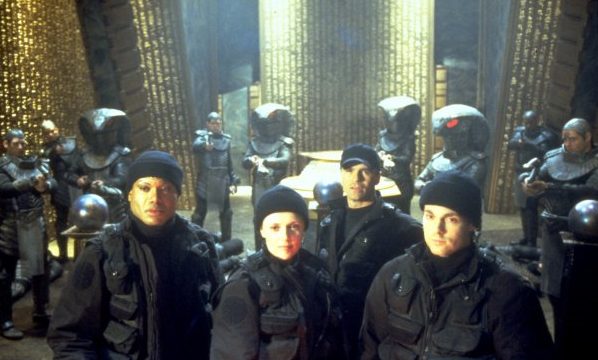 We’ve reached the mid-point of the first month of the Stargate Rewatch! Thousands of Stargate fans worldwide are currently enjoying Season One of Stargate SG-1 all over again. This week, it’s time to open the polls and vote on your favorites from this season!

For the past two weeks we’ve been taking your nominations for your favorite episodes and character moments from SG-1 Season One.  The most nominated are listed below on the ballot.

You don’t have to be a Rewatch participant to vote, but please vote only once!  Voting will close on or around August 30. We’ll announce the winners in each category at the end of the month as we wrap up the first leg of the Rewatch.  Nominations for the best of SG-1 Season Two will open on or around September 1.

The Polls Are Closed. Thanks for voting!

I need the SG1 dvds. I was only able to watch season 1-3 on Fox Series (Middle East). I have been looking for the DVD here in Nigeria but never found. Even though I got Stargate Atlantis season 1-4, but still need all Stargate SG-1 if any one can help me please, because I realy love the show. Thank you so much. Muhammad Shettima, Maiduguri, Borno State Nigeria.

I did my civic duty and I voted! Hopefully I won’t be called in for Co’ri duty.

I was able to vote although my captcha contained Hebrew characters! Seriously.

When/how do we see the results of the voting?

Best team moment/Teal’c moment isn’t “What is an Oprah”?

My votes are in

I did vote, but am only half way thought season one and had to remember the episodes from the first time I saw them, and yes I only saw most of season 1-5 only once.

i purchased the SG-1 DVD’s when they first went on sale . i need to replace season three because one of the disks is scratched . for me i would rather buy SG-1 on blu-ray first than atlantis which i also have on DVD and SGU . i think SG-1’s first 5 seasons were the best . i still like all Episodes of SG-1 from season 1 -10 . thank you MGM and the great people behind the scene’s in Vancouver,B.C. Canada who made the show for us .

i have watched SG-1’s episodes many times and Atlantis . the switch from VHS tape which was used at first to DVD was better but not great . the advantage which most people know is DVD’s do not fade and lose their picture quality like VHS tapes do . still can not believe it has been a generation since the movie Stargate aired in theater’s back in October 1994 .

indeed….i just started watching season 3 i started before every one else

btw would anyone know if there makeing a new series??????

@chris.r no, unfortunately no new Stargate series in the works (guess they don’t even think along those line). Oh btw I’d like a new Star Trek series too

Nice, human checker. don’t want the results of the vote tampered with by a bot.

I think the best team moment was when the entire team, including Hammond, were against the treatment of the Tollans in “Enigma.”

There will be a new stargate at some point, i think it depends on the trends. People right now arent as fascinated about space as they used to be and has been irrelevant for some time now, maybe thats part of the problem. Stargate is not alone, star trek has the same problem even with the JJ movies. They are sure taking their sweet time making that sequel if it ever gets made. Cant say im surprised they backed themselves in a corner with that alternate reality story.

Oh man, this SGrewatch is super exciting, even though I only have time to watch my favorites from each season! Reminds me why I love SG1 so very, very much. I’m ready to move on to Season 2!

That’s the best Sam moment for me – hands down, any season – is when she couldn’t leave Cassandra when she had a “bomb” inside of her. I thought it was a very touching moment.

Now I know why I don’t watch Season 1 DVDs very much. Although I luv the show, the first half of season one is a bit goofy. The background music is so mellow-dramatic! And some of the stuff that sputters out of their mouths (“if my female parts were on the outside…”)REALLY? Every season got better though and I can’t wait to rewatch the rest of the seasons!

Voted,although captcha is quite devious! The A.I. who manages to get through that can most certainly be called SkyNet and then we’re screwed!
Ready for season 2,which I will start this weekend.Will hurry up with the first two,or even three,cause I won’t have time later.

For “Best Guest Star”, it was a toss-up for me between Teryl and Tony, they were both so good and so beloved. But, in the end, Teryl was on the show so much that I couldn’t really call her a guest star.

Stargate was an awesome show.I have cast my vote.

Ya Season One was a bit wobbly but back then it didn’t matter cuz everything else about the show was so new and amazing. Just traveling thru the gate was “Wow!” and now we’re like, “does this gate travel effect really need to be soooo long?”

Extremely disappointed I could not vote for Jay Brazeau for best guest star, that guy was awesome, cumtraya! Teryl Rothery for guest star is kinda cheating, sure guest for this season but come on…

Muhammad Shettima, you aways can buy on the Amazon website. I’m know this ’cause I’m brazilian and the deliver in here. Luckly the 20th Century Fox made a brazilian version of Stargate SG-1, but I buy my Firefly Box in amazon and they send me by Fedex.

What I gonna do? Whe have one weak and a half and I have only three more episodes of SG-1 to watch!!!

@Duneknight – I think we’ll have to wait quite a long while (like forever, unfortunately) for new Stargate. Agree with ou re. Star Trek and backing themselves into a corner. I mean alternate timeline… hmmm. @all – agree that some of the first ses eps are a bit cheesy, but you know you can still find so many good things about them. The start of so many good storylines, Asgard, Thor’s hammer, and Torment of Tantalus, man oh man what an episode. Best in entire SG, the old guy’s performance is brilliant – the scifi story sense of wonder moments,… Read more »

My favorite moment from Season 1 is when Teal’c learns that Earth is the planet where humans originated from. Also best line is O’Neill, “I can save these people!”.

Loving the rewatch – Great idea guys. I recently finished watching the series back-to-back but starting it all over again from series 1 to join in the rewatch. This is my 4th time and I must say I am still not tired of watching the series. Hopefully someone will pick up the idea for a reboot of the franchise some date in the future. In the meatime we have all these episodes to watch.

Cast my votes. Watching the finale of Season 1 tonight. I didn’t realize how many ongoing storylines started in Season 1, namely the mirror and parallel universes.

Enjoying the Re-watch. Was thinking of getting my nephew involved but I now understand Brad Wrights complaint with the nudity in Children of The Gods (from the commentary on The Final Cut). Its the one episode that is problematic for kids…

I have had SG1 dvds for about 3 to 4 years now and I can’t even count how much I’ve watched them. I have all of Atlantis too and I just keep watching them because they’re so good and the only tv show I follow now is Eureka, online not on tv. My heart was broken when the shows ended and we didn’t get the sga movie. I kinda don’t really watch the first 3 seasons as some are just not for me. But the rest are dynamite! I miss those guys!