Today GateWorld kicks off the Stargate Rewatch, an epic, 17-month return to three of the greatest science fiction television series of all time: Stargate SG-1, Stargate Atlantis, and Stargate Universe.  We’re watching the entire franchise in order, one season each month, along with community discussion and special features here at GateWorld.

Thousands of fans from around the world have already told us they’re participating, and we want you along for the journey! Read more about the Rewatch and how you can participate. Get creative with your Rewatch plans! Blog it. Tweet it. One group of fans at SparkPeople is tying their Stargate viewing with a regular fitness challenge!

For your viewing pleasure all this month is SG-1 Season One, which first aired on Showtime in the U.S. all the way back in 1997-98. Two of MGM’s producers for its Outer Limits series approached them about making a television series based on the 1994 Kurt Russell movie, to which the studio had acquired the rights. Jonathan Glassner and Brad Wright were given the go-ahead, with a remarkable 2-year upfront commitment from Showtime. The network liked what it saw in those first episodes, and soon upped their order to 88 episodes — a full four years.

To take over the role of Kurt Russell’s dour and chiseled Colonel Jack O’Neill, the producers hired TV veteran Richard Dean Anderson — who brought a legion of his own fans from MacGyver (and the short-lived UPN series Legend). He would soften the character and add his own trademark humor, and also offered many connections with production crew and actors in the Vancouver film and television industry. Michael Shanks was signed to take over James Spader’s Dr. Daniel Jackson after delivering a solid impression of the sneezy, awkward archaeologist. 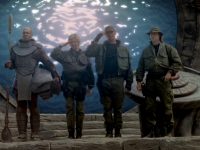 And the writers added three new regular characters to the mix: a brilliant astrophysicist named Captain Samantha Carter (Amanda Tapping), who had already been working on the Stargate project for two years before the events of the feature film; Teal’c (Christopher Judge), a stoic Jaffa warrior who joins the fight against his people’s oppressors; and Major General George Hammond (Don S. Davis), the no-nonsense base commander who would later soften and grow into a fatherly figure.

Stargate SG-1 was off and running.

Things to watch for:

Which version of “Children of the Gods” should I watch?  Whichever you prefer! If you haven’t seen 2009’s Final Cut

, do check it out. With the nudity removed (Showtime insisted on it, over executive producer Brad Wright’s objections), it’s also more family-friendly.

Come back next week to vote in the Season One polls!

I’m not going to participate in the rewatch if you can’t even get up the last two podcasts about SGU. It’s been nearly 3 months.

No offense, but that’s kind of a stupid reason to not watch more Stargate.

Was going to participate, but my dad and I just started watching my Star Trek Remastered blu ray sets which I have not had a chance to watch yet.

Still, you should also ask the question: how many Star Trek actors are in this season because they would often appear on SGU. I know of at least one who does, but you really have to watch for him or be paying attention to the guest credits.

Holy Hannah. How are we supposed to whittle an entire season of Best’s down to ‘One Moments,’ for cryin’ out loud!?
I have no idea. But, indeed, I will try.
FUN! And thanks for the SparkPeople link. Cool!

THE first day of the rewatch, and hulu’s taken stargate off!! that’s how i was going to watch the eps to participate. :/

@Browncoat1984, Robert Picardo was on ST and SGU, that was an easy one.

Buy the boxsets, if you’re a real “STARGATE” fan.

what about the portions of Atlantis and SG-1 that happen concurrently?

I do want in, but I have exams until the 26th. I’ll just have to blitz through the season that weekend ! looking forward to it !

This entire thing..and not just the rewatch,but all of the other ideas,reg. blogs,twitter,pols,forums is a great way to keep the stargate legacy alive and kicking,even pull in new generation of fans untill the franchise hopefully comes back again sometime in the future.

One question for @Darren and @David Read …If I understood it correctly,there’s gonna be one podcast each month about each of the seasons.
Will you possibly put out more podcast eps in between about some additional topics,season related or generally stargate related?

Jim, we have previously recorded shows dedicated to each season, which I’m linking to in the monthly kick-off posts. That’s the real connection between the podcast and the Rewatch.

We’re also going to be doing some real-time commentaries for a couple of episodes each month, but that’ll be a standalone series and not under the “GateWorld Podcast” name.

Finally, we will (God willing) be continuing on with the regular podcast format for various other topics, probably not more than one or twice a month once we’ve finished pounding out the last three SGU-related shows.

Will Gateworld be updating their page on what episode we will be watching together? Like “Children of the Gods” August 1 & “The Enemy Within” August 3rd and so on? This will be a good way for fans to be organised and actually be watching it together as a whole Stargate family.

That’s awesome @Darren! Sounds like you’ll be going full steam ahead and your slate’s full for a foreseable future.That’s really great news and a chance for me to listen to those old podcast episodes that I’ve never heard and always planned to when I’d rewatch SG-1.(I’d listened only to Atlantis ones).
Also glad there’ll be plenty of new stuff!

@Darren and @David Read, do you have any idea when the next podcast (Episode #127 – “Gauntlet”) will be put up, I have be watching for around a year and I look forward to the weekly podcast and, but a monthly podcast is cool too. Also could you do a podcast about, Devlin still wanting to make sequels Stargate movie, and what you think about that.

@Above.. You can also search Atlantis or SGU on that website and can watch those too…. Most of the video’s are the ones that were aired on TV :) Once again, Enjoy :)

@The Admiral yes, but there are some less well-known Star Trek appearances. And which ones were in season one? For instance, Armin Shimerman (probably butchered his name) “Quark” from Deep Space Nine had a guest role in an episode of Stargate Sg-1, which one was it?

@Browncoat1984 It was the one where they first come across the Nox.

@Browncoat1984 – My favorite actor from The Next Generation to show up in Stargate was John de Lancie (The character most often representing ‘Q’, since they were all technically called ‘Q’, from Star Trek and Colonel Frank Simmons on SG1)

The best thing about season one was the discovery of so many planets with human life. It’s something I wish happened in more seasons.

I wasn’t aware of the rewatch but actually did start to do it a month ago after breaking into a boxed set that my friend bought for me. As I was not a Showtime subscriber, I never really saw the first couple seasons and many of the episodes have been ‘new’ to me and are foundational, explaining what I know from the later seasons. Not sure how long it will take to get through all ten seasons, am now 5 eps into season two.

After watching The Torment of Tantalus, I check a name of one of the characters in the episode (Young Ernest Littlefield), and was happy to find out that the actor who played the role, became a main character Stargate: Atlantis, as Dr. Carson Beckett, and the actor is Paul McGillion.

I wish someone would volonteer writing some summaries etc of each episodes (I’m not such a good writer myself). I’m reading GW’s omnipedia SG1 season one and there is not much in the “episode guide” apart from transcript and piccies. I’d like some insights, analysis, cool trivia and such! GW should be my one stop shop for this – shouldn’t be going to Wikipedia or other sites. Sorry for moaning :)

I am just starting rewatch now! Watched about 10secs of the pilot… ah the memories! I’m excited it’s almost like watching it for the first time again :)