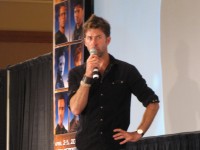 UPDATE:  Our first winner has been disqualified due to not confirming their award in the time allotted.  We’ll be drawing a new winner very soon.  While you can no longer enter, if you did while the contest was open, make sure to watch both your forum inbox and the e-mail address you registered it with.  You may be our next winner!

A favorite event and destination for Stargate fans for the better part of a decade will disappear after next year.  But before it goes, you might have the chance to be there to say farewell.

For the eighth consecutive — and sadly, final — year, Creation Entertainment will be hosting an Official Stargate Convention in the TV franchises’ home city of Vancouver, British Columbia.  The con, once again being held at the Metrotown Hilton in Burnaby, is set for April 27-29, 2012.  To celebrate its final Canadian outing, GateWorld is teaming up with Creation as they give one lucky winner (and their guest) the chance to attend the convention in style as a special present this holiday season.

Typically, guests for the Vancouver convention can and have been added up to a week prior to the event — but Creation has already amassed a formidable line-up of stars from the long-running franchise.  Other names will be announced leading up to the event, but those already announced include:

Through the generosity of Creation, GateWorld is giving away a pair of Gold Weekend Passes to the event.  Those familiar with Creation conventions know how inclusive these tickets are.  But for those who may have never been to a Creation convention, an explanation is in order — especially since the Vancouver con features other additional perks.

These two gold passes are valued at approximately $800, and will provide the winner and their guest with:

Members of GateWorld’s editorial staff will be there — would you like to be there, too?  Then simply head over to the contest thread in the GateWorld Forum and answer the question “Who is your favorite Stargate character — and why?”  Register first if you’re not a member of the forum yet. It’s quick, and it’s free! (Remember that if you already have a GateWorld account for commenting here on news stories, you still need a separate account on GateWorld Forum to post over there.)

We’ll randomly choose a winner on January 2, 2012 — and they will be notified via the forum.  You must be 18 years or older to enter, and only one entry per person, please.  Duplicate entries will result in disqualification.

IMPORTANT:  This contest provides the winner and guest with tickets to the convention only.  The winner and guest are responsible for all other issues involving con attendance.  Airfare (or other travel expenses), hotel accommodations and other incidentals are not included.  Please also note that since the convention is in Canada, any non-Canadian winner must also provide proper documentation to travel internationally.

This event is simultaneously sad and joyous.

But why is it the last Vancouver Stargate con? They still hold Star Trek conventions even after all these years and they are all very well attended. So why put a stop to a good thing?

I wish all the lucky attendees a good time. Please say Kree! for me.

Hey, just a thought for those organizing the event…Theres’ many of us that worked behind the scenes on Stargate that might be open to some sort of unstructured meet and greet with those attending the show. Personally speaking I was part of the rank and file there from the pilot episode until the end of SGU…Like I said…just a thought.

Because Star Trek is vastly more popular and enduring.

Having said that, this is certainly the end of an era.

Now, I wish I were Canadian.

Sure, we get Chevron 7 over here in England, but I have a feeling that it isn’t as epic as Creation Con.

@Gatevet….please email me at [email protected]. Such a scenario already exists. I can give you details and see if we can coordinate.

this is not the end of an era for stargate . for those of you not around when star trek left the air in 1969 it was a long time and huge task for gene roddenberry just to get the first ST movie made in 1979 . then almost another decade before st/next generation launched in 1987 .when stargate the movie aired in 1994 and later the series stagate sg-1 each was much better than the original star trek series becuse special effects were computer generated not made with hand puppets and models .people around today know star trek was… Read more »

Oh, how I would love to go to this convention. My inner nerd would probably have a heart attack. I actually entered the contest, I’ve got nothing to lose, and certainly have the vacation time handy.

I would love to get close to Christopher Judge (even if he’s not Joe Flanigan, Michael Shanks or RDA, he is freakin’ hot and I have a girlfriend who would be jealous of me – he is her man!).

Good luck to everyone who entered, and the winner needs to dish on all the details! :-)