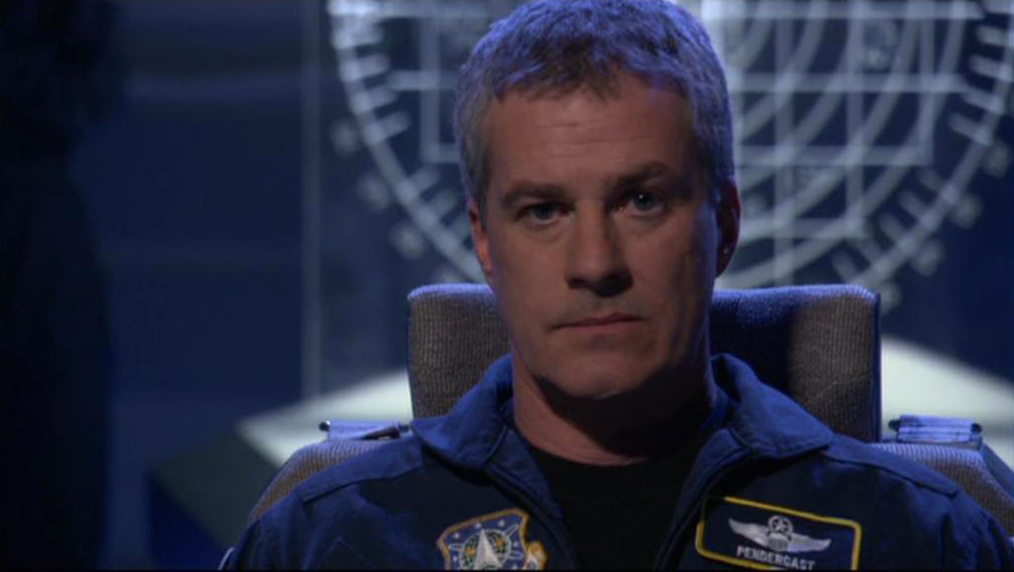 Colonel and commander of the Earth vessel Prometheus, taking over that position from Colonel William Ronson. Following Anubis's assault on Earth Pendergast and the Prometheus were given the uneasy charge of patrolling the planet for fear of Goa'uld aftershocks following the battle.

Pendergast intercepted Thor's Asgard mothership Daniel Jackson when it arrived in Earth's solar system, at first believing it to be a possible threat.

Some time later he ordered the search for Osiris's cloaked Al'kesh in orbit of the planet. When General Jack O'Neill became hesitant he had no choice but to not fire back, but his crew managed to transport the Stargate and SG-1 aboard before the enemy vessel entered hyperspace.

The following year, Pendergast was sent to pick up SG-1 on P4C-452 and head to Kallana to deliver a Mark IX warhead to an Ori beachhead. He maintained the ship's position when the Jaffa Gerak and a fleet of his motherships arrived to assault the force field, and when the Ori attempted to initialize their Supergate.

Pendergast went down with his ship when negotiations with the Rand Protectorate of Tegalus failed. President Nadal of Rand used his Ori satellite weapon to attack Prometheus in orbit. Pendergast remained aboard to beam his crew off the ship, and died in the process. He was responsible for saving 76 lives.

New Order, Part 2 - Following the battle over Antarctica, Pendergast ensures the safety of Earth in the aftermath.
Endgame - O'Neill orders Pendergast to locate Osiris's cloaked Al'kesh in orbit of Earth, harboring N.I.D. operatives that intend to use the ship to launch their own assault on the Goa'uld.
Full Alert - Pendergast faces off against a Goa'ulded-Trust-controlled Al'kesh, eventually using Prometheus to destroy it.
Beachhead - Pendergast picks up SG-1 from P4C-452 to deliver the team and a Gate Buster to Kallana.
Ethon - Pendergast stays behind on Prometheus to ensure his crew are evacuated, and is killed when his ship is destroyed by an Ori satellite weapon.