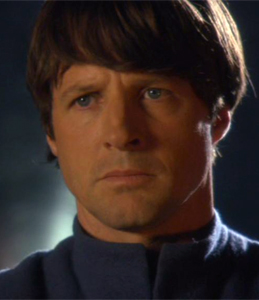 We’re keeping tabs on Revolution, a new pilot with a possible science fiction twist.  The potential series is being produced by J.J. Abrams (Alias, LOST, Star Trek) and Eric Kripke for NBC.

This week news of a Stargate nature arrived, with actor Tim Guinee cast in the pilot.  Guinee played Tomin, Vala Mal Doran’s husband and a soldier of the Ori, in a recurring role throughout SG-1 Seasons Nine and Ten.  He last appeared in the DVD movie The Ark of Truth.

Revolution is described as a “high-octane” drama that follows people struggling to survive and reunite with their loved ones after all forms of energy on the planet mysteriously cease to exist.  The pilot is being directed by Jon Favreau, with whom Guinee worked previously on the Iron Man films.

Guinee has recently appeared in a recurring role on the CBS legal drama The Good Wife.

Head to Deadline.com for the original report, and watch our sister site SciFi Stream for future updates on the pilot!

He was in the original pilot for The Sarah Connor Chronicles, but ended up being recast before it aired and the scenes were re-shot.
I hope they don’t do the same this time. He’s a great actor.
BRxxx

All forms of energy? Like wind? Heat? Kinetic? How the heck can someone survive in that environment? Human beings have numerous forms of energy converted within their bodies, they would have to cease to exist as well.

He played a doctor working for U.S. Army Medical Research Institute of Infectious Diseases (USAMRIID). He investigated abuses of medical science (fringe science). Good show with many themes revisited by Fringe and other shows.

Sounds interesting. But the premise will need to move to more electronics/mechanical machines stop working or other wise it does not make much sense on why Human still function.

Although humans and animals still being alive could be part of the show itself. I look forward to see where it goes.

@Mrja84 Don’t even bother yourself with it. It’s J.J.Abrams. Everything that guy does is pure mysticism. And even that,he’s been doing lousy for a while now.

…That should be April 6th.

You know what’s funny is a couple of weeks ago I saw an episode of SG-1 with him in it and I said “Man that guy really looks like Nathan Fillion, it’d be cool if he guest starred on Castle!” Then I just watched the episode of Castle from the other week and GUESS WHO I SAW?!