GateWorld: Let’s talk some thoughts on some individual episodes. “Metamorphosis” — it was the Will point-of-view episode that was directed by Andy Mikita.

GW: It was different from anything that had been attempted thus far. From the view of an extended look through Will’s eyes for, literally, two-thirds of the episode. Were there any difficulties in shooting that?

AT: I think probably more for Robin [Dunne] than anyone. Because he had to wear this big helmet cam and it was really heavy. And he’d get headaches and his neck would hurt.

Martin Wood: Act with that on your head. 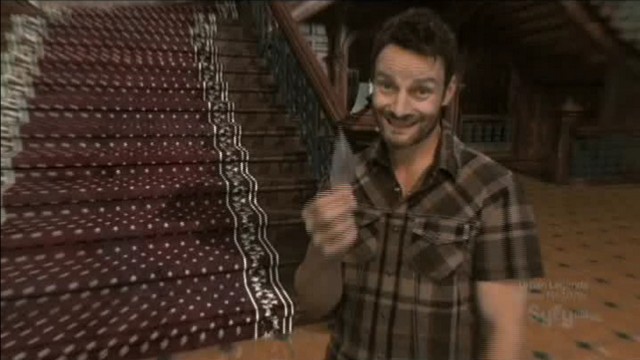 Both: With honors! [laughs]

There was a cool kind of connection, too. With being able to look right down the barrel of the lens.

MW: It’s a very personal show because of that.

AT: But it’s weird. And Robin was wearing these glasses that gave him playback. So he could see what the camera was seeing. His eyes were covered by this playback thing. It was weird, it was really weird.

MW: The logistics of it were the hardest part for Andy. Because he had to work through it all. The show, when we had it on paper, was a much bigger show. It was much different how it turned out on the screen, just because of all the problems that presented themselves with having to do it P.O.V. I love the fact that we did that. We took the chances on Sanctuary that you never get the chance to do when you have network and studio overlords. On Sanctuary, we didn’t have that. We can do the P.O.V. shows. We can do the musicals. We did the cartoon one that nobody saw. It’s fun to do those kind of things. The stop-motion animation one that we did on the weekends. [laughs]

AT: That was cool. [laughs]

AT: “Normandy” had such an interesting vibe to it. It was so …

GW: It could have had a better director.

AT: It could have had a better director!

I don’t remember who directed that one, but they were good!

AT: There were so many parts of shooting “Normandy” that I remember so clearly. The fact that our art department built a French village down the side of our parking lot. Like beside the studio, down that side.

MW: The same place that Mumbai was …

AT: The Port of Djibouti …

AT: It was amazing. It was a cool vibe on set. Everyone really wanted to honor that period. Or had family members that had been involved in the war at some point. So as much as it was fun to play dress-up and look a little different, there was this real reverence to it.

MW: I remember one night we were shooting, and it was raining …

AT: It was pouring, and we were up the mountain …

MW: No, I wasn’t thinking about that. I was thinking about in Carentan. And you’d wrapped. And usually when you wrap at night, you’re like “Guys, I’ve got to go.” And you weren’t leaving. And everybody said “Amanda, you can go.” It was just this feeling … 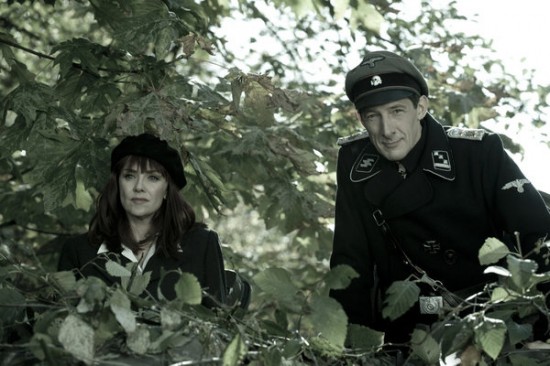 'Normandy', set during World War II, was one of Season Three's most high-concept episodes.

MW: You didn’t not want to be a part of it. And then we were up in the mountains, and that was unbelievable. And you were supposed to leave the next day for Florida. You and Robin were supposed to leave. And we were shooting all night, And it was pouring. And we had a tank we had to move from one spot to another. It was just a logistical nightmare, but it was so much fun. Those were the days. Those are the days from Sanctuary, where you remember vividly when you close your eyes and think of it. And “Normandy” was one of those shows where, as Amanda says, the idea of doing that is one of those things we get to do in Sanctuary. Because you can travel through the time periods. And you can play in all of these times.

Damian came in with the idea of “Normandy.” And he bit into it, hard! He started reading books, started doing a lot of research.

AT: His pitch to the network was the best thing ever!

AT: Instead of just sending the logline of “this is what the story is going to be like,” Damian sent a bunch of memos from different people in the war. And it was like Colonel So-and-So sends a message to So-and-So.

MW: … about how dangerous this Helen Magnus was.

AT: But he sent it as a series of secret memos. And it was the coolest way to pitch a show.

MW: And it fell flat.

AT: It was done on old paper, with stamps and seals. I thought it was just phenomenal. And the network was like “Huh? What is this?”

AT: That’s the occupation of Europe. How’s that for a stake?

MW: “Can you do it during the daytime?”

NEXT: Breaking down Sanctuary‘s musical episode, and Tapping addresses the ratings-dropping schedule change…

Hulu Viewers: The Stargate Franchise Is Staying Put (For Now)→