GateWorld: Both of those episodes, “Metamorphosis” and “Normandy” aired in the second half of the season, after Syfy had moved the series from Fridays to Mondays. Obviously, that reduced the viewership overall in the back half of that season. Was it frustrating watching the numbers coming in and seeing the decline …

It’s always frustrating when it’s your show. When you’re so passionate and you’re thinking “Could this move to Monday night kill us?” And if so, then who do I kill?

Martin Wood: You sent a very strongly worded e-mail about it to …

AT: And then I got on the phone.

MW: Saying “This is ridiculous! Why are you doing this to our audience? They all want to know. They all need to know. What’s going on with this thing?”

It was an experiment. And they found that the experiment wasn’t working out the way they wanted it to. So they moved us back. 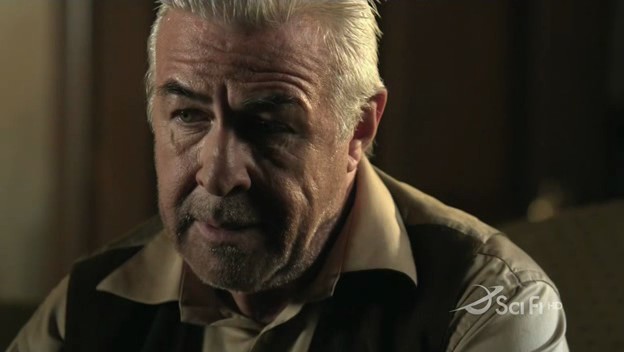 Tapping has nothing but praise for actor Jim Byrnes, who plays Magnus' father Gregory.

AT: It did rebound pretty quickly, but the sad thing is that we lost a lot of audience on some really great shows.

MW: We had one of the top three DVR/PVR recorded shows in North America. Which means that the majority of our audience was on recorded playback, so they watched us later on. We had huge numbers, which really only counts for Netflix and iTunes. It doesn’t count at all for the networks. So when you’re looking at the ratings that we have, it’s not indicative of the audience that we have. The audience that we had was four or five times bigger than what our ratings were.

So, it was an important thing for us to know that we had an audience that was much bigger than the ratings. But the ratings were disappointing, because they were our future. And if we’d been able to contain that audience that was watching us four or five nights later. The network always came to us and said “Your +7’s are great! They’re amazing!” But really they say it the way an old teacher comes up and says “You’re a great student!” They don’t benefit from it at all. Is that a weird analogy? I don’t know where that came from.

AT: Really weird. Over my head.

MW: I had a teacher come up and say that once … so … anyway … continuing! Next question, please! [laughs]

GW: One of the best episodes, in my opinion, of Season Four: “Fugue.”

GW: I know Damian wrote some of the songs.

AT: Damian wrote all of them. Damian and Andrew Lockington wrote all the songs, except for Jim Byrnes and the Irish ballad that Henry sings.

GW: Talk ad nauseum about this episode. I loved it.

AT: We loved it, too! I was freaked out. I was not sure that this was the … what are we doing? A musical episode? Are we jumping the shark? This is crazy! We’re not trying to be Buffy here, are we? But it was so beautifully done and so organic to the story that it didn’t feel like we were cutting to jazz hands. It felt very organic.

The recording of the songs, the whole experience. It was like “Normandy.” It was …

GW: You’ve got a strong voice!

MW: She’s got a beautiful voice!

MW: Andrew Lockington was really impressed. He called right after you guys had finished your recording over at Damian’s and said “Oh, my God! You have this cast of singers in this thing!”

I can tell you my favorite part. [To Amanda] I’ve told you this before. My favorite moment in “Fugue.” I walked into the office and Damian and Amanda were at Amanda’s desk. And Damian was … I really wanted to capture this. Amanda was sitting at her desk. And we shared an office. I realized it was kind of a private moment, so I closed the door and was trying to be very small and in the background. But they were so absorbed in what they were doing. They were going over Amanda’s song. And Damian was going “Da, da, da, da … Abby, can you hear me?” And you were singing with it. And I just sat at my desk going “Oh, my God! This should be preserved!”

Because my favorite moment of “Fugue” was watching my two friends work on this amazing piece of work that was going to turn into a tour de force. And it really did. 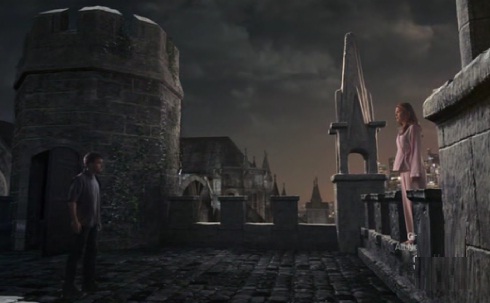 Both Tapping and Wood cite the parapet scene as a highlight of 'Fugue'.

AT: It did. The parapet scene with Will and Abby was so breathtaking.

There were so many moments in it. Sitting there and having Jim Byrnes sing to me and to not be able to look at him … I was bawling. Like, we would cut and I’d be “Aww, Jim! Stop it!” Because he was so lovely. He is such a lovely human being. But such a phenomenal singer.

GW: Tentatively, I’ll see him later today. I’ll have to play that quote back!

AT: Really? There’s not enough words in the dictionary for superbly awesome — or a thesaurus — that describe Jim Byrnes.

MW: We have an Athesaurus on this show … [laughs]

MW: Ryan [Robbins] didn’t record his. He sang it to us.

MW: He sang it live. Because it was the timing.

AT: We were actually all singing live. We laid down a track and then we would all sing. We had these little buds in our ear so we would sing it live without the music playing. And all the crew would hear was our acapella singing.

MW: It was gorgeous. Every time I went down, I’d try to sort of melt into the background to not get into anybody’s eyeline. I didn’t want anybody to be self-conscious that “Old Tin Ears” Wood was there. Just listening to it, I’d come up and go … (sniffling sound). Like the parapet scene.

AT: The parapet scene, the whole crew was crying.

MW: I’ve got to tell you, Amanda. The first time you sang, everybody came down for it. You were in the room but you didn’t realize that the walls of Stage One were all filled with people. All three of you. You and Pascale got to sing.

AT: She’s got such a phenomenal voice. Such a beautiful voice. It was amazing.

MW: Damian Kindler, man. He went for it.

AT: And just recording the songs. One weekend we were recording the songs, the next weekend we were rehearsing on the stage. We were working non-stop on another episode leading up to “Fugue” , and then on weekends coming in and rehearsing “Fugue”. And then we started to shoot “Fugue”. And nobody complained and nobody was tired. Because we were so invigorated by the idea of doing something so different. And so nervous that the crew was going to hear us sing. The crew was all nervous. It was great.

NEXT: Tapping on the current “heart-crushing” hiatus, and why it’s happening in the first place … and more details on Primeval: New World.