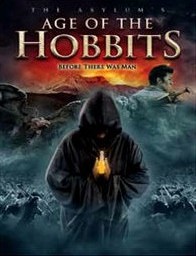 We recently heard from actor Christopher Judge (Stargate‘s “Teal’c”) that he is about to begin filming a new project in Europe.

Today, courtesy of the actor’s official Facebook page, we know that it’s Age of the Hobbits.  The production begins filming in Cambodia this month.

In an ancient age, an enslaved hero escapes his bonds and begins a dangerous quest to claim an enchanted dagger that will free his people. This “mockbuster” is based on a reimagined version of J.R.R. Tolkien’s mythical universe.

A fantasy tale inspired by J.R.R. Tolkien’s The Lord of the Rings, Age of the Hobbits is the latest in a growing genre of “mockbusters” — films very close in theme and title to an impending big-screen blockbuster, released straight to DVD to capitalize on consumer interest and name recognition.

The first installment of Peter Jackson’s long-awaited prequels to The Lord of the Rings, The Hobbit (based on the book by Tolkien), hits theaters in December.

Age producer The Asylum was recently in the news for its movie American Battleships, released to coincide with the theatrical run of Universal Pictures’ Battleship.  Asylum had to change the name to American Warships after Universal sued. (The B-movie was later aired on NBC-Universal-owned Syfy Channel.)

There’s no word yet on whether Asylum will have to tangle with the Tolkien estate on this one, as well as film studios New Line Cinema and MGM.

Read more about the “mockbuster” phenomenon in a piece at The LA Times.

In the meantime, be on the lookout for Judge’s appearance in a slightly higher profile picture: The Dark Knight Rises opens in theaters tomorrow.

he should try to become a voice actor

Assuming you are not being sarcastic – Mr Judge IS a voice artist! He was the voice of Magneto in the Animated X men Evolutions, as well as Zodak in He Man(2003 version)and Simon Gray in Action Man.

He does have to pay his Bills.
And he does need to be hired for more quality jobs please.He is a great Actor and we all love him.