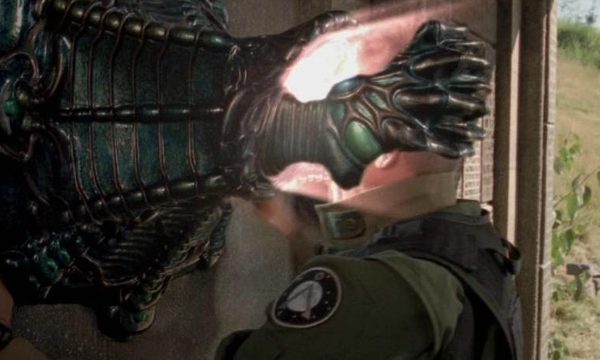 Syfy Channel in the U.S. is set to air a huge, 22-hour marathon of some of the best-ever episodes of Stargate SG-1!

Set your watch for 8:00 a.m. on Thursday, August 1, when the marathon kicks off with the 2-hour series premiere “Children of the Gods.”  That’s to be followed by fan-favorite episodes from nine of the show’s 10 seasons (only Season Nine is not represented), including:

Keep tabs on the Syfy Schedulebot for changes.

Already set on my DVR. Can’t wait to watch. God I miss this show.

It seems like its been months since Syfy even bothered to play late-late night and early-early morning airings of stargate episodes, and maybe 2-3 years since they’ve played episodes of SG-1 at 4 or 5 pm. I miss the days when they played re-runs of SGA and SG-1 at 4 and 5pm.

I hope this is an attempt by Syfy to see if there is any interest in Stargate and maybe sign that they’re willing to bring back Stargate re-runs or Stargate in some form.

In a “best episode” marathon? What complete and utter moron made THAT choice?

The Nox wouldnt be in my top 20 but definitely top 3 in the first season. TOrment of Tantalus should be on this list, probably instead.

THIS IS RIDICULOUS! SyFy HAS BANNED the word “Stargate” from their Facebook page!! ANY POSTING placed on SyFy’s Facebook page, containing the word “Stargate” is AUTO / BOT deleted! This is an insult to SG fans, and the ONLY reason that SyFy is showing this marathon, is because the good people from the Facebook page known as “Save Future Stargate Travel” have FLOODED NBC’s Facebook page with requests for MORE NEW SG!! … They don’t want to spend the money on NEW SG, so they order SyFy to throw us a bone, thinking it will shut us up! IT WONT!… Read more »

Hopefully a substantial amount of Stargate fans will turn on Syfy USA to show that people still have a credible intrest in Stargate and if any series should be revied in the future in any shape or form as long as it is not a full reboot like Star Trek is Stargate SG1!

Unfortunately no SyFy where I live but still its good to know that fan support has helped make marathon possible. Although I do agree with comments above regarding the list of what is considered to be “some of the best-ever episodes”.

I hate to raise false optimism, but could Duffy be doing this to test residual demand for Stargate? See if repeat viewings generate demand lime classic Trek did?

Torment of Tant, should be in for season 1. Shame the Ori arc has been ignored. I think Unending is dreadful! Mind you as a UK viewer I don’t get any say anyway.

I watched the entire marathon – even though I have everything on DVD, there’s something about watching it on the air that brings back fond memories – more so, for some reason, than watching Star Trek that I once enjoyed on TV – something I can’t seem to do. I don’t necessarily agree with every choice (The Nox is not a personal favorite, but certainly not the bottom of the barrel.). I was a big fan of all three incarnations of StarGate and found much to like about each variation. While SGU’s first season was slow, I was so glad… Read more »

i wonder how the ratings were for the marathon?

i wish someone big (like steven speilberg) would come and take over stargate. i’m sure *he* could get the gate up and running!!