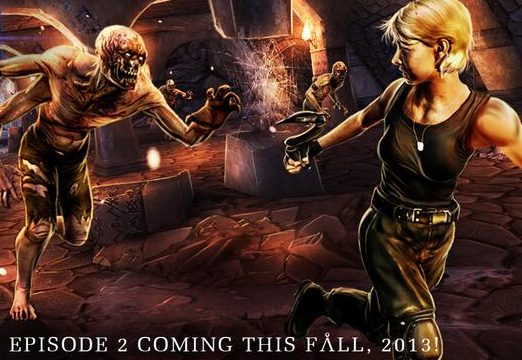 SG-1 will be back in action in another installment of Stargate SG-1: Unleashed, the mobile game from Arkalis Interactive. The studio is hard at work on Episode 2, set to roll out this fall.

The production studio announced the news yesterday via Facebook and Twitter, though it hasn’t exactly been a well-kept secret.

Richard Dean Anderson, Michael Shanks, Amanda Tapping, and Christopher Judge will reprise their roles with voice work as the original SG-1 team.  The teaser artwork shows Samantha Carter (Amanda Tapping) on the run from a horde of zombie-like creatures.

Unleashed is both a video game and a CG-animated story, written by Stargate novelist Sally Malcolm.  It will be available on mobile devices for both iOS and Android.

Episode 1 was released in March (news).

Watch GateWorld for more news on the release!  While you wait, check out Episode 1 of Unleashed at the iTunes Store, Google Play, or the Amazon Appstore

. (Arkalis states that recently-found bugs in the Android version have been fixed.)

I’m sure they did mention a Steam version once

excited about this! Still need to check out the first episode.

I bought, downloaded and played through about half of it. It’s a good game, well it’s more if an interactive story than a game. I had to get it off my tablet because it took up too much room, almost 2gig. But it was fun, and the voice work by the main characters was great.

I bought the first episode and really enjoyed playing through it. It was challenging (but not too hard) and it was great to hear the voices of my favorite characters. I’m looking forward to the second installment