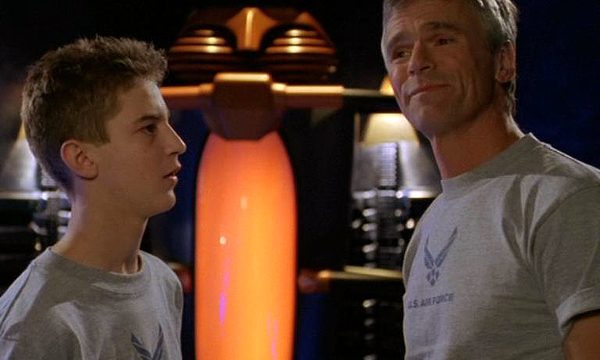 A teenage boy shows up at the S.G.C. claiming to be Jack O’Neill, sending the team on a mission to uncover his true identity.

Great episode Welch, did a amazing job with showing the same mannerisms that RDA shows with O’Neill.

there were fun scenes in the ep, and michael welch did an awesome job, but… i don’t think young jack clone should have lived. i found the ending scene, with our jack dropping off the clone jack at high school… very creepy! this is a 50 something man stuck in a teenage body, eying young girls with a lecherous grin. yes, it was a joke, but truth be told, clone jack would be SO alienated by being *stuck* in this young body… he’d have all the memories of his family, his son, his friends and teammates… i feel the writer(s)… Read more »

@majorsal I didn’t find it would be a prison sentence i thought it would actually be the opposite a sense of freedom. Young Jack has all of the memories of course but it would be a chance to take a different path. He had in his mind given the air force many years of service and this was his opportunity to go back and maybe take up his passion for fishing and boating. Turn it into a career instead of the military. He had retired once now he has retired again but without any thing to hold him back, no… Read more »

I had forgot about this episode. The young actor did such a great job mimicking the original Jack ONeill. I just finished watching it and was thinking what a shock it would be for the young ONeill to have his life turned upside down and have to start all over all the while remembering his past life. Such a great episode.