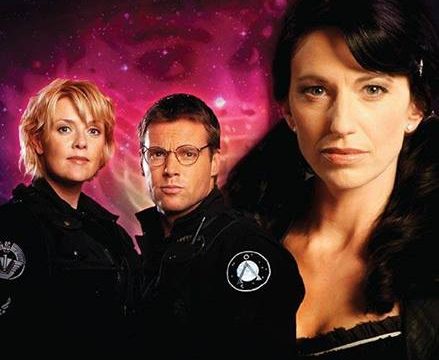 Stargate SG-1: Two Roads by newcomer Geonn Cannon is due out in June. Set after the events of the TV show’s eighth season, the story follows Vala in the search for a treasure (of course) in the days before she came to Earth and eventually joined SG-1.

The Spoils of War

The Goa’uld have been defeated, the Jaffa are free and, in the power vacuum left behind, the dark underbelly of the galaxy is fighting over the spoils.

Among these thieves and rogues is Vala Mal Doran, on the trail of the fabulous treasure left behind by the System Lord Kali. But Vala is not the only one seeking the hoard. Back at Stargate Command, Dr. Daniel Jackson has made a horrifying discovery — a doomsday device designed to exterminate the Jaffa who have dared to defy their gods.

Kali’s treasure might provide SG-1 with the means to disarm the device, but only if they can steal it back from one of the galaxy’s most ruthless criminals. Of course, it’s entirely possible that Vala Mal Doran will get there first …

“I wanted to write about that weird interregnum between Seasons Eight and Nine that was left mostly off-screen,” Cannon said in a Facebook Q&A with Fandemonium. “The Goa’uld were defeated, and suddenly Jack was replaced, Sam was at Area 51, Daniel was going to Atlantis, Teal’c was with the Jaffa … it seemed like there was so much room to explore there just at the S.G.C., not to mention the various goings-on with the Lucian Alliance coming to power.

Vala travels to Earth in the Season Nine opener, “Avalon.”

“I also wanted to show a little bit of Vala’s jump from ship-stealing mercenary to the woman we met in Season Nine. We saw a lot of her growth through the ‘Avalon’ arc, but this was a chance to show her in her element. The book is about the team being aware of the crossroads they’re standing in and deciding what comes next, and being able to let go.”

Look for Two Roads as an e-book and paperback next month. Browse all current titles now at Amazon

, and help support GateWorld with your purchase!

Fandemonium has recently put five popular past titles back into print: Exogenesis, Mirror Mirror, Reliquary, Siren Song, and Survival of the Fittest.

Find out more about the SG-1 and Atlantis original novels in GateWorld’s Books section, and over at StargateNovels.com!

Sounds good. If done well this should be an entertaining read, especially if the tone is kept light and in tune with Vala’s mischievous character.

There’s been an update! The ebook will be available June 12, with the paperback going on sale two weeks later on June 26.