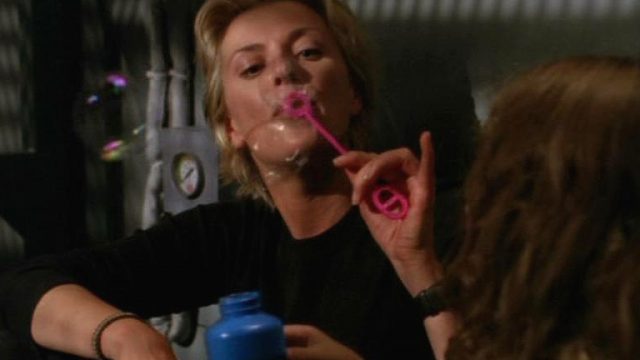 Carter is injured when the Prometheus is attacked by an unknown ship, and awakens to find herself stranded alone in deep space.

(We’re following up on last week’s featured episode of Atlantis, “Grace Under Pressure” — with the original SG-1 episode that inspired it!)

Rewatch “Grace” this week! Then post your comments below, or head over to the “Grace” discussion thread and see what people were saying back in the day. What are your favorite moments?

I found it disappointing, the last time I watched through the franchise, when I looked up and found out that the weapons officer wasn’t actually Grodin. I thought they were introducing an Atlantis character early, kind of like they’d done for McKay and Lorne. I mean, Grace took place a mere half season before Atlantis began. It was almost as if they planned it! But, I guess they didn’t.

i LOVE this episode, as a sam fan and s/j shipper!

and regarding the kiss: it spoke volumes about what sam really wanted with jack, even though she decided to try to move on. and i mean ‘try’, b/c it didn’t work. :p

It would’ve been interesting to learn more about that alien race. Interesting episode.

Was the little girl Grace supposed to be Sam as a child or who?