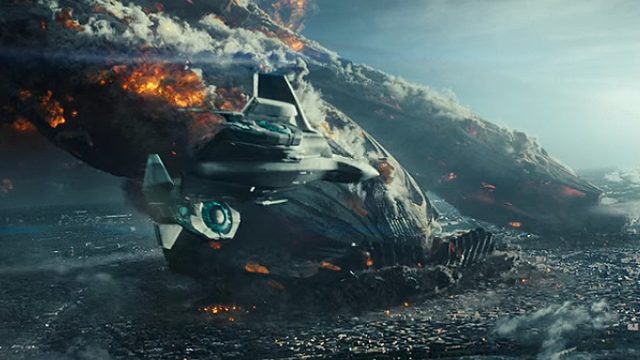 So we can’t help but wonder if this is a sign of things to come for the general look and feel of the newly rebooted Stargate trilogy — the first of which will get Emmerich’s attention in the near future, just as soon as a shooting script is ready to go.

With rock-solid visuals sure to delight audiences, here’s hoping that the story behind the Stargate reboot will be as compelling as the original 1994 film starring Kurt Russell and James Spader and the 14 years of television that it spawned. Screenwriters Nicolas Wright and James A. Woods are reportedly currently at work on the project.

Take a look at the trailer below.

The story of the film is set 20 years after the original, when Earth has capitalized on alien technology left behind after the failed invasion in order to prepare for a possible return. But when the enemy returns in full force, we learn that all our efforts won’t be nearly enough.

The description from 20th Century Fox reads like this:

We always knew they were coming back. After Independence Day redefined the event movie genre, the next epic chapter delivers global spectacle on an unimaginable scale. Using recovered alien technology, the nations of Earth have collaborated on an immense defense program to protect the planet. But nothing can prepare us for the aliens’ advanced and unprecedented force. Only the ingenuity of a few brave men and women can bring our world back from the brink of extinction.