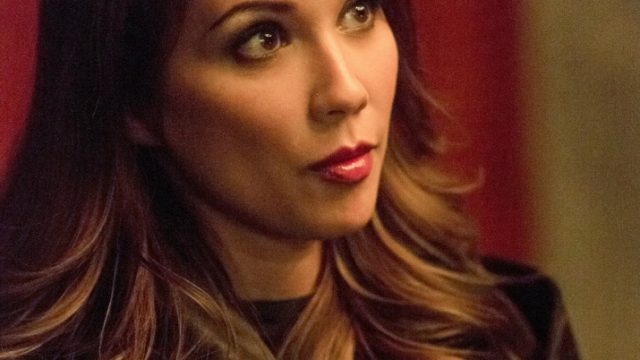 Former Stargate SG-1 actress and sci-fi veteran Lexa Doig will be featured on tonight’s new episode of Arrow, having made her ass-kicking debut at the end of last week’s hour.

As previously reported Doig plays the comic book character Talia al Ghul, a highly-skilled assassin and daughter of Ra’s al Ghul, former leader of the League of Shadows. (That makes her also the half-sister of Nyssa, who is played by actress Katrina Law on a recurring basis.)

So far Talia has appeared in Oliver’s flashbacks, where five years ago he joined Russia’s criminal gang the Bratva in the hopes of killing a man named Konstantin Kovar (played by Dolph Lundgren). In tonight’s episode, titled “Second Chances,” Talia offers to help train Oliver so that he can complete his mission — but for a price.

Doig played the S.G.C.’s chief medic Dr. Carolyn Lam in the later seasons of SG-1, and has starred in such genre favorites as Andromeda and Continuum. She is also married to former SG-1 co-star Michael Shanks (“Daniel Jackson”).

Arrow airs Wednesdays at 8/7c on The CW. Head over to our sister site, SciFi Stream, for our complete episode guide for the current season!

Welcome back! I was worried that you had abandoned the site. :(

Thank you! It’s been an extraordinarily busy three months. Plans to redouble efforts on GateWorld soon and get some more regular content going, in addition to an eventual site-wide redesign.