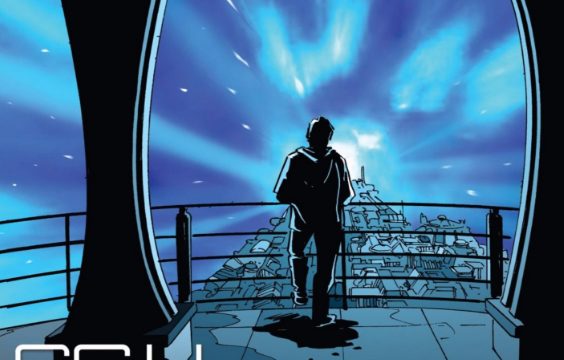 Issue #1 picks up with Eli Wallace alone on Destiny.

Stargate’s return to comic books continues with the launch of Stargate Universe … today!

“Stargate Universe: Back to Destiny” Issue #1 has officially landed at retailers today, after a couple of delays bumped it from a planned May launch (story). Look for it wherever comics are sold, or if you enjoy your comics in digital form you can get it for Kindle — or subscribe at Comixology to receive future issues automatically on release day.

Written by Mark Haynes and J. C. Vaughn, the story picks up where the show left off — namely that gut-twisting cliffhanger in 2011’s “Gauntlet,” in which the entire crew goes into stasis for a long trip across the expanse of empty space between galaxies, leaving only Eli awake to try and repair the final, damaged pod before he is forced to shut down the ship’s life support.

Stargate Universe the comic book begins right where Season Two of the acclaimed science fiction TV series ended, with the crew and unwilling passengers of Destiny set to cross a vast expanse of space with no margin for error. With almost all of the crew of the ancient starship Destiny in suspended animation, only Eli Wallace is left awake to repair his own stasis pod before time runs out.

While he races against time, a new and unexpected danger threatens the fragile plan designed to keep everyone alive and away from the aliens who had been pursuing them. What strange new menace confronts Eli, Colonel Young, Doctor Rush and the others? You’ll have to pick up this issue to find out!

Art and inks are by Giancarlo Caracuzzo and Greg Larocque.

American Mythology’s Stargate comics come with a regular cover price of $3.99 for a 34-page issue. Most issues are released with a “Main Cover” (labeled as such on the cover) as well as several different variants.

“Back to Destiny” #1 so far has five different cover choices by our count, which you can see in GateWorld’s Comics Gallery. (The first cover image shown is an “Issue #0,” which looks like it hasn’t yet seen release.)

Haynes tells GateWorld that a prequel series, “SGU: Icarus,” is expected to arrive later this year and is based on a story outline from SGU co-creator Robert C. Cooper. That series will tell the story of how the characters came to Icarus Base and on to Destiny in the first place.

Next up from American Mythology is Issue #2 of Stargate Atlantis‘s newest storyline, “Hearts & Minds.” Issue #1 is in shops now — so go support your local comic book store!

Keep up with the new Stargate comics here at GateWorld, and check out our newly expanded and up-to-date Comics section!