And we mean “TV” loosely — as in the modern “digital” sense. The series will live exclusively at Stargate Command, the name for MGM’s digital subscription platform launching this fall.

Ten episodes of about 10 minutes each will tell the story of a young Catherine Langford, founding matriarch of the Stargate program.

Read all about Origins here, and take a look at the 30-second teaser just released! 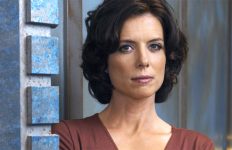 I’m scared she’s going to go through the gate. Though, now that I am thinking about it. I’m not convinced she (any maybe only she) didn’t know it was a transportation device. They seemed ready to go once Daniel Jackson figured out the address. They had the gate powered up and were ready to travel. So it’s possible the gate was activated before the Stargate movie events via some alien device. Catherine used it on some adventure, but then once she returned was not technically, knowledgeable to know what was needed to make it work until decades later. I just… Read more »

@Mrja84 – Of course they’ve used it before, her boyfriend Earnest went through it and got stranded with no DHD. If it’s supposed to be linked, then they’ll have issues as Catherine never knew about him going through it, or even knew it had been activated

This is why we won’t get a Stargate reboot. They want to create a digital platform to make us pay to see everything. I know “some” free content will be there but I’m betting it won’t be much. It’s the same approach CBS is using to hold Star Trek fans hostage.

Is it within the SG1 canon?

If so, maybe this is MGM seeing if there is still demand for SG1/SGA/SGU story.

I hope this leads to a full blown revival of the franchise.

They need to fully revive the franchise. They dropped the ball with the new movie, so they need to reboot or continue the TV series.

I have a strong suspicion that they are going to ignore established story lines and try to get Catherine to go through the gate on the regular. I would prefer to see a new SG show set in the present or future, but still probably pay for this even if I don’t watch it.

I know this thread is now a couple of months old. Has anyone considered MGM is showing this on a pay site? Look at the backlash Star Trek Discovery is facing, also debuting on a pay site. This is NOT how you get your fanbase onboard.