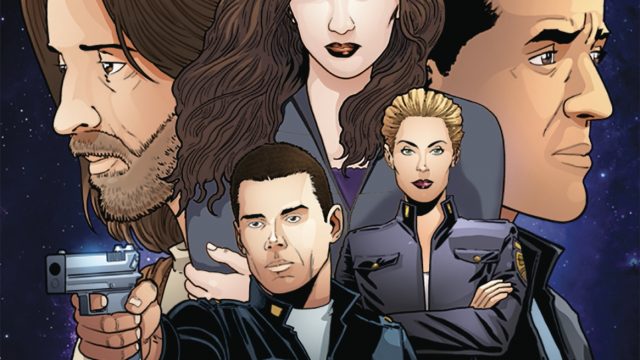 Hope was ignited for the crew of the Destiny when publisher American Mythology announced a new comic series that would continue on beyond the Stargate Universe cliffhanger (and series finale) “Gauntlet,” after the show signed off the airwaves for good in May 2011.

Now American Mythology authors Mark Haynes and J.C. Vaughn are finishing their “Back To Destiny” storyline with a sixth and final issue, scheduled for release this May. This issue will also be their last outing as Stargate Universe writers, with the duo shifting their attention to developing a TV pilot with Roddenberry Entertainment.

Issue #4 is coming soon to comic book retailers, with Issue #5 currently scheduled for April. The final issue will appear later in 2018.

“Stargate characters have such rich backgrounds and experiences that grow over time,” Haynes told GateWorld. “You really feel you got to know them as people in ways other science fiction shows sometimes come close to but never really achieve.”

Originally announced in 2017, “Back to Destiny” garnered considerable press coverage and fan buzz at the prospect of picking up where Stargate Universe‘s cliffhanger left off — with the crew of Destiny in stasis as the ship enters the vast expanse between galaxies, running on only minimal power.

“I think writing SGU in comics was special for me not only because I have a great affinity for the show, but because it gave us the chance to bring a sense of closure that we didn’t get from the television series,” Haynes added. 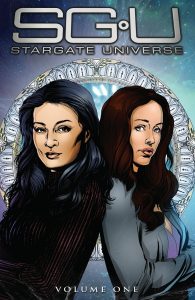 The SGU trade paperback will collect all six issues of the “Back to Destiny” storyline.

The writers also sought to “provide a jumping-off point for more stories” — including a potential follow through on Destiny‘s mission.

Vaughn echoed his co-author’s hope for such future stories. “What we’ve been fortunate enough to do (across our six-issue SGU arc) is position Destiny and her crew to carry that mission further,” he said. “Ideally, readers who experience those six issues should feel like they’ve seen a highly compelling, two-hour SGU movie.”

But an end to the “Back To Destiny” series does not mean the end for Stargate comics at American Mythology. The publisher is still producing a steady stream of Stargate Atlantis comics, and is examining future Stargate possibilities.

Individual issues of “Back To Destiny” can be purchased on Amazon / comiXology or on American Mythology’s website for $3.99 USD. A trade paperback edition — which will compile all six issues — will start shipping in July for $19.99 USD. It is available for pre-order now on Amazon.

Read GateWorld’s review of the first two issues here, and head over to our SGU Comics section to see the full collection.

This report has been revised.

Why was the section about the cancelled Icarus comic removed?

@lightsyder — I was wondering the same thing. Why delete it? Something to hide? Anybody know the author? I’d love to know what they have to say about this!

We had some additional information from another source that contradicted that part of the story, and revised it accordingly. “Icarus” is not officially cancelled at this stage.

Well that’s awesome news! Sounded like it would be a cool read, especially if it’s based on Coopers notes.

My response is in the forum here.

Well, I enjoyed the six-part destiny return. They should continue this considering where that is left off. Hopefully, it does happen otherwise I feel left hanging even more after that continuation.