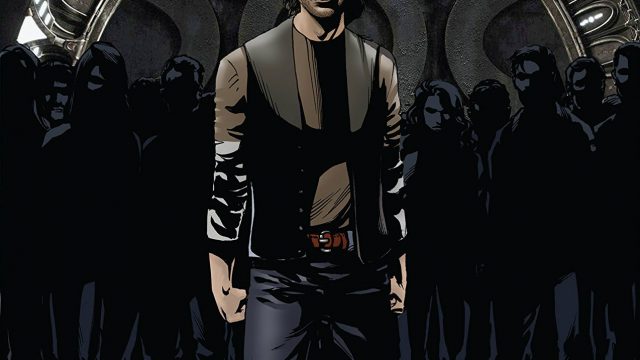 WARNING: The following contains spoilers for Issues #1 and #2 of “Stargate Universe: Back To Destiny.” Proceed with caution!

When the lights went dim and crew of the Destiny drifted off into the abyss, my heart sunk. Not because I feared for their fate, but because I already knew their fate — they weren’t coming back.

I had grown helplessly attached to Destiny‘s esoteric mission and her ragtag crew. Out of all the stories interrupted “mid-sentence,” this one was by far the most painful to experience. After SGU‘s cancellation I kept holding out hope for an eleventh-hour reprieve, but none came. As I was finally moving on, my love affair with Stargate Universe far in the rear view mirror, something unexpected happened: a comic continuation was announced.

While I know the crew won’t be visiting our TV screens anytime soon, I don’t believe their legacy has to end with the final episode, “Gauntlet.” Their spirit can live on, even if it must evolve into another art form.

Of course, just like any iteration of a story, these comics have to earn the affinity and trust of fans. So how exactly do they measure up to the privileged title of “Stargate?”

In short: very well. But let’s take a minute to examine why exactly these comics succeed.

Two and a half months after the events of “Gauntlet,” Colonel Young is awakened by Eli Wallace. He’s met with a shocking sight — they’re not alone. Five uniformed humans stand before them, working on consoles and examining the recently “defrosted” Young. But it’s not Telford or a resupply team from earth … and it’s not anybody from Destiny. They are — or so they claim — living, breathing Ancients. 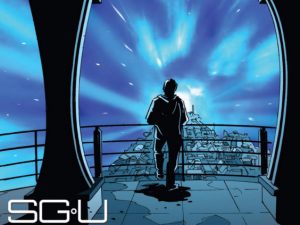 Issue #1 picks up with Eli Wallace alone on Destiny.

The first issue of “Back To Destiny” spends a considerable amount of time recapping (and even re-illustrating) scenes from the final episode and other SGU episodes to help give context to the new narrative. It eats up a lot of valuable page space in that issue, and given the distinct target audience — Stargate fans who are looking for cliffhanger resolution — I doubt readers need this kind of information.

Regardless, seeing past segments of the show illustrated helps bridge the visual and stylistic gap between the TV show and the comics, which in this case is pretty considerable.

The book’s art style has evoked a fiery and polarized response from readers, who are likely expecting a more loyalist approach to character designs. In this series the character illustrations are impressionistic — very angular with harsh lines and no clear desire to replicate the cast’s exact likeness. It took me several pages to recognize these characters as Young, Scott, Eli, Rush, etc.

Still, the comics retain the color palate, steampunk vibe, and gritty signature texture of Destiny, which is distinctly familiar to anyone who has seen SGU. And while the new designs of these characters may be difficult to accept, their characterization is not.

It’s important to remember these are not the writers who brought us Stargate Universe. They are not using any leftover stories from the writers room, and none of the original creative team is involved with the comics. They are truly “new blood.” Because of this, it’s remarkable how accurately they replicate the tone and characterization. 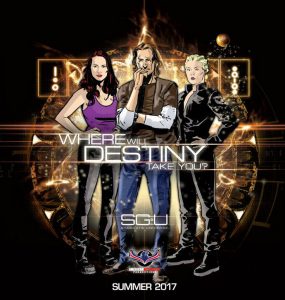 I can often hear and see moments play out as if they were part of the original TV show. Greer, Eli, and Young also have some defining one-liners and character moments that got me grinning, with both issues infusing classic Stargate humor into the narrative (something many fans wanted more of from Stargate Universe when it was on the air).

That’s not to say every beat hits the mark. There is certainly some tonal dissonance as the new writers acclimate to these characters. But it’s limited to a few minor missteps. Perhaps the greater issue is what the comics are covering, not how they are executed.

At this point, we’re a third of the way through the “Back to Destiny” series, and the story is still taking its sweet time to kick into high gear. Issue #1 — apart from the recap vignettes — is largely dedicated to Eli explaining the recent turn of events, and how he discovered the Ancients. Issue #2 ramps up the action, but still spends excessive time getting other characters integrated into the narrative.

Ultimately, these comics feel a little too expositional. They justify their significance through dialogue, and so far are light on story, visual action, and adventure. Perhaps that’s what many fans want — a detailed explanation of how the crew lives to fight another day.

I also get the sense that “Back to Destiny” is laying the groundwork for future installments, which could explain the underwhelming nature of this story so far.

Perhaps the most interesting element is the sudden appearance of the Ancient Engineers. The prospect of a small Ancient crew who were stranded on Destiny during its launch is a fascinating development — and one that offers a lot of thematic parallels to the journey of our own crew. 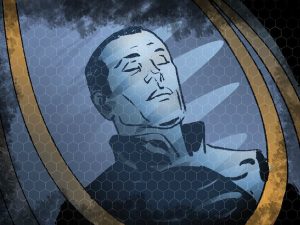 On the other hand, their existence in active stasis pods seems far-fetched given the previous seasons of Stargate Universe. Rush has cracked the master code and Eli has discovered the stasis pod network — so how exactly did they overlook an entire section of active pods, undoubtedly drawing power from Destiny‘s mainframe? Hopefully Issue #3 can explain their oversight.

Notwithstanding such quibbles, if the Ancients remain in the story there is a golden opportunity to enrich the mythology of Stargate in a profound way. The Engineers might be able to shed some light on Destiny‘s mission, or join our crew in their attempt to see it through. Perhaps they will become our trusted allies. Or maybe they’ve been impostors all along!

While their inclusion is a risky creative decision the possibilities are endless. And the comic format might allow for some unique and mythology-centric stories to be told.

To sum things up and get to the question on everyone’s mind — no, this is not canon. MGM has licensed the rights to American Mythology, allowing them to produce and sell comics that depict the characters and continue the story of Stargate Universe. 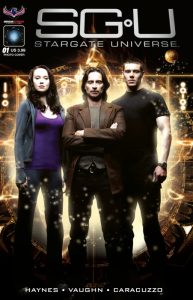 While that might disappoint some, I’d encourage them to look on the bright side: fans are getting a professionally-produced comic series, developed with the blessing of MGM (and the actors), that will resolve that heartbreaking cliffhanger and breathe new life into Destiny‘s journey. We have to accept the decreasing likelihood of Stargate Universe ever returning to our screens, and embrace a new era.

All things considered, I really like these comics. “Back to Destiny” is a different take on SGU that incorporates new voices, fresh artistic interpretations, and worthy dilemmas that will keep readers on their toes, but provide enough familiarity that long-time fans will still feel at home.

I genuinely hope the creative team at American Mythology gets to tell more Stargate stories, and I hope fans of the show will give their work a chance.