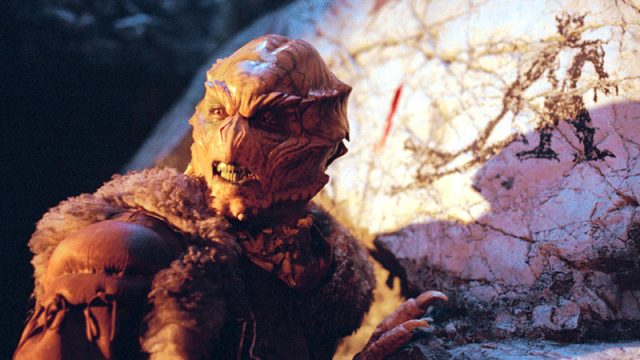 Stargate SG-1: "The First Ones"

In the pantheon of species in the Stargate universe, the Unas have a culture — and a story — like no other. Introduced in Stargate SG-1‘s first season as an ancient, scary monster living deep underground, eventually they would be rebooted as an intelligent tribe of noble warriors.

Leading them would be Chaka, a young Unas who is inspired by his contact with Daniel Jackson to rise up and take control of his people’s destiny.

In this week’s installment of “The Arc” we’re running down every Unas story. Up for a rewatch this week?

Now don’t say Ka until you’ve tried it. Here is the arc: 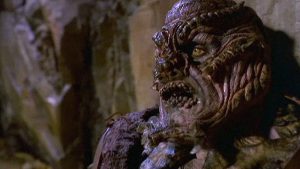 The first appearance of an Unas is in the catacombs beneath the surface of Cimmeria, where Thor’s Hammer teleports Teal’c and Jack. It is a labyrinthine prison for those possessed by a Goa’uld symbiote … and here we learn that Unas were the first hosts to the parasites, before they discovered humans.

Our two heroes fight to escape from the underground chamber while they are being stalked by the creature. (This was also that time most fans forget about, when James. Earl. Jones. guest starred on Stargate! He provided the voice of the Unas.) 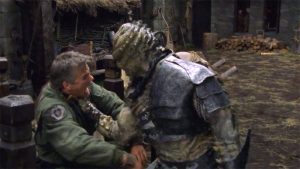 When the Unas return in SG-1’s third season the team discovers that the Goa’uld did not entirely set the Unas aside after taking human hosts. Many of the species still work for them, and are even host to lesser Goa’uld. Here one such Unas servant is sent to a medieval village to collect young people designated for sacrifice. 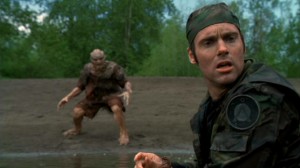 But who are the Unas? SG-1 never really knew who they were as a people until an S.G. team located the original Goa’uld homeworld — where the power-hungry parasites and the Unas lived together. Here a tribe of proud Unas still lives, holding to their ancestors’ ways.

One young Unas, Chaka, attacks the team and takes captive an archaeologist: Daniel Jackson. But as Daniel and Chaka get to know one another, they discover that they have much in common. 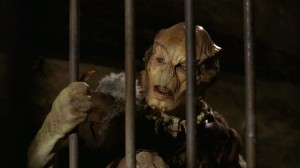 SG-1 finds a group of early-industrial humans who have also learned about the Unas. Burrock and his people have captured many Unas and taken them as slaves. In fact their world used to be controlled by Goa’ulded Unas, who oppressed the humans as slaves. But the humans rose up, and now after many generations they have become the slave masters. 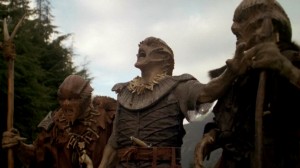 Chaka has helped to broker a peace between the Unas and the humans on Burrock’s planet — so maybe now he can do the same for another group on a different world. On P3X-403 Colonel Edwards and his mining expedition have discovered rich deposits of naquadah, needed to build Earth’s expanding fleet of ships. But the area to be mined is sacred ground to the indigenous inhabitants: the Unas, who aren’t about to let a group of aliens desecrate their home.

“The Arc” is a new feature at GateWorld! Drop us a comment below with your suggestion for a story arc you’d like to see featured here.

Standard scifi language for races is “races,” not beasts or monsters. As this is a Stargate site, respect the Stargate franchise and accordingly change the title of this article to “Stargate Races: A Viewer’s Guide To The Unas”

I have changed the title — certainly no offense was intended to the Unas among us. The original title was simply meant to evoke the episode title “Beast of Burden,” and to reflect the Unas’s story arc: though originally regarded as beasts and monsters, they eventually proved themselves to be much more.

Wow really you get upset about a title of an article. They where in Monster costumes. He can call them what ever he likes as it is his artical. I like the artical and you need a life badly

@chris. He got upset? doesn’t read that way to me. He clearly is trying to protect the lore of the series and your comments are myopic and unfounded. Even the author realized he made a mistake and corrected it. Perhaps you’re projecting.

What a load of garbage. pronoun garbage. Darren do fall victim to these trolls.