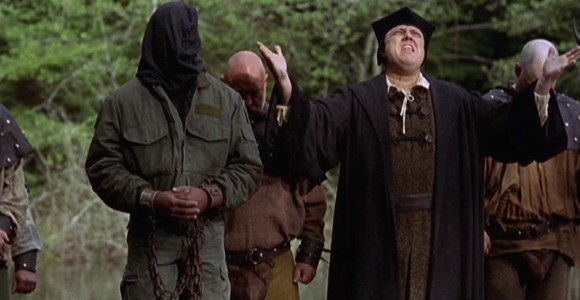 SG-1 finds a medieval Christian society terrorized by Sokar and the Unas, and is accused of being possessed by demons.

SG-1 finds a civilization unlike any they have come across yet: a medieval Christian village on an alien planet. The people are mostly likely descendants of humans taken by the Goa'uld from Earth through the Antarctic Stargate in the Middle Ages.

The villagers hide as O'Neill, Jackson, Carter, and Teal'c enter the village. They find a sick, young woman chained to a post, and try to help her. Simon, a young man from the village, quickly appears holding a cross and pleading for the girl's life. Her name is Mary, and she has been entrusted to his care. Simon believes that SG-1 has been sent from the Devil to take her as a sacrifice.

O'Neill and the others assure Simon that they mean their village no harm, and that they aren't demons. Simon believes them, and takes them into his home.

But the real "demon" soon arrives, stomping through the village and demanding a sacrifice. It is an Unas, a giant creature from a race that served as first hosts to the Goa'uld. The giant beast is like the one killed by O'Neill and Teal'c two years ago ("Thor's Hammer"). At sunrise, he says, he will return to collect the five sacrifices required by Sokar – hosts.

SG-1 knows that the Unas is not a demon, and that the evil Goa'uld Sokar is not Satan. But the villagers cannot be convinced.

It is the job of the village Canon – a religious leader – to choose who will be sacrificed. He is an arrogant fellow, comfortable with his power over the people. If anyone is sick – as Mary is, stricken with nothing more than chicken pox – they are declared to be damned, and given up at the next sacrifice.

Offended by SG-1's claims that the villagers' beliefs about Sokar and the Unas are wrong,the Canon quickly loses patience. He declares that O'Neill, Carter, Teal'c and Jackson are damned, and must be given over to Sokar at sunrise. When they protest, the Canon demonstrates his power: his ring is Goa'uld technology, and causes a lightning bolt to strike the ground in front of them, rendering SG-1 unconscious. The power of God, the people are led to believe, is in the hand of the Canon.

SG-1 is imprisoned, and try to convince Simon to help them. Meanwhile, Teal'c is taken before the village, where he is forced to endure the Trials. The Canon offers proof that Teal'c is a demon. First, he bears a mark insensitive to pain (the golden seal of Apophis on his forehead). Then, Teal'c is chained to a rock and thrown into a lake; if he survives, it is presumed that he is a demon.

Teal'c sinks into the water as his teammates watch helplessly. He does not reappear, and is presumed dead. (Later, his body is recovered and prepared for burial by the village women.)

With the death of Teal'c, the Canon forgives SG-1 and tells them that they are free to go.But the team learns that Mary is still to undergo a ceremony that will kill her. In order to cleanse her soul before the Unas returns, Simon will drill a hole in her head.

Simon asks for their help against Sokar and the Unas. They tell him to bury the Stargate,so that the Unas can never return. He refuses, though – the people are forbidden from going near the Stargate or even looking upon it. Simon decides to perform the ceremony on Mary instead.

O'Neill orders the team to the Stargate, not wanting to further endanger his team by offering help to people who won't listen to them. Daniel refuses to go, and instead heads for Simon's home to try and stop him. If SG-1 leaves now, he argues, Teal'c will have died for nothing. Daniel arrives before Mary is harmed, and offers to take the two back to safety on Earth.

Meanwhile, Teal'c gives the village women a scare by sitting up in his burial chamber. His larval Goa'uld symbiote kept him alive under water; water is the symbiote's natural environment, and it was able to provide his body with enough oxygen to survive. Before being thrown into the lake, Teal'c entered a deep state of meditation.

Finding Mary and the still-meddling SG-1, the Canon condemns them all to be sacrificed to the Unas. They are chained in the center of the village for the rest of the night, and in the morning the beast arrives for them.

As he leads them back to the Stargate, the group makes their escape attempt. They tumbledown a hillside into the woods, and flee from their Unas captor. He pursues them, but Simon shows up with Teal'c's staff weapon and shoots him – three times, but he still does not stop. The wounded but powerful Unas pursues Simon into the forest, while SG-1 and Mary try to free themselves from their chains.

Once free, Carter and Jackson take Mary to the Stargate while O'Neill and Teal'c follow the Unas. The Canon shows up, witnessing Simon bravely stare down the Unas. It falls dead just before Jack and Teal'c arrive, finally succumbing to the staff blasts Simon had delivered.

The Canon is amazed at Simon's bravery, and allows the group to go free. He even gives up his Goa'uld ring to O'Neill and repents of his ways. Carter begins to dial the Stargate back to Earth, but stops short.

"It went in him," she says. Sam realizes that the Goa'uld possessing the Unas did not die,but took over the Canon. He tries to attack them, but is shot dead.

Simon and Mary promise to bury the Stargate, so that Sokar cannot continue to torment the village. The young man kneels beside the fallen Canon, and pronounces over him the Catholic Prayer for Suffering Souls.