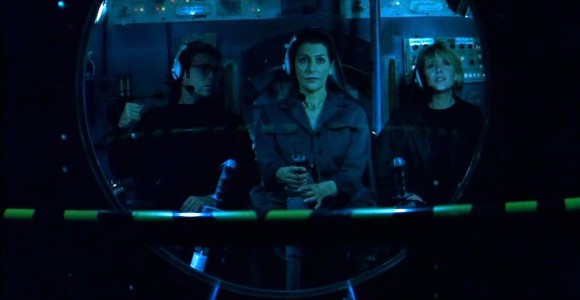 SG-1 prepares to visit a new world, one they hope will be a suitable place to relocate the Enkaran population. But as the Stargate is dialed, the seventh and final chevron fails to lock into place. All diagnostics indicate that the gate is working fine, and that there is no reason why it should fail.

Major Samantha Carter discovers that the base power logs indicate an energy spike about eight minutes before they attempted to dial – similar to when Colonel Maybourne's rogue team used the second Stargate recovered from Antarctica ("Solitudes,""Touchstone"). Seismic activity in Siberia, Russia precisely corresponds with the energy spike, confirming that the Russians have a Stargate.

After confronting the Russian government, Hammond reports his findings to SG-1: the Russians recovered the alpha Stargate from the bottom of the Pacific Ocean. The U.S. swept the area where Thor's ship went down ("Nemesis"), and concluded that the gate must have been destroyed. The Russian navy, however, was on alert after the country discovered the Asgard ship in Earth's orbit. They recovered the gate.

The Russian government has been divided on whether or not to commission a Stargate program of their own. Now, the gate has been connected to another world and cannot be closed. The Russian president was prepared to order the base bombed and the program covered up; but a scientist, Dr. Svetlana Markov, convinced the government to allow SG-1 into Siberia with her to try and find another solution.

The team meets up with Dr. Markov at Kuybyshev Airbase, and learn that she knows far more about them and about the S.G.C. than she should. She explains that their Stargate program has been in operation for 37 days, with Markov as second in command to General Sakalov. They were able to activate the Stargate so quickly because they have the D.H.D. – missing from the Giza dig where the Stargate was discovered in 1928, but recovered from the Germans after World War II.

The five of them fly to Siberia, and parachute in. The base is quiet and dark, and the team soon discovers that all 47 of the people assigned to the project are dead. Some were shot;others died when the commanding officer enacted the extreme measures protocol and gassed the facility.

But the Stargate remains connected to a water planet (where the gate on the other side is entirely submerged), despite the fact that it has no apparent power source (the extreme measures protocol cut its connection to the D.H.D.). The Russians had captured a water sample from the planet, though Dr. Markov was recalled to Moscow before she could examine it. The base officials were under orders not to touch the sample until she returned.

SG-1 must find a way to shut down the outgoing wormhole. Otherwise, they cannot use their own Stargate – and seven S.G.C. teams will remain stranded offworld.

Markov explains that the water sample – now missing from the containment area – exhibited incredible energy properties (giving off energy in the form of heat). Carter theorizes that the Stargate may be drawing energy from the water on the other side to maintain the wormhole. Because a Russian probe on the other side has been transmitting a constant signal back through the gate, it hasn't shut down.

Markov, Carter and Daniel Jackson take a mini-submarine through the gate to the water planet, in order to capture the drone and shut it off. They succeed, and the Stargate deactivates. But when they move the sub to investigate nearby ruins (and thereby try to solve the mystery of why everyone in the Russian base is dead), the sub becomes stuck. The engines blow, and Dr. Markov sets about repairing them.

Back on Earth, Jack O'Neill and Teal'c continue to search the base for survivors. Inside a freezer, they find the person responsible for leaking top secret information on the S.G.C. to the Russians: it is Colonel Maybourne, frozen solid.

They thaw him out, and discover that, miraculously, he is still alive. When O'Neill and Teal'c refuse to let him get to the Stargate, a gaseous life form leaves him and enters Teal'c.

Maybourne explains his involvement in the Russian program to O'Neill, and what they discovered: the water isn't water at all – it is a collection of millions of intelligent, microscopic lifeforms. They are trying to get home. The soldiers in the base tried to stop them, even shooting many of the scientists. It was chaos. The alien lifeforms inside Maybourne forced him into the freezer to avoid the nerve gas released by Colonel Sakalov, and kept him alive.

O'Neill follows Teal'c and tries to stop him from going through the gate and killing himself, but Teal'c throws him aside and continues toward the gate room.

On the submarine, Dr. Markov repairs the engine – but still, the sub will not move. As the pressure around them increases, the glass window shatters. Instead of filling the sub,though, the alien life forms create a solid wall of "water" where the window was. Daniel puts his hand into the water, believing the aliens just want to understand them. But he, and Markov and Carter, are soon pulled into the water.

Teal'c enters the gate room and dials the water planet. The alien leaves his body, and escapes through the gate, leaving him alive. Moments later, the Stargate reactivates and Carter, Jackson and Markov come flying through.

It was, Jack speculates, an exchange of hostages.