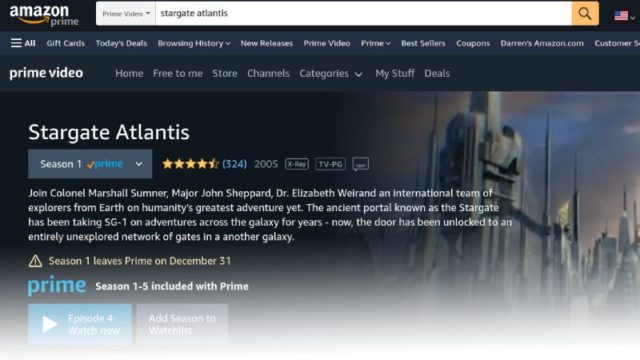 UPDATE: Stargate has received a holiday reprieve, and as of December 31 is no longer listed for removal from Amazon Prime Video in the United States. (This happens sometimes where a streamer and a content provider wait until the last minute to renew their existing deal.)

All seasons of all three Stargate television series will no longer be available free with Prime in the United States at the end of the month. This is according to the shows’ online listings, which now indicate that Stargate SG-1, Stargate Atlantis, and Stargate Universe will leave Prime Video streaming on December 31.

That means Wednesday, December 30 is your last day to watch.

All three series are currently streaming on Hulu, and Stargate SG-1 also recently arrived on Netflix. 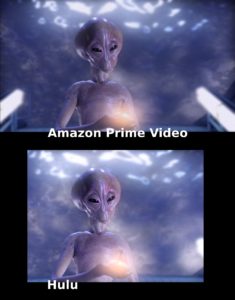 Even for those who subscribe to multiple services, Stargate’s departure from Amazon is a loss. Prime Video is the only streamer to offer what is (by far) the best version of Stargate SG-1 Seasons One through Seven. These early seasons are only available in 4:3 aspect ratio and 480p standard definition video on other streamers. Only Amazon has the clean, 16:9 episodes with upscaled video quality.

Amazon is also the only one of the three services to offer Children of the Gods: Final Cut, the SG-1 pilot movie that was reissued in 2009 with better visual effects … and the full-frontal nudity cut out. (Not only does Netflix include the original, but as a result it has also erroneously labeled the entire series as “TV-MA.”)

Streaming availability often changes from year to year, as services renew their licenses with Stargate owner MGM or allow them to lapse. In fact Stargate departed Amazon Prime just this past July, and was back by September.

Can’t keep track of where to watch Stargate? Bookmark GateWorld’s “Where To Watch” page! We update it whenever there is a change in streaming availability for viewers in the U.S.

GateWorld receives a commission from products purchased through our Amazon affiliate links. Thank you for supporting independent fan journalism!

Thanks to Tom for the tip!

And then companies complain about illegal downloading…

question is why the f### cant u have a digital product at any time you want.. one thats a decade old that. Its stupid business.

Then it only come back to Prime a few months ago?

“Prime Video is the only streamer to offer what is (by far) the best version of Stargate SG-1 Seasons One through Seven. These early seasons are only available in 4:3 aspect ratio and 480p standard definition video on other streamers. Only Amazon has the clean, 16:9 episodes with upscaled video quality.”

The overall quality is better but 16:9 isn’t good because it’s just cropped 4:3 (the original aspect ratio). You lose the top and bottom of the picture this way. They started filming 16:9 beginning with season 8.

@SirStephenH – This is not the case, as shown in the screencaps of Thor above.

IT is just as bad. If they don’t crop to fake 16:9, then they add extra at the sides. parts of the shot that were never intended to be seen. AT BEST it is useless information. At worst, if not careful, it means seeing crouching crew members or equipment.

Let me guess…you are the type of person that uses the WIDE setting on your TV because god forbid there are black bars on the sides of old TV shows.

The comment and insult I’m replying to is an EXCELLENT example of “double ignorance” (Socrates). This is very entertaining, and I’m sure there’s probably a parable about it, something Jack O’Neill and Shamda might know (“Ah, but birds of a feather”, Fallen, Season 7 Ep 01) for a few reasons: The comment shows that the person who wrote it has little understanding of aspect ratios, especially from an actor’s or director’s perspective, but argues about it as if they did, so making the comment not only shows their lack of understanding, but not realizing it, arguing about it, and making… Read more »

Says I need MGM membership to watch it…

Oh god..not this again. It is BETTER to have the ORIGINAL aspect ratio than the faked widescreen IT is amazing. Stargate fans are literally the ON LY ones that want either cropped (therefore missing part of the intended frame) or added frame (therefroe icluding useless parts of the frame) verisons of their show. Simpsons fans literally waed a war for on FXX with The Simpsons World and then Disney to allow them to watch the early seasons as they were always intended. Because literally 99.99999% of people are smart enoguh to know that converting what was 4:3 to 16:9 is… Read more »

I don’t understand why you are on this bizarre aggro kick, lakawak. The widescreen was not faked by cropping a 4:3 image (which is what The Simpsons row was over), nor was “extra” material “added” to the image. The show’s prodution filmed the show in widescreen while simultaneously protecting for 4:3 — and even created digital effects shots in widescreen — so that they would have options for various networks and other distribution outlets. The widescreen episodes were released on DVD starting around 2000, and aired letterboxed on SCI FI Channel starting in 2002. This is all documented. In 2004… Read more »

I am not sure if it means anything, I am fairly new to prime, but I quit getting the message it is leaving prime a day before the deadline is up

Yeah same here! I will find out for sure when I try to continue watching SG-1 later today. Also, Stargate Atlantis seems to be back too.

Good work! I was going to comment about the shows not leaving Amazon. Darren is doing a fantastic job as always.

Thanks everyone for your comments! The “Leaving” flag at the top of the show pages was gone on Dec. 30th, but I still saw a “Leaving in 75 minutes …” notation under the first episode. Today they are all gone, and I can stream normally.

So, it looks like i still have it on my prime… not sure why…

By the way, David Blue is doing weekly rewatches of SGU via Prime on his Twitch channel at 5pm PST on Saturdays.

Sadly outside the US, the Stargate TV series is only available on primevideo. I subscribed for it and also for the MGM and was just rewatching everything again, and now they decide to remove it, damm. If you’re also live outside of the US and love stargate, thankfully, there’s something you can do about it. It’s not a feature that has gotten a lot of attention, but Netflix does have a way for you to request a show or movie that isn’t yet available to stream. All you have to do is log into your account and go to the Help Center. Once… Read more »

February 12, still on Amazon Prime. I switched from Netflix last month because the Netflix has commercials cuts and are the worst things I’ve ever seen.

Leaving the 28th of February now.

And we didn’t get a reprieve this time because it’s now unavailable.

and I was mid season of Atlantis… god damn them

I just want to watch my FAVORITE SHOW! This is RIDICULOUS!

Okay, so it’s not offered free, why can’t I purchase it like I can with movies. I will happily pay for the series, but I don’t want physical discs. I have limited living space and am trying to keep everything digital to minimize space used. The digital copy exists or it never would have been offered on prime video at all. I own digital copies of Atlantis seasons 2 thru 5, however, I haven’t been able to purchase season 1. I don’t get it.