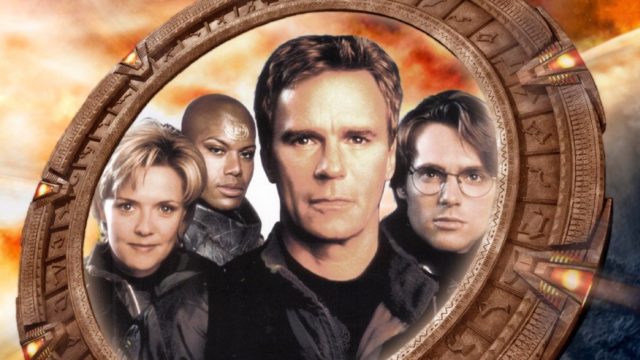 Today is the Day: Stargate SG-1 makes its return to Netflix in the United States, after a multi-year absence from the streaming giant.

Starting today Netflix has all ten seasons of the show available for streaming. SG-1 picked up where the 1994 feature film left off, airing for five years on Showtime (1997-2002) before moving to SCI FI Channel (now Syfy) for another five years (2002-2007). The show built a sprawling mythology, mixing action and adventure with good humor and character drama. 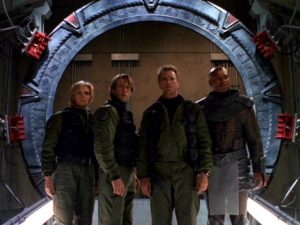 Episodes are also available to download for offline viewing.

A few notes for those who keep track of episode variants:

Hey @netflix it's great that all 10 seasons of Stargate SG-1 are now streaming! But just fyi, I made another newer version of the first SG-1 episode "Children of the Gods" you might want to include as an option for family viewing. It's also, um… better, I think. #FinalCut

English subtitles are available on Netflix as dynamic closed captions.

Aspect Ratio: Netflix’s episodes are presented in 4:3 aspect ratio for Seasons One through Four. Curiously, starting with Season Five they switch to 16:9 widescreen.

Stargate SG-1 was originally shot and edited for both 16:9 widescreen and 4:3 aspect ratios. In the earlier seasons the former aired on premium cable and were released on DVD, while the latter was distributed for nationwide syndication (and later Syfy Channel, when the basic cable channel picked up the series in 2002).

Quality: Netflix’s episodes are presented in 480p standard definition through the first seven seasons. These are clean, digital copies and look good for their era — but they don’t benefit from any remastering or upscaling. 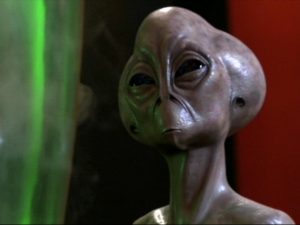 Stargate SG-1 was shot with traditional film cameras through its first seven seasons, switching to HD digital cameras with Season Eight (in 2004). In recent years MGM has upscaled the quality of those first seven seasons to 720p high definition, though the improved visual fidelity is not available everywhere. (In the U.S. they are on Amazon, but not Hulu or Netflix.)

That means that if you live in the U.S. and have an Amazon Prime account, Prime Video is still the best way to watch the complete series.

Outside the U.S., check your local listings and your local Netflix for availability. Rights differ from country to country.

Ready for your binge? Whether you are brand new to Stargate or heading back to the beginning for another rewatch, GateWorld has you covered. We have an extensive episode guide with plot analysis and behind-the-scenes details (which really kick into gear starting in Season Four).

If you don’t plan to watch all 214 episodes but only want to watch those connected to the main storylines, check out our Key Episodes watch list. And be sure to join us over at GateWorld Forum to talk about each season as you go!

Still not on Netflix yet

If you are in the U.S., try the “Netflix” link near the top of this story. I verified all 10 seasons this morning.

Was having same problem but I tried typing in SG1 and found it.

In Romania when will be available?

I’ve looked around and not found any info about sg1 on Blu-ray. Stargate SG-1 The Complete Series #7150 Blu Ray – Visual Entertainment Inc

Its only been out a couple of days. And it seems like Netflix increased the resolution after the first week or so. Curious if the discs are have a better image than the streaming.

Also, SG1 is trending on Netflix. Which cannot be bad.

Thanks, Adam! We’ve been trying to get some intel from VEI or MGM so we can report on exactly what is on these discs. We’ll have at least a preliminary news story up soon on the Blu-ray releases.

Maybe this is old news as I haven’t stayed in the loop with SG1 for a few years. I have all the older dvd’s (the bigger box editions) and thought I’d do a rewatch now that the show is on netflix. A couple of the first season episodes have been shifted around, The Nox is now episode 7 instead of number 12. Was there a reason this was done? Story wise? Sorry if it’s an outdated question but I peaked my curiosity.

One or two episodes per season in the show’s early years have alternate orders, which has nothing to do with story. In the DVD releases the studio tended to follow the syndication order, which I suspect was originally based on production order — so it’s occasionally off slightly from the first cable broadcast order (which I consider to be most official).

Thanks for the reply. It’s been a while since I’ve watched the show in its entirety, and I’m looking forward to the rewatch. I just have to remember to put in the DVD version of Threads! :)

Bring it to Europe! So NOT FAIR! US isn’t the only country in the world you know, so sick of this unfair treatment. And I’m so sick of when I mention I want it on Netflix and people say it is. It’s like they assume US is the whole world. Ugh!

I can’t find it. Wanna rewatch so bad.

Netflix is streaming the 1994 movie Stargate in the wrong aspect ratio so I downloaded a torrent instead. The torrent was in the right aspect ratio.