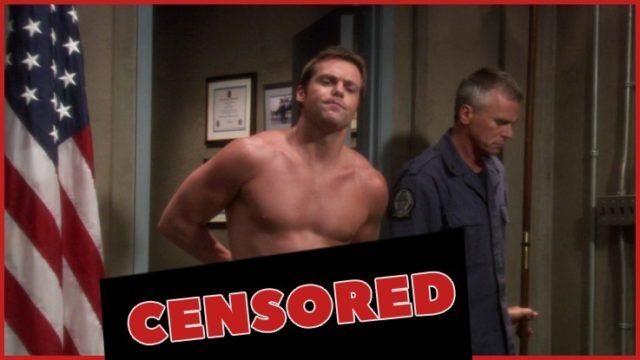 Stargate SG-1 is now streaming on Netflix in the United States … but you may need to wait until the kids are asleep, if Netflix is to be believed.

The streaming giant has listed not only the original pilot episode, but in fact all 10 seasons and 214 episodes of the hit sci-fi series, erroneously as rated “TV-MA.” Stargate is flagged for mature audiences due to nudity, a fact that appears in the corner ratings indicator at the beginning of every single episode — from “Urgo” to “Window of Opportunity” to “Heroes” to “Unending.”

It seems like a bit of a silly oversight … until you realize that the rating will discourage many subscribers from discovering the show for the first time. For those with parental controls enabled, currently no episode of the series can be viewed without entering a pass code. 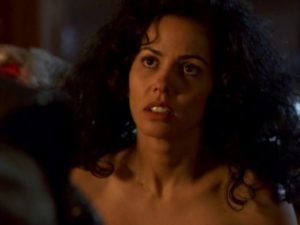 Sha’re’s (Vaitiare Bandera) nude scene is edited without full-frontal nudity in two alternate cuts of the episode. From “Children of the Gods”

In truth the only nudity in the show appears in the pilot episode, “Children of the Gods.” Premium cable home Showtime insisted upon the more mature content in 1997 (over producers’ objections). After the first week it was dropped entirely.

Netflix did not respond to inquiries posted to social media about the error.

Stargate has historically been a family show (once you get past that pilot — something that prompted co-creator Brad Wright to cut out the nudity in 2009’s Children of the Gods: Final Cut). Parents and children enjoyed the show together. Young girls were inspired to go into S.T.E.M. fields. And today an entirely new generation of kids is growing up with Jack, Daniel, Sam, and Teal’c in their family room.

Notably, Netflix and distributor MGM have options for the pilot episode. Three different versions exist, and the other two are already streaming on other services. Children of the Gods: Final Cut already appears on Amazon Prime Video in place of the original episode.

In addition to Wright’s revised edit of the pilot, a syndicated version of the original also exists without the nudity. This copy is streaming on Hulu (where it’s accurately rated TV-14).

The television ratings system assigns ratings not to an entire series, but to individual broadcast episodes. Most episodes of SG-1 are rated TV-14, for fantasy violence.

Until Netflix corrects the error, some families will doubtless keep Stargate on the shelf.

I don’t understand why these streaming services don’t add a feature to edit content for audience ages. Growing up, I loved the G-rated (PG?) version of Airplane! that they showed on TV.

Or if you grew up in Europe …
“Yippe Ka Yay.. keemosabee”

Vudu recently had a Family Play feature that would auto skip sex, violence etc scenes if enabled by the user. It was great, I was watching PG-13 shows like Thor Ragnarok with my 6 year old. They were essentially 90s era cable TV cuts like a lot of us grew up watching. Unfortunately when Walmart sold Vudu the feature was scrapped.

Will
Reply to  David Walters

VidAngel is a service that allows just that; you can link it to streaming services and create custom filters of what things you find objectionable (profanity, nudity, graphic violence, etc). Disney, Fox, and Warner Brothers sued claiming copyright infringement. My understanding is that they settled with those companies and are only doing it through Netflix and Amazon now.

Pity because I think there’s a real market for giving users the ability to decide for themselves what content they want to censor.

looks like i picked the wrong week to quit sniffing glue.

Violence there is, but love even more. It’s like real life and they censor it…

I say let them see what’s what.

Watching now, as I usually do this time of year. On season 7, on Prime video. No such rating. “Drug use” is listed on some episodes, which is funny. Drugs from alien worlds.

Will
Reply to  Rivka

What, are they flagging tretonin? I guess technically it’s a drug, but it’s more akin to insulin than narcotics.

Or it might be helping it.. Wonder how many people see nudity and decide it looks a little bit more interesting

Wasn’t sure from your article if the pilot episode Netflix is airing has the full frontal nudity. Yep, it does. I’m not against nudity, just not in a show I might watch with my fourteen year-old. Luckily, we have free trial Hulu, so maybe we can watch it there and watch the rest on Netflix. Just so stupid that Netflix is not airing the edited version.