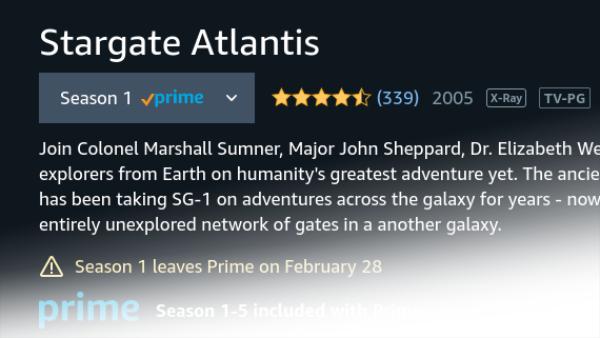 UPDATE: Stargate’s three TV series are no longer available to stream on Amazon Prime Video (U.S.), as of February 28. Visit GateWorld’s “Where To Watch” page to find where the shows are streaming right now.

Rights come and go month to month, so we hope for a return to Amazon later this year. The original story follows.

We’ve been through this before, so take this one with a grain of salt.

Pending any last-minute changes, your last day to binge on the service is February 27.

Fortunately, those who have subscriptions to other services can find all three series also streaming on Hulu. Stargate SG-1 is also now on Netflix. Outside the U.S., check your local listings for the shows’ availability.

Streaming rights are constantly in flux, moving from one service to another as a company’s license from Stargate owner MGM expires.

Amazon lists shows as expiring within the 2-week mark — but that doesn’t mean the license won’t be renewed before the cut-off date. Amazon last listed the Stargate series as expiring in December, but an extension kept SG-1, Atlantis, and SGU on the service into 2021. 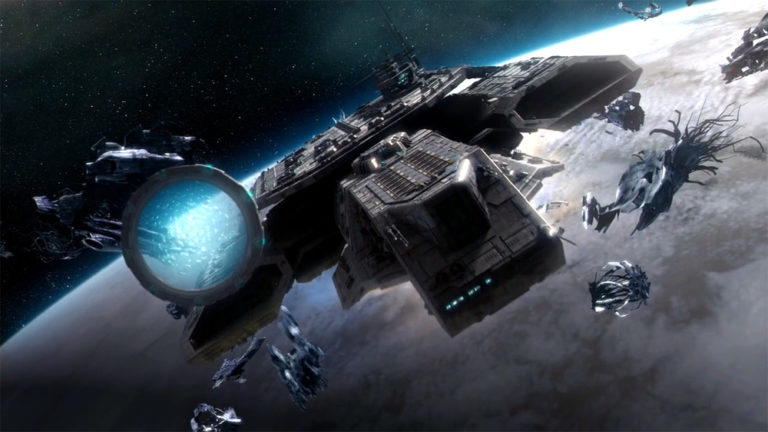 Prime Video does offer the best quality episodes from Stargate SG-1 Seasons One through Seven. On other streamers these early seasons are only available in 4:3 aspect ratio and 480p standard definition video. But Amazon has the clean, 16:9 episodes with upscaled video quality. (In our tests this is pretty close to watching the DVD episodes on a Blu-ray player with upscaling capabilities.)

Amazon is also the only one of the three services to offer Children of the Gods: Final Cut. The SG-1 pilot movie was reissued in 2009 with a new producer’s cut, better visual effects … and the full-frontal nudity cut out. (Not only does Netflix include the original, but as a result it has also erroneously labeled the entire series as “TV-MA.”)

Be sure to bookmark GateWorld’s Where To Watch page for updates on Stargate’s streaming availability.

GateWorld receives a commission from products purchased through our Amazon affiliate links. Thank you for supporting independent fan journalism!

How can it be that MGM supplies any service with the 4:3 episodes? It’s utterly ridiculous.

Correction: “Children Of The Gods Final Cut” is no longer available at Amazon, either prime video nor DVD.

On Amazon Prime Video (U.S.) “Children of the Gods” (under Season 1) is definitely the Final Cut. It starts with the orbital shot of Earth.

Its final cut, the original was broken down into two clean segments, the way this one flows straight through in a 16:9 is all the proof you need that its the Final Cut

Thanks for the post. That is so unfortunate, I has just started rewatching Atlantis! And without Hulu, I won’t be able to finish.

I dont get what the hell is wrong with Amazon and MGM. Just mid way last year amazon did a scifi series popular poll ranking and SG1 was like #4 out of 16 series.

The whole property has been a fan favorite and constantly rewatched, and amazon was the only source of the redone 16:9’s.

When it was leaving in december i was so sad, then it came back, only for me to relive the same feelings again!?

This isnt even a 1 year addition, a 2 month addon for a IP? Who even does that

No last-minute reprieve – looks like Stargate streaming on Prime is “unavailable” as of Sunday morning. :(

I was rewatching Sg1 and SGA from november when the first removal notices started. Im just glad i got through 2 runs of of both before removal. (was starting 2nd SGU run for s**ts and giggles but yeah) Its s***ty and awful but at least netflix has sg1. (Also has original fifth race backwards langauge talking asgard xD) That all said, sg1 has turned into my “fall asleep to noise” on my tablet. The 4:3 original version is a far cry from how great the 16:9 redone version was that was on amazon. Well done Amazon and MGM. Both companies… Read more »

two runs of both in 3 months? Even with a pandemic, you need to get out more. Or get a woman.

Stargate fans are literally the only ones dumb enough to PREFER altered versions of their show. Seriously, what do you think you are getting with your 16:9? It was NEVER INTENDED to be shown in widescreen. Therefore, the director(s) always framed the relevant action within the 4:3 lines on their cameras/monitors. So seeing stuff off to the sides is useless.You are seeing information that is in no way pertinent to the plot. Or worse, they are FAKING widescreen by cropping the 4:3 into 16:9. In which case, you are LOSING information at the top or bottom of the screen. Simpsons… Read more »

lakawak: Your tone whenever you post here is aggressively rude. I’d like you to maintain a modicum of respect for your fellow fans if you want your posts approved. You’ve already been shown that SG-1 was shot in 16:9 with protection for 4:3. The edge of this image is not extraneous material in the eyes of the director, the editor, the producer, or the director of photography. Nor has a 4:3 image been cropped to fake a widescreen image. (I personally saw the monitors on set.) MGM has also never sold 4:3 edits. This edit was probably a concession to… Read more »

Amazon bought MGM. Why is this still not available on Prime Video?