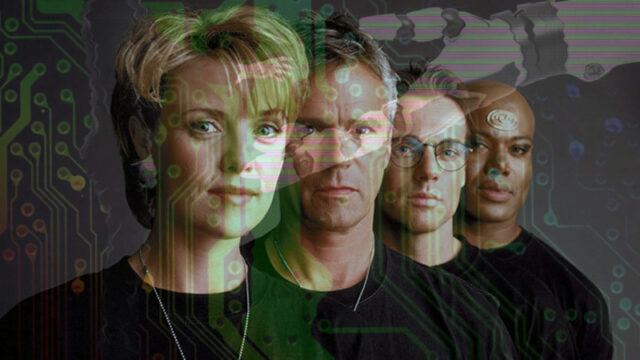 That question is about to be answered for science fiction fans, as The Companion and Stargate’s television co-creator Brad Wright reunite several Stargate cast members for a unique table reading. They’ll each be reprising their beloved characters … but the new script will come not from Wright, but from a Google-powered artificial intelligence.

The table reading will feature cast members from Stargate’s past, returning to their roles for the first time in more than a decade. Meanwhile the A.I. has been fed the whole history of Stargate scripts, and will generate its own original “story” (we hope) and off-beat character dialogue.

Now the event has finally been scheduled: the Stargate A.I. script table reading will premiere online on Saturday, November 6.

— The Companion – Where the Fans Go After the Show (@TheCompanionApp) September 25, 2021

And today Jewel Staite confirmed she is on board as well:

Want more #Stargate? Join me, Amanda Tapping, Michael Shanks, and David Hewlett for a virtual reading of a script written by an AI! Reserve your spot: https://t.co/O59BxeG8uo pic.twitter.com/r4pSuaVhU6

Cast members confirmed for the table reading so far include:

The Companion confirms to GateWorld that this will be a pre-recorded conversation, but the premiere will include some fan engagement and perhaps a bit of Q&A. Spaces are limited for the November premiere, so head over to The Companion to learn more and to subscribe to the online magazine and secure a spot. The site is currently offering a 3-month free preview on an annual subscription.

Can’t wait to bring Daniel Jackson to the table and see what the AI has planned for us….but hey @bradtravelers who do I complain to about the scripts???? 😊😊😊https://t.co/c6nlnCyIin https://t.co/hd8i5Zb0vp

Feeling sad they appear not to be able to get RDA or Chris Judge onboard, SG-1 just wasn’t the same without Jack O’Neill. 😔

Yes, but the guy has retired (RDA). I mean, give him a break, when I’m retired (IF I ever make it to retirement), I would hope to get some peace and quiet too :D

Of course he’s retired, I’m not blaming him for it, I’m just saying it’s disappointing nevertheless this won’t have him when he’s my favorite main character.

It’s a moot point since I don’t subscribe to The Companion anyway so I can’t watch it.

What I’m a bit disappointed about with all this is: for once, as Amanda states herself in her twitter post, after 10 years, there is finally something being done again, even if it is this playful exercise with the AI. But it’s behind a paywall on the companion app. Yes, I know, you can subscribe for a free trial of a few months etc., but still. In the end, if you’ll want more (which will probably come I guess further down the line), you’ll need to pay up. And that disappoints me. Basically part of the fandom goes behind a… Read more »

I am not happy about this, we wait years for anything and all we get is an AI driven script.
I am sick of stargate fans being treated like this

Well, I’m not sure what you’re hinting at.
As far as I understand, this isn’t something that’s being orchestrated by MGM right? It’s an initiative being undertaken by the companion app, which is a private enterprise totally not affiliated with MGM.

So they can do and don’t do what they want I guess? It’s not as if this is some initiative by MGM with a certain agenda or something like that right?

Unless I’m missing something here.

A.I. Writing the script to any Stargate just seems to be wrong on many levels. Don’t get me wrong, I LOVE the idea of the band getting back together for ANYTHING that relates to NEW SG, but this… ?? .. It’s like A.I. Writing a symphony, that Mozart would write if he was still alive. Personally, I don’t believe he’d approve. That being said, if it’s all in fun, and it’s something that can get those with power and a clue involved in taking the next step, the by all means … Table-read away! Aside from that, I guess we’ll… Read more »

“All in good fun” is a good way to describe an undertaking like this. I think Brad is just fascinated with the A.I. as science fiction meets science reality. And I am guessing that the script that it is producing is meant to be awkwardly funny!

I appreciate that The Companion is doing something entertaining, something to keep a light shined on the Stargate franchise, while we’re all twiddling our thumbs waiting — and also actively rallying! — to get MGM and Amazon to get Stargate back into production.

Exactly this :-) With a background in Computer Science myself I’ve been playing with AI lately, currently building a chatbot which is being trained on the dialogs of Rodney McKay and also training a second text-to-speech AI using the voice of Rodney Mckay. The goal is to make it respond like Rodney and make it also immediately sound like Rodney, just as a hobby-project. It’s definitely fun, you wouldn’t believe the kind of weird responses you get from it sometimes. And sometimes, you just get a response where you start thinking to yourself “hmmm, is this thing now really getting… Read more »

Thank you for the response. Fingers crossed for the future! :) J.S.

Thanks Darren — and that’s exactly right. In addition, given the huge attention AI has in the general media, and amongst the target demographic for a show like SG, and given that Sci Fi news is super saturated right now with so many new shows and movies, this is a great way to keep the flame burning. Not only that, wouldn’t you want ‘real’ SG writing to be done properly in a new show with full cast and budget, and not in a fun table read with a few actors? I think this far exceeds the more typical reminiscence panel… Read more »

I was just reading your article on how you tackled this exercise (for those interested: https://laurencemoroney.com/2021/09/24/makingstargateai.html), very interesting read.

Interesting to see that you’re doing this with transformers, I’ve been taking the same approach for my Mckay-trained chatbot: starting from the transcripts of the SG-A episodes here on Gateworld (Thanks Gateworld :)) and use a sequence-to-sequence transformer, trained on the extracted dialogs of Mckay.

Has been a lot of fun to play with.

Thank you for posting Laurence’s link! That’s a great read.

Will this table reading go onto the Stargate youtube channel? My whole family are stargate fans but we are incredibly busy so we might miss it, just need some clarification on it.

No, this is a Companion exclusive. It’ll be up to them where and how they make it available after the premiere, but it will likely be an exclusive for subscribers to their site.