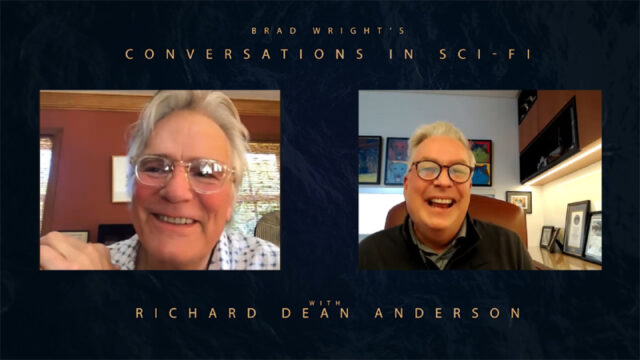 There was just one problem, as series co-creator and executive producer Brad Wright tells it: RDA’s name was too big to fit over the title.

Anderson’s agents negotiated a pretty standard contract for a leading man, who could bring his own established base of fans to the show. His name would appear above the title of the series, both in the opening titles and also on all marketing material.

But the contract also originally required that Anderson’s name also appear in the same size font. That created some real design challenges for advertising the new show.

Watch the video for the full story:

“I remember you laughing your head off when I showed you the poster that couldn’t fit ‘Richard Dean Anderson’ any more,” Wright said. “It could only fit the [words] ‘Hard Dean Anders.'”

The clip is part of their full-length conversation, coming to Brad Wright’s “Conversations in Sci-Fi” podcast. It’s the first video edition of the podcast, which premiered on The Companion last spring.

His conversation with Anderson will premiere as a livestream event for members of The Companion on Saturday, January 22. The video will be available on demand for subscribers on January 23 (which is Anderson’s 72nd birthday), with a shorter cut also available for non-subscribers.

The Companion is an online subscription platform dedicated to science fiction television and film. They produce original articles, podcasts, and more, and have Brad Wright himself as an ongoing contributor. Sign up for a free trial now at TheCompanion.app, or use the code GATEWORLD for an extra $10 off an annual subscription. (With the site’s current 50% discount, that’s $24.99 for your first year.)

Keep your browser locked on GateWorld for more from Brad and Rick’s conversation after it debuts later this month.

Good thing they didn’t go with “Hard Dean Anders”, people might’ve thought the poster was for a very different kind of show…

Question: the shorter cut that will be available to non-subscribers, will that be video or audio only? Most of Brad’s Companion podcasts for non-subs have been audio only but I hope this one is the actual video.

Should be video. This is the first episode of Brad’s podcast that is going to be video, and I believe that applies to both cuts they are doing.

I hope so! RDA looks and sounds pretty spritely so I’m glad to see that. If/when there’s ever a new Stargate show, I really need him to make a cameo at least.

☝🏼This is my other account Darren, but that email address is no more.
Thanks again,
Jeff Davis

Thanks Darren. Hey I see my old comment there and I’m wondering how to add a profile picture to this one⁉️ Please inform me how.
Thanks again,
Jeff Davis

Jeff: If you click on your name in the top right corner of the site you’ll be taken to your account page. Then click the gear icon (upper right), and click on the placeholder profile image to change it.

I think if you use Gravatar (e.g., through WordPress.org) then the system can also find your profile image there.

If this is a major thing then? Did everybody’s IQ just drop 100 points. At the very least Stargate draws many more people then CNN. It has a devoted fan base larger than the hose devoted to mainstream media. The man carried the series through the midst of a turmoil. I’d take a bullet for O’Neal anytime. The question remains is if the stupid executives even have a clue about what loyalty means

Rightfully is my answer. Lol 😂

Richard D Anderson is something else. He’s funny and a great actor. I’m glad he got this part on Stargate and came back for each spin-off series.