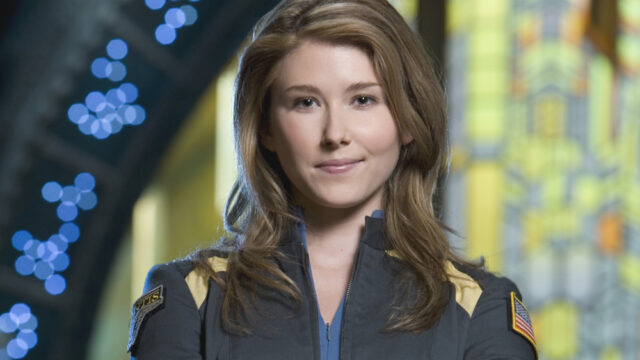 Stargate Atlantis actress Jewel Staite is coming to a livestream near you!

The actress behind Stargate’s Dr. Jennifer Keller, and Firefly‘s Kaylee Frye, will join The Companion for a special Q&A session this Saturday, May 14, starting at 10 a.m. (Pacific time). It’s part of the site’s “Uplifting Women in Film and TV” series (which last year featured her Atlantis co-star Amanda Tapping).

Jewel will talk about her life and career, which started as a child actor before leading to genre favorites like Firefly and Stargate. Today she co-stars with Victor Garber (DC’s Legends of Tomorrow) in the Canadian legal drama Family Law, which has been picked up to air on The CW in the United States.

Jewel made her first appearance on Atlantis as the Wraith girl Ellia in the episode “Instinct.” She then returned to play Dr. Keller in the third season finale, before joining the cast full-time for Seasons Four and Five.

Join me live on Saturday, May 14th for Uplifting Women in Film & TV over at @TheCompanionApp

The Companion is an online subscription platform dedicated to science fiction television and film. They produce original articles, podcasts, and more, including tons of Stargate content. Fans can sign up for a free trial now at TheCompanion.app, or use the code GATEWORLD for an extra $10 off your first year’s subscription.

Saturday’s livestream is limited to The Companion subscribers.

Also coming up on The Companion: Stargate A.I. Version 2.0! Stay tuned for more on the event set for later this month.