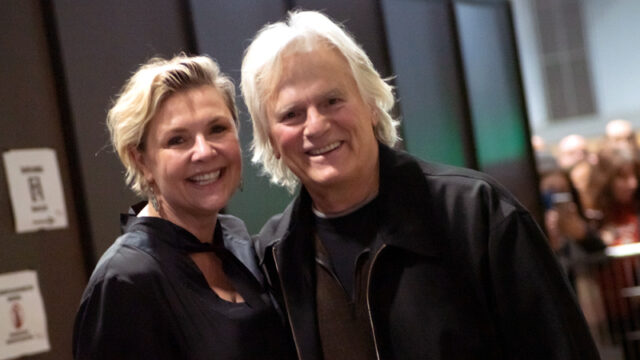 Two of the stars of Stargate SG-1 reunited last week, and it’s safe to say that Sam and Jack fans loved seeing the pair in the world’s most romantic city.

Richard Dean Anderson (“Jack O’Neill”) and Amanda Tapping (“Samantha Carter”) were guests at the Paris Manga Sci-Fi Show, held December 3 and 4. They appeared together on stage for audience Q&A sessions (watch them both below), and signed autographs and posed for photos with fans.

Photographer Brice ANXIONNAZ (Objectif Festival) was on the scene and got some great shots of the actors, which he kindly shared with GateWorld. Here’s just a sample from the full gallery:

To all the fans who attended @ParisManga….. thank you. Thank you for braving the cold and the lines and for still being so gorgeously enthusiastic. My bucket is full. ❤️❤️❤️

Anderson is enjoying his retirement from acting, and was recently seen with SG-1 co-creator Brad Wright celebrating the series’ 25th anniversary with a livestream for The Companion.

Tapping is a busy director, most recently working as a director and executive producer on the fantasy drama Motherland: Fort Salem. She has also directed two episodes of the forthcoming Netflix vampire show First Kill.

Be on the lookout for Tapping’s upcoming visit to the YVR Screen Scene podcast talking about the trip to Paris! Host Sabrina Furminger joined Tapping on the trip, and their conversation will post in January.

I love this so much.

I guess Congratulations are in order, but I’ve always wanted to marry you! I love you.

Rick looks great! In fact he looks just like he did in the S01E09 episode “Brief Candle” before the makeup people made him look super super old (and to be clear I think that he will look better than they made him look once he does reach 80 years old)

Amanda is still as glamourous now at a General’s age as she was when she debuted as a mere Captain Samantha Carter. Wanna marry her!

Richard is a real cutie. I’m currently watching Stargate1 and McGyver. He’s a great and funny actor. I love the humor he put into Stargate.

ABSOLUTELY LOVE STARGATE SG-1. Have watched it 4-5 x the past 5 years.

Thank you for sharing the photos I took in Paris, and thank you to the fans for the feedbacks, can’t wait to see more sg cast members next year in the meantime I wish all of you great holidays !!!

I am so happy to see legends alive and kicking, because they are!
Convetion is always special event , Stargate fans in France are lucky….