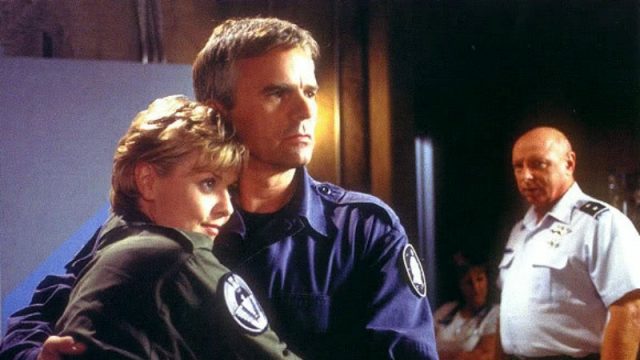 It’s one of the greatest love stories never quite told. Sam Carter and Jack O’Neill are a classic Stargate couple, who developed powerful feelings for each other in their years of service together. But of course Colonel O’Neill was Carter’s commanding officer, and Air Force regulations wouldn’t allow them to ever get together.

Romance may have never played a big part on Stargate SG-1, but the Sam-Jack Shippers have always been a vocal part of fandom. In honor of Richard Dean Anderson and Amanda Tapping‘s appearance together at Wales Comic Con this past weekend, we’re rounding up 10 of the shippiest episodes of Stargate SG-1.

Ready to get your ‘ship on? Here is the arc:

Stuck on a glacier with no hope of rescue. Temperatures are dropping. The Colonel’s leg is broken. No civilization as far as the eye can see. And no matter what Captain Carter tries, the frozen Stargate will not dial out. “Solitudes” is where the Sam and Jack ship started for many fans (if you overlook an uncomfortable locker room kiss back in “The Broca Divide”).

With their fates evidently sealed, Sam gives up the fight and plays into Jack’s delusion that she is his former wife, Sarah. Together to the very end.

The quantum mirror allowed for these classic “what if” stories — alternate timelines where the lives of our characters turned out very different. In this case, Dr. Samantha Carter comes through from an Earth recently conquered by the Goa’uld. She has also just lost the man that she loves: her husband, Jack O’Neill. Now our Jack must handle the mission of freeing another reality from oppression, while Samantha is grieving the loss of his other self. Cue the hugs and tears.

This third season episode isn’t important to shippers so much for what happens between Jack and Sam as it is for what happens when the two are apart. A meteor strikes the Stargate while SG-1 is evacuating the small human settlement on Edora. The gate is buried, and Jack is stranded on the planet for more than three months. But as he eventually lets himself embrace a life he thinks might be permanent — and fall for another woman, Laira — Sam is back on Earth fighting for a way to bring him home.

“A Hundred Days” forced Carter to confront her true feelings for her commanding officer, and how those feelings could impact her job. In that respect, it laid down an important cornerstone for the extended shippy storyline to come in Season Four …

Jack and Sam’s relationship turned a corner in the fourth season, after a mission gone wrong nearly resulted in Carter’s being left behind in enemy hands. But Jack refused to leave her behind — the same thing he would do for anyone on his team, yes. But in the days that followed another crisis forced the two of them to be honest about those feelings they have, but cannot act on.

On the eve of the signing of an historic alliance between Earth and the Tok’ra, one or both groups may have been infiltrated by a za’tarc — a Goa’uld-programmed assassin who doesn’t even know he (or she) is working for the enemy. The only test for this brainwashing is a piece of technology, which reads a subject’s memories and measures whether they are being truthful — even with themselves. Suspected of being a brainwashed by the Goa’uld, Jack and Sam both have to admit that they care about one another … a lot more than they’re supposed to.

Stuck in a time loop, O’Neill and Teal’c realize that they can do pretty much whatever they want without any consequences. They play golf through an open Stargate. They learn Ancient. Jack takes up pottery. And he eats … a whole … lot … of Fruit Loops. But as one loop draws toward its inevitable end, he decides to act on that forbidden love. With only seconds left on the clock he hands General Hammond his resignation, and plants the biggest kiss on Sam that Stargate Command has ever seen.

By the way: That knowing look that he gives her at the start of the next loop? That look stays in the history books, because that is the loop when the cycle is finally broken.

If their ranks and their working relationship are ultimately what keep Sam and Jack apart, what happens when all of that is stripped away? After SG-1 pays a visit to P3R-118 they find themselves not only captives, working in an industrial underground, but also with their memories wiped. Jack, Sam, Daniel, and Teal’c don’t know who they are, but rather have had false identities imprinted onto their minds. As they struggle to discover the truth, Sam and Jack — or “Therra” and “Jonah” — gravitate toward one another.

Eventually Samantha Carter moved on with her personal life, even getting engaged to another man. But a part of her never let go of that love that cannot be. When she found herself stranded, alone in a nebula on a deserted Prometheus (and with a head injury), Sam couldn’t stop her mind from going there. Her friends appeared to her, one by one, as hallucinations. And as she considered her past and her future — if she had one — Sam imagined one, brief moment of closeness with Jack.

After breaking off her engagement to Pete, it’s the moment of truth for Samantha Carter and her feelings for Colonel O’Neill. If there is any way for them to be together, it’s going to take them fessing up and confessing their feelings openly. Carter gets up the courage to drive to Jack’s house, sits in her car for a while working up her nerve, and when she finally speaks with the man with whom she’s been through so much … ahhh, there’s another woman.

Jack is now in a relationship with Kerry Johnson — though, to her credit, she ends their relationship after recognizing what Sam and Jack have unresolved between them. So with Jack eventually leaving Stargate Command to take another post, is the way clear for romance?

You know why this one is on the list. It’s not for an invisible Jack loitering in the women’s locker room. It’s not for the elated look that Sam gives with the General shows up unannounced. It’s one scene and one scene only. It’s a very Stargate wedding, as the Wormhole X-Treme! story spinning turns to the audience’s desire for long-term, on-screen relationships to finally be paid off. There are close friends, an Asgard transporter beam, and … happily ever after.

If Jack and Sam really did get married in the following years, do you think it looked something like this short fantasy sequence? Well at least it makes a fitting end to our list.

If you make use of this list in your rewatch we’d love to hear about it! What Sam & Jack moments from other episodes stand out for you?

We got plenty of post Season 8 hints that they were together! Sam’s comment about being “not exactly” single, her password being “fishing”, having a pic of Sam and Jack fishing in her Atlantis office and another individual picture of Jack in her private quarters, plus of course, the deleted scene from Trio which pretty much confirms that they are in a relationship! Even Sam buying Frooties in Continuum points to their relationship. Plus, Brad Wright confirmed there was a dinner scene in the deleted Revolution movie that would have made it clear they were together, and Joe Mallozzi, Amanda,… Read more »

I’ve seen & read the same things and, as far as I am concerned, they are definitely together. Sam & Jack forever!

Ya, to me they are together. Where was her comment about “not exactly” being single? Now I need to find these episodes!!

Not to mention that he said in one episode (s9 I think??) that he had to come back to sort out paper work for a number of things including the motorbike… which we all know Sam rides

Metamorphosis: when Jack tells Sam to get some rest, she immediately leans into his shoulder.
Heroes: “I’m really glad you’re OK.” + hug
Death Knell: after being rescued from the Kull Warrior, Sam just needs a moment to catch her breath. Jack tells her to “C’mere” and puts his arm around her.
Threads: Jack sits with Sam as she watches her dying father from the observation room. He puts his arm around her and she holds his hand. “Thank you, Sir.” “For what?” “For being here for me.” “Always.”

Awww… great list! They were so good at this. The writers and actors deserve high praise for not giving in to those of us who wanted to see them together. It created a great tension through a lot of the series.

I liked the subtlety of it. It wasn’t too much & overbearing, just a touch here and there so that it didn’t make the show into a soap opera. I’m content. 😔😊

I recommend book Stargate Aschen, free about 300 pages (I think?) story that ships them.

The best sci-fi couple, in my opinion !!!
realize many wallpapers about Sam and Jack.

Always wondered about 200. Why all of Val’s other ideas had herself in the starring role but the wedding idea Sam and Jack were cast as the bride and groom?

Cause even Val shipped them.

One thing that I actually like about the Stargate SG-1 series is the lack of melodrama (romance, etc). So I find it pretty ridiculous that you would leave everything else aside and would try to fish out the fleeting glimpses of romance from what is supposed to be a sci-fi series. Why not watch one of the other hundreds of soap drama if you are interested in romance. Please leave Stargate alone!!

It was clear during the later episodes of Stargate Atlantis, when Carter was in command, that there was no hint of any “getting together” of her and Jack. It never happened and it was better that way. Heck, you could even tell in the Stargate movie when they went to the ceremony to remove the last Ball Gould clone man, that there was nothing between them except friendship and mutual respect for each other. Why do some folks feel the need to believe there was something there other than a deep friendship? Whatever.

I’m offering myself up to write a guide to Teyla Emmagan/Kate Heightmeyer — it’s a story, a sad one, in 5 episodes.

Great idea! I’ll volunteer to do the Jack/Daniel one!

@Darren — can this be turned into a series perhaps?
We already have two volunteers for the next chapters. I’m sure we can find volunteers to write the other gazillion pairings.

What about “There But For the Grace of God”? You’ve got Sam and Jack engaged in that timeline!