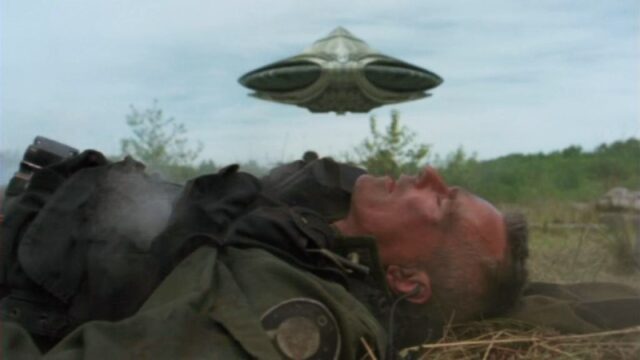 UPDATE: Stargate SG-1 is now back on Prime Video as of January 4, though with the syndication cut of the episodes. Read more here. The original report follows.

As promised, Amazon has yoinked Stargate SG-1 off its Prime Video streaming service in the United States after an all-too-brief stint of four months.

The streaming service actually listed all three Stargate series — SG-1, Atlantis, and Stargate Universe — for removal on December 30, 2022. Now in January of 2023 Amazon made good on its promise to remove all ten seasons of SG-1.

But the good news is that, as of today, all five seasons of Stargate Atlantis and two seasons of SGU are still streaming there. (Atlantis is also still on Hulu.)

To further confuse its audience, Amazon has duplicate listings of each show — one version of which lists them as unavailable for streaming. (Use the links above to find the listings that are currently available.)

For those who don’t mind commercials, the shows are currently available to watch on demand on the ad-supported Pluto TV. Reruns of SG-1 will also start from the beginning on Comet on January 15. 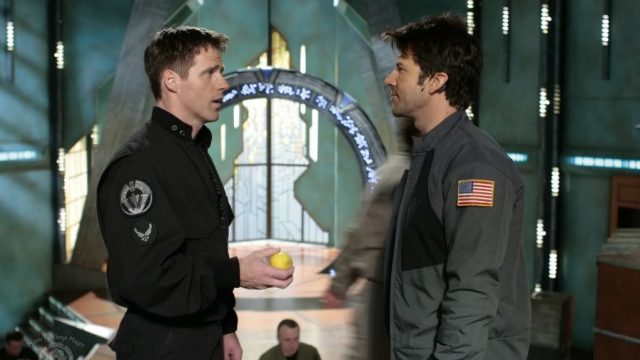 SG-1 and Atlantis cross over in the Stargate SG-1 episode “The Pegasus Project.”

The show’s availability (including on Prime Video itself) varies from country to country. Viewers in some parts of the world can add an “MGM Channel” to their Prime subscription to access Stargate — though that remains unavailable stateside.

MGM and Amazon (which now owns the studio and the Stargate franchise) are relaunching the over-the-top premium cable and streaming service Epix later this month, and it is possible that the renamed “MGM+” could become the new home for the Stargate franchise. The rebranding takes effect January 16, so we’ll be on the lookout for any Stargate-related announcements then.

Meanwhile you can always find where Stargate’s shows and movies are available to stream on GateWorld’s “Where To Watch” page.

I’m not paying for another streaming service just for reruns of SG1, even though I love the show. I’d rather buy the DVDs at a second hand store.

its back on just have to research for it on amazon

I don’t see Atlantis available on Prime either. I’m in the US.

I’m in US, and just started rewatching on Amazon after they took down SG1. Search “stargate” and you’ll find multiple listings for Atlantis, some that are free on prime and others that aren’t. Very confusing, but it’s there.

Confirmed. Depending on user interface access there may be multiple listings. SG-1, Atlantis and Universe are all available with a Prime Video US as of 1/4/23 if you hunt around in the season listings enough.

Seriously though, I have no idea what’s going on over there. I can’t tell if they really are drunk or really indecisive or just plain stupid. It’s like watching musical chairs, the Stargate version. They seem to be pulling and putting back the shows more frequently than most people change their socks. Is Elon Musk secretly running Amazon Prime too?

Sorry to spam but I forgot to say I feel sorriest for the fans new and old who were watching/rewatching and then left high and dry when the show suddenly got pulled off Amazon. One new fan apparently used to watch to make her elliptical session more bearable till poof, SG-1 is gone mid-watch.

I feel like Amazon has gotten bizarrely wishy-washy about Stargate. The question is why? And could it have anything to do with any progression towards making a new show?

It’s a part of a bigger plan. And hopefully that means a new show in the future.

I’d like to believe you but I don’t really think being finicky about putting the shows on Amazon has anything to do with trying to launch a new series. My guess is that they’ve either got their signals crossed somehow or whichever intern they put in charge of Prime messed up. It just makes no logical sense otherwise why Prime is so ridiculous with Stargate lately.

It keeps people subscribed. If you know what you want to watch will always be there you can sub whenever. That makes it easy for people to just have one subscription service at a time. Just pick a new one every month without having to miss anything.

I wonder if it has anything to do with the somewhat recent release of SG-1 on Bluray and wanting those to sell. (I have DVDs and from what I’ve read, sadly, except for the last couple seasons, the DVDs are better, and apparently BDs have audio issues. I’m very bummed about that. I would have gladly upgraded my media.)

shelly
Reply to  Not Jack O'Neill

If you’re talking about the VEI release, that one came out at least a year ago.

Not Jack O'Neill
Reply to  shelly

🤦I must have been asleep longer than I thought! I just noticed it a month or so ago on Amazon.

We need some good news this year! Every day I check gateworld and the bad news on stargate’s future is starting to take its toll. Fingers crossed for something good in 2023.

Pluto sucks. You can’t pause, rw, or ff without getting stuck in a loop. Can’t wait for MGM+

You can’t with the livestream but the entire series is also up on demand on Pluto including the two SG-1 movies.

You can watch it on demand on pluto

I own the seasons that matter, before they turned the show into Farscape:SG1. The last few seasons were not very good.

Buy DVDs for SG-1 (since bluray quality is poor according to comments on Amazon) and bluray for Atlantis, Universe and the movies. (That’s what I did.) I’ve watched all of it a couple times already with my kids. Will probably start again in the spring. (Did the same for BSG, too.)

So what happened to all the hype of Stargate content, once the MGM/Paramount/whatever went through?

Amazon you are a bloody moron

We had previously watched SG-1 so when SGA and SGU became available started watching one or two episodes per night. Then the dreaded leaving crawl. Started binging 7 to 10 episodes during winter break. Finished on the 29th of Dec. Whew. Now SGO has gone missing. Sheesh

Big SG-1 fan and was in the middle of a binge watch. Seriously considering dropping my prime membership during next renewal as Amazon plays musical chairs too often with the programs I like.

Thanks for the update. I can confirm Atlantis and Universe accessibility on Amazon. I’m in the States.

The same happened with StarTrek..they all were moved to a SUBSCRIPTION service, can’t think of the name at the moment.

Anne
Reply to  I am

Makes one wonder why kodi is so popular

Stargate was my childhood. Rest assured i am NEVER going to fund the bastardisation of Stargate the same way Rings of Power did Lord of the Rings. I wilo not pay for Stargate, new or old, until they create something free of identity politics that respects the fans and the legacy of SG1 and SGA.

1/4/23 UPDATE:
SG-1, Atlantis and Universe are all available with a Prime Video US subscription as of 1/4/23 if you hunt around in the season listings enough. Depending on your user interface access (Prime Video app, Fire TV UI) there may be multiple listings for each season of each series. Hunt through them and look for the INCLUDED WITH PRIME tags.

All the stargate shows are back on amazon prime as of 9:00pm 1/8/23. You will have to re-search for them in the browser.