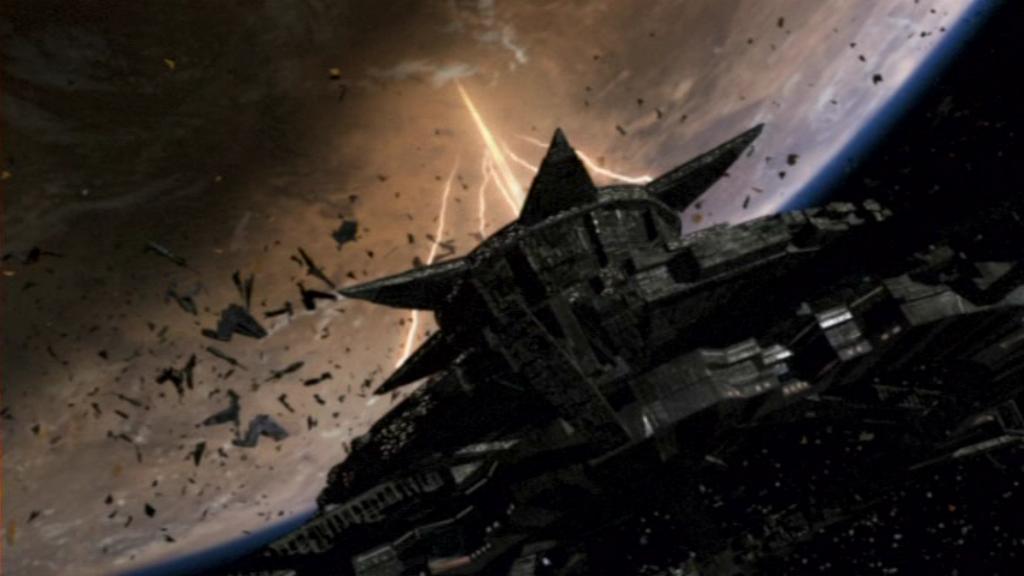 A powerful device constructed by Anubis from his knowledge of the Ancients. It utilized the six Eyes of Osiris, Seth, Tiamat, Apophis, Ra, and one other as its power source. The device was engineered directly into Anubis' mothership.

Once in position in orbit of a planet, the super-weapon would extend from the frame of the mothership. The upper portion contained the firing mechanism, and a lower, circular ring would descend from the center of the ship. Once these three sections were in place the vessel could fire a ray down to the surface of the planet, decimating several kilometers of the crust and sparing no life in its wake.

Another means of executing a firing solution was to launch smaller bursts of plasma energy in various directions out from the ship, generating a chain reaction that was capable of destroying several vessels in one disintegrating blast. This was particularly effective during ship-to-ship combat and less powerful than a planet's surface-destroying super-blast.

The super-weapon was used on at least one occasion, destroying a fleet of System Lords Ha'taks as well as the Abydonian pyramid and the entire Abydonian population. Anubis was reported to have also brought entire Goa'uld domains to their knees with this device in the mean time.

Later, it was about to be used again over planet Vis Uban, but Jack O'Neill and Samantha Carter flew an F-302 under its shield and successfully destroyed the generator before it could detonate again, permanently disabling it of its planet-decimating firepower.

Full Circle - Anubis completes his super-weapon and turns it against the System Lords and the people of Abydos, killing everyone on the planet.
Fallen - Anubis takes his super-weapon to Vis Uban and aims it at the planet, but is disabled before he can use it.
Lost City, Part 2 - Anubis, having re-constructed an identical super-weapon, takes the ship to conquer Earth, but it is destroyed by an Ancient super-weapon.