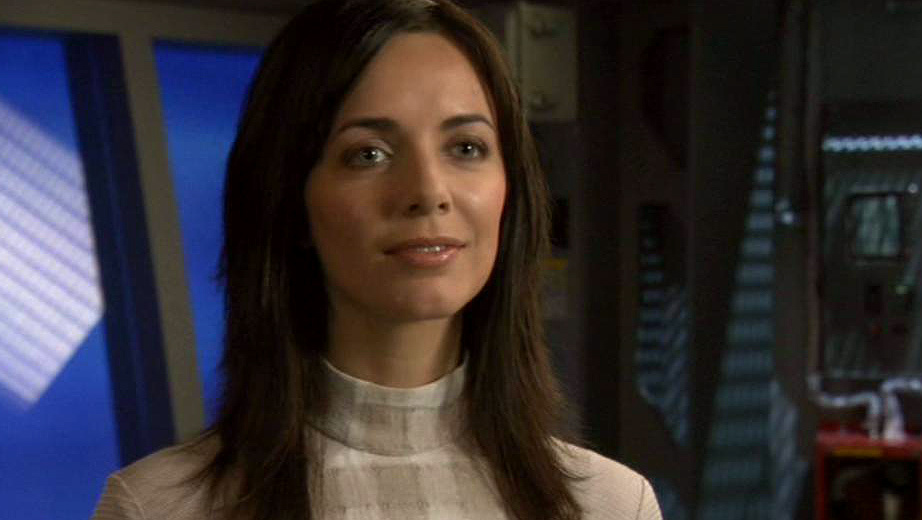 A friendly humanoid Replicator created in the city of Atlantis to be used as a doomsday weapon against Asuras, the Replicators' homeworld in the Pegasus Galaxy. "F.R.An." (short for "Friendly Replicator Android") was created using Ancient technology and named by Dr. Rodney McKay, who needed to find a way to attract Replicator nanite cells together.

Fran was indeed friendly, content with her identity and limited lifespan, always greeting others with a simple and purely genuine "Hello." As an artificial life form, in her short life Fran wished only to fulfill the purpose for which she had been created. Though Rodney and the team wondered if it was right to create a being to be used in this way, Fran never hesitated in carrying out her mission.

Fran activates, drawing trillions of Replicator nanites to her. From "Be All My Sins Remember'd"

Fran accompanied McKay and the team to Asuras on board the Daedalus, and was transported into the heart of a major city during the battle in space. Her mission was an astonishing success: Fran entered a room filled with busy enemy Replicators, greeted them, and activated. Their nanite cells were immediately attracted to her, eventually forming a massive, city-sized blob of nanites. The planet was destroyed, along with the Replicator civilization ... and Fran.

Fran was later reconstituted with the same technology by the disembodied consciousness of Elizabeth Weir's Replicator duplicate. When it became clear that her Replicator companions -- and perhaps even she herself -- were a threat to the city, Fran-Weir sacrificed herself by leading them through the Stargate, knowing that it was actually connected to a gate in outer space. Replicator Weir, in Fran's form, is now drifting in deep space ... perhaps forever.

PLAYED BY - Michelle Morgan
FIRST APPEARED - Be All My Sins Remember'd

Be All My Sins Remember'd - Dr. McKay creates Fran in an Atlantis lab, using her to draw together every nanite cell on the Replicator homeworld and destroy them.
Ghost In the Machine - Dr. Weir's consciousness is reanimated in Fran's template form, and finally sacrifices herself to save Atlantis from a group of angry Replicator refugees.