Ghost In the Machine 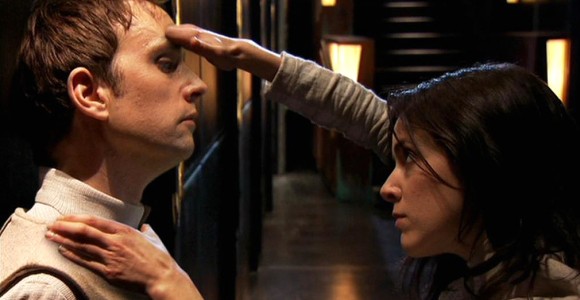 The city of Atlantis becomes host to the minds of disembodied Replicators, led by someone very close to the team.

Departing an uninhabited planet, a candidate for an off-world base, Lt. Colonel John Sheppard, Dr. Rodney McKay, Ronon Dex and Teyla Emmagan approach an orbiting Stargate. As the gate activates, energy levels in the Puddle Jumper spike. Lights flicker. Steering goes out. The drive pods won't retract. Powerless, the Jumper collides with the gate and falls into a decaying orbit over the nearby planet. Another spike disables dialing capability, communications and life support. Then, mysteriously, another bolt of high voltage displacement current flashes through the Jumper and restores all systems. Hastily, the team returns to Atlantis.

As Radek Zelenka and McKay find no problems with the Jumper, Sheppard briefs Atlantis commander Richard Woolsey on the ordeal. As Woolsey goes his own way, he steps into a transporter. Busy with his work, he doesn't notice the flickering lights. When the doors open, he steps out. A safety railing stops him – he's on a balcony overlooking one of the city's piers, far from his intended destination. The transport doors will no longer open, his comm doesn't work, and he doesn't know where he is.

Back in his lab, McKay fields calls from all over the city about bolts of displacement current and flickering lights. City-wide communications and the Stargate go down, and electrical bolts ricochet around the city's control room. Every system is affected. Woolsey finally makes it back to the control room (having walked from the far side of the city), just as the power goes out city-wide. McKay and the science team have no explanation, though it's remarkably similar to what happened to them in the Puddle Jumper.

A lone laptop reboots, and the team watches as garbled strings of letters resolve into the words "HELP" and "ELIZABETH WEIR." Stunned, McKay ascertains that this entity is the same computer malfunction from the Jumper, and that it has overwhelmed even Atlantis's network. Creating a large program to gather the entity in one place, McKay also gives it a voice. It is not just a computer malfunction, but an entity that has inhabited the city – and she claims to be Elizabeth Weir, the former expedition commander who was lost to the Replicators over a year ago ("Lifeline"), and presumed dead ("This Mortal Coil").

Weir recounts her experiences since being captured. Although her nanites replaced her remaining organic cells and remade her into a full Replicator, her consciousness remained intact. Niam's group (rebels seeking to learn the secrets of ascension) understood this when they created human duplicates of her and of Sheppard's team ("This Mortal Coil"). They were saved when the Replicator homeworld imploded ("Be All My Sins Remember'd"). Finally free of their leader Oberoth's oversight, they pursued their goal of ascension.

Their technological nature left them unable to participate in the biological process of ascension – until one of them, Koracen, found a technological solution. By dissolving the nanite bonds, their energy was released into subspace. As pure energy, they should move to the next plane of existence.

It didn't work. As disembodied entities living a tortuous existence, they searched the galaxy for a way to regain physical form. They found other technologically advanced societies that are hiding from the Wraith, but no solutions. They even checked Wraith technology. In the end, Weir knew that Atlantis was their only hope.

Ronon and Woolsey are suspicious. Sheppard wants to place her consciousness in a virtual reality, as they have done with Replicators before ("Outcast"). But before anyone can act, Weir discovers the Ancient device used to create the first humanoid Replicators (which Rodney made use of last year), and creates a body for herself. She downloads her consciousness into the last template stored – Fran, the "Friendly Replicator Android" created by McKay ("Be All My Sins Remember'd").

Even more concerned now, Woolsey wants Weir transferred to a virtual reality. McKay wants to keep her functional, since he created the problem by reactivating Weir's nanite cells and feels he needs to rectify that decision ("Adrift").

Meanwhile, Teyla visits with Weir, sharing news of her son's birth. Tasked with escorting Weir back to the lab, Sheppard is warned that the other disembodied Replicators are now coming to Atlantis. Without enough time to prepare, the city's computer network is overwhelmed and commandeered by Koracen and the others. He demands the use of the Ancient technology to manufacture new bodies. When Woolsey refuses, Koracen starts to submerge the city into the ocean, threatening to kill them all. Woolsey stands firm, declaring that human and Replicator will die together if Koracen persists.

Weir devises a plan whereby basic model Replicator bodies will be built, without the ability to replicate or heal themselves. Once downloaded, they would create the machinery to make mortal, human bodies into which they would transfer their consciousnesses – believing that human element is needed to finally ascend. With strict protocols in place, Woolsey agrees. As the Replicators work on new bodies and download themselves, Ronon, still deeply suspicious, keeps watch. His vigilance pays off when Koracen disrupts power to the city and escapes the containment area.

As Ronon pursues him, McKay tries to regain control. Koracen, unwilling to shift to a human body that will die, wants to find another way – a technological way to ascend. He knocks out Ronon.

Sheppard discovers that not only did Koracen escape, but so did Weir. Now believing he can't trust her at all, he orders the rest of the Replicators destroyed. Lia, acting as spokesman, points out they are still in the containment area, that they are honoring the agreement. Sheppard relents and sets off to find Koracen and Weir, leaving Major Lorne and his men to watch the Replicators closely.

When Sheppard locates them, Koracen tells him that most of this was Weir's intent from the start. Weir truly thought they would be no danger to Atlantis, and so she called them there. Sheppard tells her may think she is Elizabeth Weir, but she isn't. Putting the city in danger from one of its worst enemies proves it. As if to demonstrate she is the real Elizabeth, she pins Koracen to a wall and forces her fingers into his forehead, dissolving his nanite bonds and killing him.

Now convinced that she and her people are a danger, Weir leads her companion Replicators through the Stargate, supposedly to a safe place where they can work on human bodies. But the gate has been secretly reprogrammed – with Weir's knowledge and content – to send them to a space gate. As each Replicator follows her through the event horizon, they drift, deactivated by the cold of space. Something of the real Elizabeth had remained in this Replicator incarnation after all.