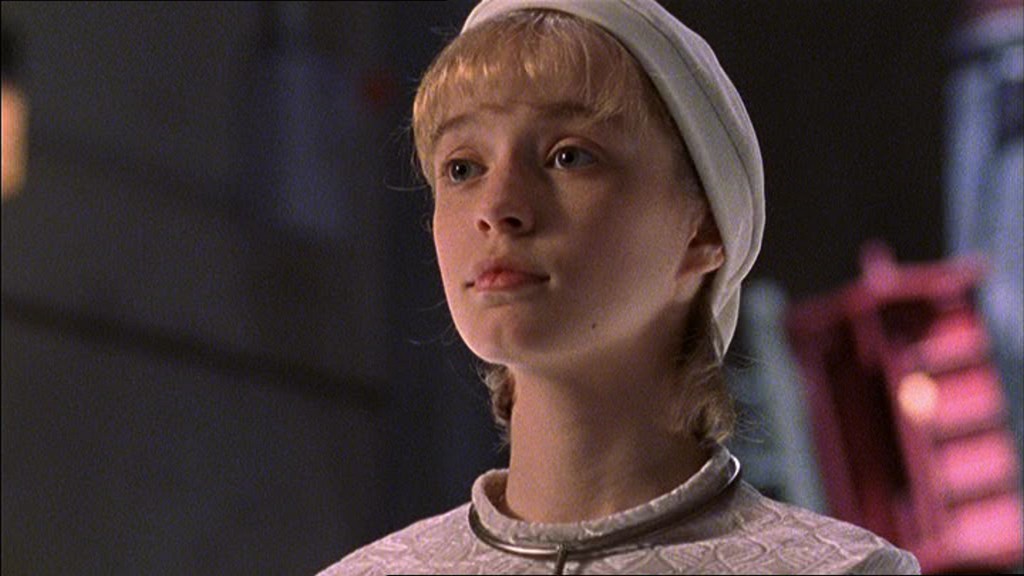 Young Orbanian Urrone on planet Orban. Merrin specialized in naquadah reactor technology. She traveled with Kalan to Earth to open trade negotiations with the Tau'ri in good faith, carrying alongside a rectangular copy of their series of reactor.

Merrin was unfamiliar of the concepts of teaching or fun. Her sole purpose in life was to gain information pertaining to the naquadah reactor technology so that her Urrone nanites could be harvested during the Averium. In the process, each member of the population would receive one of her nanites and become experts on the information.

When SG-1 discovered that Merrin would become, essentially, a soulless vegetable after the Averium, Jack O'Neill and Samantha Carter tried their own ways to communicate their concepts to her. Carter taught her it is more fun and rewarding to discover the answer to a problem than to have it given to you. O'Neill snuck Merrin out of the base, taking her to Mrs. Struble's Colorado Springs classroom to learn the concepts of play, as well as expressing herself creatively.

The consequences were truly unexpected. The society, which originally had been closed-minded regarding answers to the end result of the Urrone children, were suddenly overwhelmed with what Merrin had learned when her Averium was completed. SG-1 traveled back to Orban and discovered everything Merrin had witnessed had transformed the Urrone culture. Children were now playing, laughing, and learning the old-fashioned way. Earth children's games and concepts were now integrated into the very fabric of Urrone society.

Merrin, though now reverted to the frame of mind of an infant, was now drawing with crayons and playing just as Jack had hoped she would.

Learning Curve - Merrin visits the S.G.C. to share her knowledge regarding naquadah reactor technology, finding herself exposed to several foreign concepts that will eventually become a part of her.