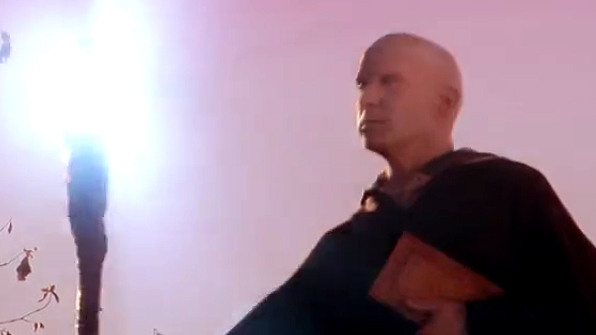 A Prior in the service of the Ori, sent to exact punishment upon the proud Sodan for their betrayal of Origin. Though their leader Lord Haikon had initially agreed to follow the religion of the Ori he soon reneged, allowing SG-1 to lure the Prior Damaris into a trap and test out their new Prior inhibitor technology.

The Prior found the Sodan Volnek on a supply run to a neighboring world, stopping him along the road to the Stargate. After declaring that the Sodan were to be punished he planted his staff into the ground. It shone brightly, and Volnek fell to the ground. Some days later he fell ill, having been transformed into a mindless killing machine that would slaughter almost all of the Sodan people.

Nothing is known about the man before he became a Prior of the Ori. He is presumably a native of their home galaxy.

Arthur's Mantle - Volnek is assaulted by a Prior who proclaims that the Sodan are to be judged for betraying the Ori.
Stargate: The Ark of Truth - The Prior who once punished the Sodan is among those exposed to the energy of the Ark of Truth -- revealing to him the truth about the Ori.