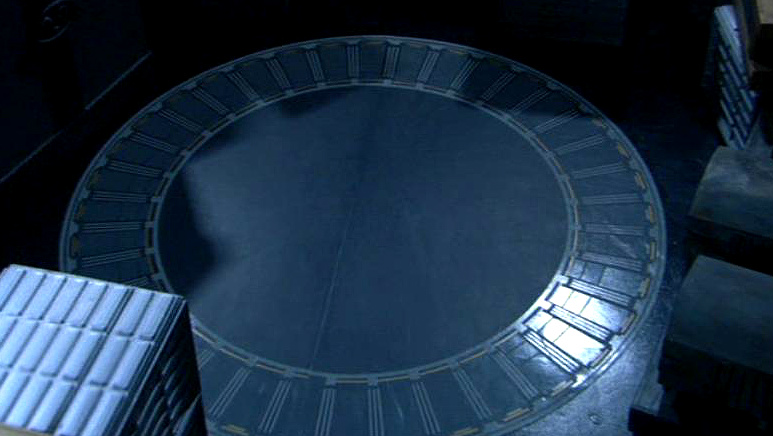 Storage base that houses Goa'uld transport rings when they are inactive. Ring platforms can be installed in the ground, or above in ceilings, or other confines. They are portable, and are equipped with sensors to detect the location of other rings.

Ring platforms are commonly installed in Goa'uld ships, and on Goa'uld controlled-planets. The Tok'ra also use the rings to transport into their underground tunnels.

As the Ancients were the ones to originally develop the technology, their age-old kin the Ori also possess it. An Ori version of the platform can be rapidly deployed on a planet's surface using a fighter craft. It includes its own self-contained power source and is ready to receive troops immediately when used for a rapid planetary invasion.

The Serpent's Venom - SG-1 clears the Tel'tak's ring platform of supplies in order to receive an incoming matter stream.
The Other Guys - A team of scientists, including Jay Felger and Simon Coombs, study ancient Goa'uld rings on the surface of a desert world. They find that the rings are precisely the same, causing Coombs to wonder if there is a Goa'uld factory somewhere that "just stamps these things out."
Homecoming - The Kelownan ring platform, moved to a storage facility along with other Goa'uld artifacts, comes in handy when Jackson and Quinn materialize on the platform after ringing down from Anubis's mothership.
Origin - In the distant Ori home galaxy a Prior uses transport rings to bring Daniel and Vala to the great Plains of Celestis.
Line In the Sand - Teal'c witnesses an Ori fighter deposit an Ori transport rings platform on the surface of P9C-882.