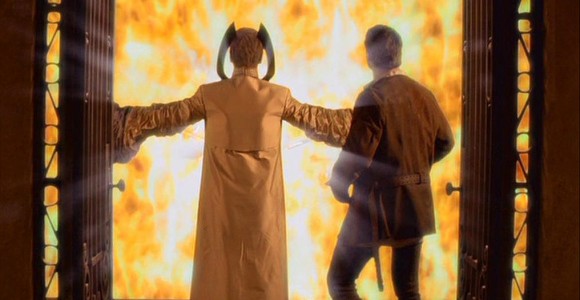 The mysterious Prior of the Ori takes Daniel and Vala by ring transporter to the city of the gods on the Plains of Celestis and locks them away in a dining hall with a copy of the Book of Origin. Back in our galaxy, a Prior is sent to convert the first world in the Milky Way to the Origin religion.

Dr. Lam reports Vala and Daniel's life signs are stable and consistent. General Landry's interest has peaked over the rise of the Jaffa Gerak. He requests that Teal'c extend an olive branch so that they can meet. Meanwhile, the anthropologist stationed on P3X-421 has reported that a man has stepped through the gate and started spouting words of an alien religion. Landry sends Mitchell with SG-12 to investigate.

Daniel has continued to read the Book of Origin, and is making headway into its iconic centerpieces, including the importance of fire. The Prior arrives to ask that they give him names of other individuals from the village of Ver Eger who have wandered beyond the Origin faith. Daniel, however, insists that he speak with the Doci, the chief Prior and mouth of the Ori.

Jackson is granted the audience (with Vala left behind in the dining hall), but he encounters the same opposition as he did with the Prior. Daniel explains his position and his feelings about ascension, that we should all be able to get there of our own free will, but the comments fall on deaf ears. The Doci takes him to the Flames of Enlightenment, a great chasm of fire within the city. There, an Ori possesses the Doci and turns to speak to Daniel. "All will know the power of the Ori."

Back on Earth, Gerak arrives to meet General Landry. The General is eager to begin negotiations for an official treaty with the new Jaffa Nation, but Gerak is preoccupied with the presence of an Ori Prior whom Mitchell and SG-12 has returned from 421. He wishes to hear his claims and challenge him.

Daniel returns to Vala with the bad news. Priors will be sent into the Milky Way to convert all people, and if they don't see the light, they will be cleansed. The Prior returns to the Doci and is given orders to return Daniel and Vala to Ver Eger. Worried that their return will uncover Fannis and his entire resistance, they remain in their home – until Fannis comes to them, demanding that they allow his help. He has known for some time that he may give his life for the cause of truth.

Fannis takes Daniel and Vala to a hidden crate on the other side of Ver Eger. Inside is another Ancient long-range communication device Taking the two stones Vala found, she and Daniel plug them into this device, and briefly wake up on Earth to spread the warning about the deadly Priors.

Daniel and Vala's consciousnesses are sucked back into Harrid and Sallis's bodies, only to witness a Prior wave his hand, choking Fannis. Daniel is flung against the wall, unable to stop the slaughter. Once Fannis is dead, Daniel and Vala are taken to the Ara to be burned to death.

The moment that they returned to their bodies was a useful one. Mitchell and a team of guards return to the briefing room where the Prior has been explaining Origin, only this time they point guns in his direction. Gerak demands an explanation. An SF removes the Prior's staff, but he returns it with a wave of his hand, sacrificing himself in flame until he is gone.

Daniel and Vala's heart rates rise as they are tied down on the Ara, the channel of flame approaching them. Despite Dr. Lee's warnings about removing the device to another planet (it would not end the connection), Mitchell and Teal'c carry the long-range communicator through the S.G.C. to the Gate Room. As the Stargate's unstable energy vortex emerges the two men fling the device into it, disintegrating it.

Daniel and Vala are returned, leaving Harrid and Sallis likely to burn on the Ara.

At the request of the Doci, the Ver Egen administrator arrives to gaze upon the Flames of Enlightenment. An energy field washes over him, transforming him into a Prior. "Great holy armies shall be gathered and trained to fight all evil," says the Doci. "Ships shall be built to carry Ori warriors out amongst the stars and they shall spread Origin to all believers."

Vala uses a crystal key to release the bracelets from her and Daniel. Landry calls them to a meeting, where Daniel admits he is unsure whether or not the Ancients will continue to use their powers to prevent the Ori from attacking the Milky Way directly. But the Priors will still come. They will offer to people what will seem like proof of God. Landry insists to let them come, to use our strengths against their weaknesses.

Major General Jack O'Neill arrives in Daniel's office after finishing up a meeting with Landry. Daniel tells him that for the first time he's scared of the outcome, but Jack insists that he is hungry and the two go to eat.

O'Neill takes Mitchell up for a joyride in an F-302. There, he tells him that SG-1 will be fine. Mitchell kicks on the afterburners.