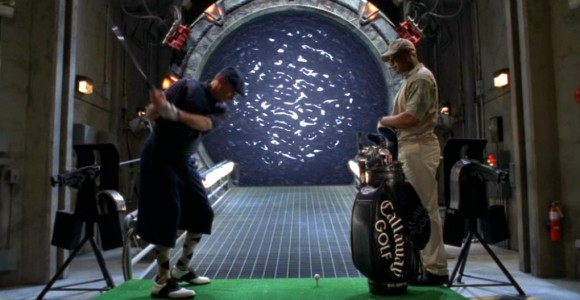 O'Neill and Teal'c are caught in a time loop in the S.G.C., and must relive the same 10 hours over and over again.

SG-1 arrives on P4X-639, an abandoned, desolate world with a blazing hot sun overhead and ancient ruins surrounding the Stargate. They meet Malikai, an alien archaeologist who has been studying the world for many months, first encountered when SG-15 was here two weeks previous. As Samantha Carter sets up equipment to monitor the sun's unique coronal mass emissions, Daniel Jackson examines the alien text carved into the stone walls.

Before Jackson knows what's hit him, Malikai pulls a weapon and shoots him. He activates an alien machine – a stone altar just a few yards in front of the Stargate – which causes abeam to shoot out and hit the Stargate. Jack and Teal'c try to stop him, while Carter rushes to Daniel's side. There is a blinding flash of light, and all is gone. Jack O'Neill finds himself sitting in the S.G.C. commissary, eating a bowl of Fruit Loops.

It doesn't take Jack long to figure out that he's been thrown back in time, roughly 10 hours. He and Teal'c are both experiencing the same day over again. They are checked out by Dr. Janet Fraiser and given a clean bill of health. After they predict the unscheduled arrival of SG-12, General Hammond and the others are convinced they are not delusional. The afternoon mission to P4X-639 is cancelled.

But the move does little good. When a wormhole is established with Earth's Stargate, SG-1 witnesses the energy beam hit the gate. Seconds later, Jack is back in the commissary with Carter and Jackson, eating his cereal.

This time around, though, O'Neill convinces the general that simply scrubbing the mission will not break the loop. They've already tried that. SG-1 goes to the planet and again meets Malikai, who claims to have never met them before. But it isn't long before he gives himself away; Malikai is caught in the same loop, but remembers previous loops. Indeed, this was his goal. With an infinite amount of time at his disposal, he intends to figure out how to properly work the alien time device in order to revisit his past.

SG-1 fails to stop him, and the loop starts all over. Carter comes up with a new plan: if Earth's Stargate is already connected to another planet when the alien time device is activated, it won't be able to get through. The loop will be broken, or at least Earth will be left out of it.

The gate is dialed, but the plan does not work. For an unexplainable reason, the seventh chevron fails to engage – no wormhole can be established. The beam hits the Earth gate again, and everything starts over – again.

In the next loop, Teal'c and Jack approach Daniel. They believe that if he can translate the inscriptions on the altar device, Daniel can turn off the machine. Since there is noway for Daniel to accomplish such a feat in less than a day, he enlists Jack and Teal'c to help him translate the markings.

The alien language, is in fact, a derivative of the language of the Ancients – the advanced race who built the Stargate network. SG-1 has encountered it twice before ("The Torment of Tantalus", "The Fifth Race"), and Jackson knows that it is linguistically similar to Latin.

Loop after loop after loop, Jack and Teal'c study Latin and help Daniel to translate the inscriptions on the altar and the walls surrounding it – making a little progress each time.

Jack becomes increasingly frustrated with repeating the same 10 hours over and over again:the same Fruit Loops, the same conversations, the same task of convincing Hammond, Carter and Jackson that they are all stuck in a time loop. He and Teal'c decide to take a break before they go crazy – especially when Daniel points out that they can do anything they want without fear of consequences.

Jack tries his hand at pottery. Teal'c – who has entered each new loop getting hit in the face with a door – slams it on the airman who continually hits him. And the both of them hit golf balls through the Stargate, despite General Hammond's livid protests.

Finally, before going back to studying, Jack finishes a loop by handing the general his resignation and kissing Carter passionately.

Back in Daniel's office, their translation work is done. The walls on P4X-639 contain an ancient history of the people who lived there: a colony of the Ancients. Many centuries ago, the colony was struck with some sort of cataclysm (perhaps a disease, perhaps something else). They invented the time device to try and alter their history, but could never get it to work. They spent loop after loop trying to perfect it, but it did not work. Finally, the people gave up, turned off the machine and let the inevitable come.

SG-1 returns to the planet to try and reason with Malikai – who in the many loops since has erected a force shield around the altar device. They discover that he is trying to go back many years into the past, before his wife died. He cannot save her (she died of a congenital heart defect), but he does wish to be with her once more.

Daniel tells Malikai about their discovery: the people who built the machine couldn't ever get it to work. They gave up. Carter tells him about her theory: the device is simultaneously accessing 14 Stargates, causing time to loop for billions of people. And Jack, who understands Malikai's pain all-too-personally (having lost his own son), convinces him that he does not want to watch his wife die again. Malikai lets her go, and deactivates the machine.

Back on Earth, the Tok'ra contact the S.G.C. with the news that they've been trying to contact them for than three months. The team may never be sure how much longer than that they were caught in the loop. And although it was a nightmare to relive the same 10 hours hundreds of times, O'Neill and Teal'c had one heck of an opportunity to do the things they never could have done before.