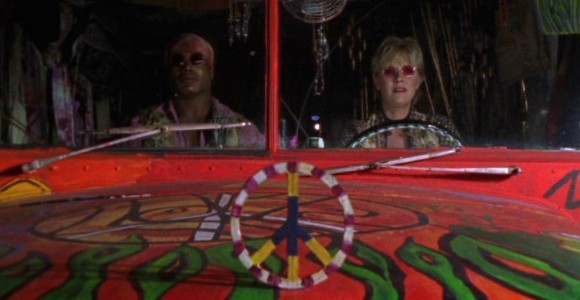 A cosmic accident causes SG-1 to be sent back 30 years into Earth's past, where they must locate the Stargate and find a way home.

General George Hammond is acting a little strange as SG-1 prepares to disembark on a standard mission to P2X-555. He hands Captain Carter a note, telling her not to read it until she's on the other side of the gate.

Sam agrees, and the Stargate is dialed. Carter had to make additional calculations in the computer system – the wormhole traveling between Earth and their destination will come unusually close to the sun this time of year. With the extra gravity accounted for in the computer's planetary drift calculations, SG-1 disembarks on their next mission.

After stepping through the gate, though, the team finds themselves immediately back in the gate room on Earth. A few seconds later, reality begins to warp. The gate and the S.G.C. disappear, and SG-1 finds themselves in a missile silo standing where the gate room use to be. A rocket is about to be test fired right over their heads, until Teal'c disables it with his zat gun.

SG-1 is immediately taken into custody by base personnel. Carter concludes that the gravitational pull of the sun caused the team to slingshot back in time – decades, so it appears, to a time when the lower levels of Cheyenne Mountain were used for missile testing.

Carter demands that they do nothing to change the past or tell anyone who they really are, since it might change the timeline in ways they can't begin to understand. Their goal is to get free and live out the rest of their lives in obscurity.

O'Neill is interrogated, and gives up nothing to the base commander. The team – believed to be Russian spies – is put on a truck and sent from Colorado to New Mexico for further examination.

Meanwhile, a young lieutenant has discovered the note placed in Sam's vest pocket. It reads, "George – Help them," and includes two dates and times.

The soldier arranges for a flat tire during the team's trip to New Mexico. He approaches them in the back while the driver changes the tire. Carter notices the name tag on the officer's uniform: it is George Hammond, their commanding officer at the S.G.C. in 1999.

The team convinces Hammond to listen to his future self and help them. They overpower the guards and escape, after destroying all of their technology. Jack is not content to give up on getting home; the mission is now to locate the Stargate and find a way home.

In fact, years ago Carter was prompted by Hammond to research alternative uses for the Stargate – including time travel. She theorizes that establishing another wormhole to P2X-555 can send them back, so long as they time their trip at the exact moment of a solar flare. This seems impossible, since solar flares cannot be predicted. By the time a flare can be confirmed on Earth, it's already too late.

But Hammond, having met them in 1969 and knowing they would be lost in the past, has given them the information they need: the two dates and times written on the paper pinpoint the minute of solar flares. The General must have used Sam's own research to find a way for them to get back; then he looked up the dates and times of two solar flares in 1969 and wrote them down.

All will be for naught if SG-1 cannot find the Stargate. In 1969, it is sealed up in a government warehouse somewhere. Catherine Langford's father is dead, and she has not yet assumed a position as head of Stargate research. But Daniel knows that she is living in New York.

The team hooks up with a couple of traveling hippies. The two, Michael and Jenny, are driving their bus to a concert in New York before Michael has to join the military and be shipped to Vietnam. O'Neill, Carter, Jackson, and Teal'c join them in their cross-country trip and convince them to help.

The team has about one week to find the Stargate. Once in New York, O'Neill and Teal'c are dropped off at an observatory to confirm that the first time and date do in fact pinpoint a solar flare. Meanwhile, Jackson and Carter locate Catherine – who's father discovered the Stargate in Giza in 1928.

Posing as the son of a German archaeologist with whom Dr. Langford was once associated, Daniel proves his knowledge of the top-secret "Doorway to Heaven" to Catherine. He convinces her to tell him where the Stargate is now – a military armory in Washington, D.C.

With the solar flare confirmed and the Stargate located, SG-1 makes the trip to Washington. They say their goodbyes to Michael and Jenny, with whom they have grown close. The team zats the small number of guards, and powers up the Stargate by connecting it to a car battery.

Teal'c dials the Stargate and establishes a wormhole, but SG-1 is discovered and comes under fire from the guards who have stumbled upon them. O'Neill is forced to order the team through the Stargate a few seconds too soon.

They do find themselves on Earth again – in the Cheyenne Mountain gate room. But now, they are far into the future. The place appears deserted, and large cloths cover objects in the room.

An older woman enters the room, and knows them all by name. Happy to see them again (and to see them looking so young), it is Cassandra, the young girl that the team rescued from a world invaded by the Goa'uld ("Singularity"). She hugs Captain Carter, but must rush them all back through the Stargate.

Finally, SG-1 emerges in the gate room back in 1999. General Hammond welcomes them home, and tells them that he's been waiting for this to happen since he met them. When he saw a large cut on Sam's hand, he knew the time had come; it was the same cut he had seen on her hand when he took off her handcuffs in 1969.