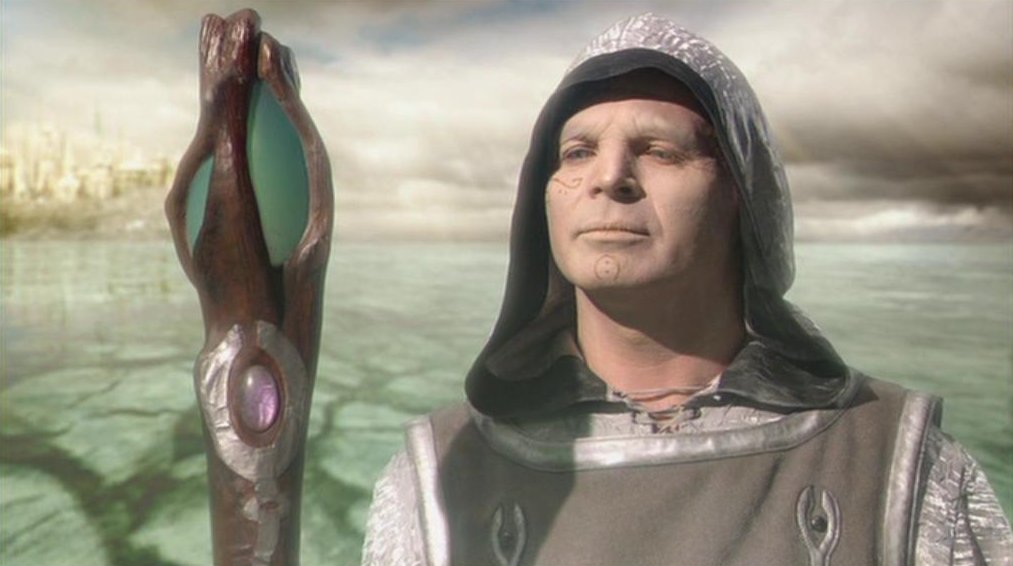 Envoy of the Ori and teacher of Origin. Priors are governed by the Book of Origin, which they often carry with them to give to individuals or entire peoples. They can be distinguished by simple robes adorned with the Ori symbol, ornate tattoos on various parts of their faces and a tall staff.

Priors have been given the secrets of the universe by the Ori to spread the word of their godliness. This gives them great strength, similar in degree to that of a hok'taur. With a single look they can choke and kill, manipulate the wind or pin someone to the ground. They are even capable of reviving the recently deceased.

Priors are given their position by the Ori. They are typically converted from loyal servants, such as long-time administrators of the villages. The transformation process occurs at the city of Celestis where they gaze into the Flames of Enlightenment, the resting place of the Ori.

If a Prior is unsuccessful in swaying a people and is out-manned and unable to reach the Stargate, he is capable of self-termination by a blaze of fire that engulfs him. They are not afraid to initiate this final act, and it is assured that more will come in his place.

Avalon, Part 2 - A Prior enters the village of Ver Eger to take Daniel and Vala to the city of Celestis.
Origin - Priors are dispatched to the Milky Way to convert nonbelievers to Origin.
The Fourth Horseman, Part 2 - The first defense against the Priors, a prototype inhibitor, is successful in disabling a Prior of his half-ascended abilities.
The Shroud - SG-1 discovers that one of their own, Daniel Jackson, has been turned into a Prior of the Ori.
Stargate: The Ark of Truth - When the Ark of Truth is opened, Priors in two galaxies become the vehicles by which the truth about the Ori is disseminated to millions of people.