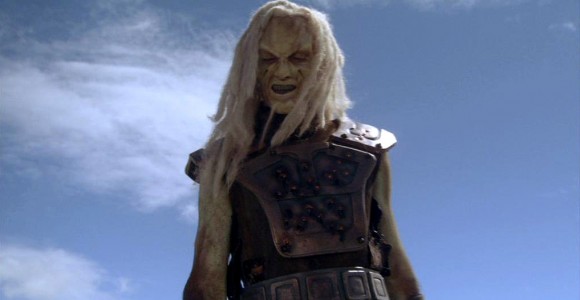 Sheppard's team investigates a downed Wraith ship, and find themselves stuck on a planet with a lone Wraith survivor.

"The Defiant One" is an episode of instincts. While it features more of the scientists instead of the main team, there's very little techno-babble and a lot of action. In the teaser we meet Drs. Gaul and Abrams, who have been chosen to accompany McKay and Sheppard to a weapons platform at the other end of Atlantis's solar system. They're not exactly field-ready, but they found the platform, so they end up on the mission.

Abrams has an instinct that walking into the Wraith ship might be trouble, but he's overruled by the excitement of the other three. The theme continues with Dr. Weir deciding to send out a second team even before the deadline, just because she feels like something is wrong. Then Sheppard has to react quickly when he fights the Wraith to gain back control of the Puddle Jumper. In every part of "The Defiant One," instincts are proven right.

As a result, "The Defiant One" is a very heavy action episode. Sheppard gets to show off his military training and manages to destroy the Wraith in a very -- dare I say it -- Macgyver-esque way. When interviewed, actor Joe Flanigan mentioned that the action scenes were the only time he ever gets a workout, and he definitely does in this episode. While Sheppard doesn't fight the Wraith directly until the very end of the episode, there's a lot of running around in between.

From what little we know of him when Gaul is introduced, he sounds like someone very familiar. He works mainly on computer models, he isn't trained for going into the field, and he's arrogant about his intelligence. I was slightly disappointed, thinking that we were going to be subjected to McKay 2.0. But as Gaul says himself, McKay has changed. He wants in the fight, and aside from everything else going on, it's as an important episode for him as "Hide and Seek." There's a definite change, but he's not quite up to Daniel Jackson levels of a scientist kicking ass -- yet. One of the funniest moments in the episode is McKay asking the Major, "What do I do now?" when he finishes firing the bullets in his gun.

The dark scenery inside the Wraith ship is similar to the darker parts of this episode. By the nature of their characters, viewers know that time is short for Gaul and Abrams. But how Gaul dies -- from his own bullet, instead of living out a half-life that the Wraith leaves him -- was a surprise. The look of horror on McKay's face is all the viewer needs to see to imagine what's there.

It might sound strange to praise a science fiction show for being realistic. But the unsettling question surrounding Gaul's decision is that, faced with the same predicament, how would we react? There's been an unwritten rule for too long that everyone on the protagonist side has to die heroically, and that rule has broken somewhat with Gaul.

A scary detail about the durability of the Wraith drives this episode. The Wraith survives 10,000 years, extreme weather, many gunshots, and a land mine. The creatures seem to be bent on survival no matter what. How else would you explain a Wraith living for 10,000 years off the bodies of his own race, on the off chance that he'll be found? The fact that no one can simply outlast the Wraith in any circumstance makes them that much more frightening. While it's the same actor that played previous Wraith characters -- like the famous "Steve" -- I liked how this Wraith character seemed rougher, more primal than the others.

Finally, I was surprised that this week's planet wasn't standard Vancouver-area fare. It's probably the same area where most of the desert-planet episodes of SG-1 were filmed, but it was shot well enough that I wasn't thinking things like: "Hey, that's where they buried Sha're!"

"The Defiant One" is a great action episode, but with the character growth and tough questions there's a lot more going on here than simply that.