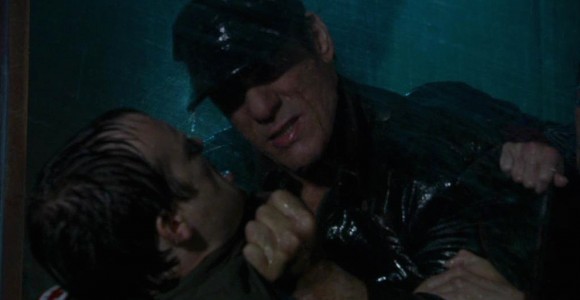 Major Sheppard plays a dangerous game of cat and mouse with soldiers who have seized control of Atlantis and taken Weir and McKay hostage.

"Just in time to see how this ends?"

At the beginning of "The Storm," Major Sheppard and Teyla go out on mission in the Puddle Jumper and return with bad news: two massive hurricanes have converged into a storm that will threaten both the mainland and Atlantis. Surprisingly, McKay, for once, doesn't have a plan. Cue ominous music.

"The Storm" feels like what it's supposed to be: one half of a big story. The ramp-up to the Genii taking control of Atlantis takes up about two-thirds of the episode, so there is a lot of talk and very little action. The story is not boring though, as the constant threatening presence of the super hurricane keeps the team on a deadline. There is even a classic cliffhanger: lives in immediate danger and then -- fade to black and "To Be Continued!" While it's hard to believe that Dr. Weir is any serious danger, we're still unsure of how McKay will manage to save the city while being a hostage, what Sheppard's next move will be, and if Teyla, Ford, and Beckett will be able to get there in time.

"The Eye" is the better episode, but the entire two-parter works better when regarded as the single story that it is. When Sheppard thinks that Genii Commander Kolya has killed Weir, he stops thinking in terms of how to save the city and more about how he can do the most damage to the Genii's plans. Sheppard's attempt to destroy the Genii adds the most action to episode.

The revenge / counter-revenge sentiment between the two is strong, especially when Sheppard tells Teyla that Kolya would kill both Weir and McKay to punish him. It's the conflict between Kolya and Sheppard that keeps the episode going and prevents it from turning into a bunch of scenes about Weir and McKay stalling for time.

Writer Martin Gero tries to flesh out the Genii (previously introduced in "Underground") as a formidable enemy, but the results are mixed. The training fight between Kolya, Sora, and some random Genii seemed pointless until I realized that it was foreshadowing Sora's fight with Teyla. However, the best Genii scene in both episodes is when Kolya makes the point about the arrogance of those from Earth to assume their right over Atlantis. As he says, they're not even from the same galaxy -- the Genii are as equal heirs to the Ancient city as the Atlantis expedition.

Sora, on the other hand, comes off more as a brat than an enemy when talking to Weir about the revenge she'll take out on Teyla, and when she refuses to listen to Kolya and goes to exact it.

I missed the first airing of "Underground," so I felt a little behind on the Genii abilities and motives, but what I've seen is a needed addition to the Atlantis universe. They're an enemy in which the team members can see themselves, an enemy that isn't pure evil like the Wraith. There is also the question about the morality of Sheppard killing over 50 Genii. Sora herself qualifies the body count with the fact that Sheppard was "defending his home and his people, like [Kolya] would." This is what makes the Genii such a necessary component of the how: We'd be bored awfully fast with one enemy, who while really cool-looking, is really one-dimensional.

There are a lot of scenes in both episodes that tell us a lot about how the team interaction has grown in the short time that they've been in Atlantis. Sheppard plays hardball with the Genii, and kills two of Kolya's men when he finds out he's been set up. That steely resolve dissolves when Kolya points the gun at Weir. Sheppard, ever the man of military training, still "blinks" and offers Kolya a Jumper.

McKay steps in front of a gun to save Weir and then remembers that he's not that brave. The team members may not always get along (Beckett doesn't like the idea of being ordered around by military, even when the situation is at its most tense), but both episodes show how much they've put their safety and trust in each other.

The two-parter also marks the return of two of my favorite recurring characters: Drs. Beckett and Zelenka. The news that Paul McGillion will be a regular next season is exciting, as Dr. Beckett already feels like a full member of the team, especially in these episodes. Zelenka's banter with McKay adds needed comic relief to the anxiety of "The Storm."

The visuals of the city besieged by the hurricane culminates at the end of "The Eye" with the wave approaching Atlantis, as McKay raises the shield at just the right moment (although an unfortunate coincidence of recent events). The images of the waves and the city attacked by the storm are stunning for a television show.

Here's the problem I have every time I start a review: I'm looking hard for things to criticize so as to make the review balanced, but I feel like I'm nitpicking. But the pure entertainment value and writing of Stargate Atlantis continues to operate at an incredibly high level. After only a half of a season, the cast and crew have gotten me involved with the story and interested in these characters. As with "Rising," these episodes feel less like two separate episodes and more like one solid story. I'm looking forward to the second half of Atlantis's first season!