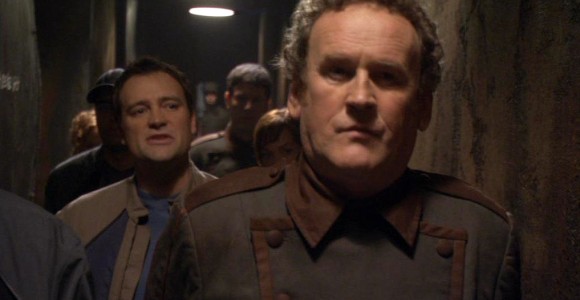 Efforts to open trade relations with a species called the Genii turn sour when the team discovers their new "allies" have ulterior motives.

Food shortages are becoming an issue on Atlantis. Teyla offers a viable trading partner: the Genii, a people of farmers and fair traders. Dr. Elizabeth Weir gives the trade mission a go. Teyla introduces her team to Tyrus and his daughter Sora, who offer to take the team to their leader, Cowen, to commence negotiations for trade. When Major Sheppard and the others travel far enough ahead, Tyrus activates a piece of technology concealed beneath his arm. "I'm bringing them in," he says. "All operations to silent."

Sheppard and the team are introduced to Cowen, who says that they can supply medicine, but food will be an issue. If they give too much, the Genii themselves will not survive the winter. Tilling land is complicated. Therefore, Sheppard offers C-4, plus a demonstration, showing how the weapon can take out tree stumps and the like. Cowen is immediately convinced and asks for trade to commence immediately: explosives for as much food and medicine as Atlantis requires. Sheppard takes this news back to headquarters. Dr. Weir is hesitant to become arms dealers, and is also concerned that Sheppard agreed to terms she hadn't yet approved, but eventually she gives the trade a go.

Back on the planet, the harvest celebration has commenced. As Sheppard and Dr. Rodney McKay return, they find themselves lost without a guide. Rodney detects a radioactive signal, and admits that on an Amish world, this is unusual. They move to investigate and soon uncover a massive underground facility. Three guards quickly capture and detain them. McKay theorizes that the Genii exist as two separate cultures, but that is quickly thrown aside as Cowen appears in full military uniform. Meanwhile, Teyla and Ford sense something is afoot. When they try to step outside Sora says there is a Wraith ship in the area, and everyone must remain indoors.

Cowen is convinced that, for Teyla Emmagan to join them, Sheppard's people must have far more sophisticated defenses besides C-4. Sheppard goes out on a limb and says they're looking for allies against the Wraith – offering a stronger trade. Cowen soon agrees and orders Teyla (who is as surprised as the others) and Ford brought to the bunker. Cowen explains that the "farmer" appearance on the surface is a front to prevent more attraction by the Wraith. In secrecy they have been attempting to develop weaponry that they, one day, hope will help defeat them.

McKay is allowed to examine the Genii atomic technology. He determines that Earth is roughly 60 years ahead of them, but their uranium purification is insufficient. To change this, Cowen soon agrees to an alliance with Atlantis. He says they are preparing to launch their first atomic weapon in five years, but soon discovers that because the Atlanteans woke the Wraith, they will not have that much time. Enraged, Cowen declares Sheppard's team will be put on the surface to die by the Wraith – after all useful information has been extracted from them. But Sheppard assures him that Atlantis has space ships fully capable of combating them, and that their alliance should not be so quickly tossed aside.

Cowen introduces Sheppard's unit to a Wraith data device that was uncovered from a dart they once shot down. The device contains coordinates to a sleeping hive ship. If the Wraith are indeed in no hurry to conquer the galaxy (as "Steve" once said) the vessel might still be there. If they access the database with the device the two peoples can learn the location of all the hive ships, not to mention their numbers.

Back at Atlantis, Weir immediately refuses the mission. After all, the Genii were just about ready to put the team under lock and key. Sheppard assures her he wouldn't be putting his team at risk if he didn't believe they could work with the Genii to obtain the valuable data. Sheppard returns to the planet with a Puddle Jumper, and soon preparations begin for an assault. The mission is to gain access to the ship's data core – not to destroy the craft itself – and extract as much information as possible.

Sheppard pilots the Jumper to the Wraith ship, telling Cowen that this craft is the only one Atlantis is equipped with. Once inside, Teyla and Tyrus break off from the group while the others infiltrate the core. Teyla finds a living person among the harvested bodies, but Tyrus refuses to allow her to help the man for fear that the Wraith will be alerted. Instead Tyrus kills the captive to keep him silent, attracting Wraith warriors to the scene. As Teyla escapes, they fire their stunner rifles at Tyrus, paralyzing him. Meanwhile, Sheppard, Cowen and the others are successful at penetrating the data core, and they return to the Jumper, minus Tyrus, to depart.

When they return to the Genii planet, Cowen turns their weapons on Sheppard's team, snatching away the Wraith data device. Sora is beside herself, believing Teyla was responsible for her father's death. Just as the Genii think they have the advantage, two additional Jumpers disengage their cloaking shields in mid air, weapons at the ready. Sheppard takes back the data device and peacefully departs with his crew.

Back on Atlantis, Grodin determines there are at least 21 hive ships in Atlantis' quadrant of space alone, with as few as 60 ships in the entire galaxy. There is more data, but it will take time to decrypt. Aside from making a new enemy, this valuable intelligence was obtained. Sheppard only hopes the hive ships don't all come at once.