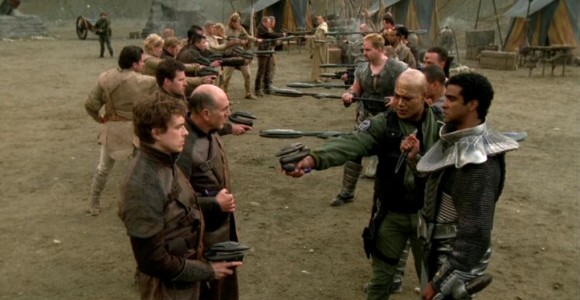 Tensions rise between the Tok'ra and rebel Jaffa at the S.G.C.'s offworld base when they are attacked by an invisible enemy.

Jacob Carter and a large group of Tok'ra refugees arrive at Earth's Alpha Site – a secret, off-world base – fleeing a Goa'uld attack. Anubis discovered the location of their base and attacked, and only one-third of their number were able to escape. (Jacob had tried to dial Earth, but was unable to establish a wormhole because another S.G. team was returning home at the same time.)

But the Alpha Site is also currently home to the rebel Jaffa ("The Warrior"), and there is deep tension between the two groups. The Jaffa see the Tok'ra as little more than Goa'uld with a different agenda; the Tok'ra can only see the Jaffa as servants of the Goa'uld who have been killing their kind for centuries. A Jaffa named Artok and a Tok'ra named Ocker immediately butt heads, and a skirmish erupts when Artok speaks out of turn during the Tok'ra funeral for their fallen comrades. Colonel Jack O'Neill asks for help from Jacob and Bra'tac to keep the peace.

Soon, Major Carter reports that she's discovered a subtle sabotage to the naquadah generator that supplies the camp with power. If she hadn't caught it, it would have exploded and destroyed everything within a 1-mile radius. O'Neill orders Major Pierce to keep everyone away from the Stargate, to prevent the saboteur from escaping.

The Jaffa suspect the Tok'ra, and the Tok'ra suspect the Jaffa. When Ocker turns up dead, all eyes fall on young Artok. Both sides reluctantly agree to lie detector tests all around, to be done with a za'tarc detector ("Divide and Conquer") brought by the Tok'ra.

The Tok'ra all pass the test, and the Jaffa are reluctant to take it – the very purpose of the device questions one's honor, Bra'tac tells them. But the old warrior agrees to convince the Jaffa. When Artok's turn comes up, the machine indicates that he is lying. He is locked up, though SG-1 refuses to convict him based on the questionable machine's results.

But when Artok is murdered in his cell, the team realizes that there is something other than a Jaffa-Tok'ra feud going on. Teal'c suspects that it is an Ashrak – a highly-trained Goa'uld assassin – with a phase shift device that renders him invisible. It must have followed the Tok'ra through the gate from their base – and would explain how Anubis was able to locate them in the first place. With the Jaffa, Tok'ra and humans united against a common enemy, they divide up into teams (with one person from each group on every team) to search for the invisible killer.

Carter's group finds another team in the forest, and all three are dead. O'Neill moves to rendezvous with them, leaving Bra'tac with Malek, the leader of the evacuated Tok'ra base. They are attacked, and Bra'tac saves Malek's life – only to be beaten by the invisible enemy. Malek watches Bra'tac as the assassin drags him away through the bushes. Bra'tac is dead, he tells the others – at which Teal'c nearly kills Malek.

But Jacob stops him, and Malek and Carter come up with a plan. She can alter the generator to generate a high-frequency burst, which may excite the Ashrak's phased body enough to make him partially visible. The Tok'ra, Jaffa and humans surround the Stargate to prevent the killer from escaping.

The Ashrak attacks them, causing a panic – and at least one Tok'ra is killed by friendly fire. In the skirmish, Major Pierce reports, the Goa'uld grabbed his G.D.O. – the device allowing it access to Earth.

The modifications are complete, and the Ashrak is made visible. He attacks them again, and manages to disengage the generator. But Carter brings it back online, and O'Neill sees the assassin charging him. Finally face-to-face with his foe, he draws his knife.

Staff weapon shots ring out, and the Ashrak is hit several times from behind. He falls dead, revealing Bra'tac holding the weapon. The Goa'uld had left him for dead in the woods, but Bra'tac's symbiote sustained him. Now, he declares to everyone, they have slain their common enemy. The Ashrak's knife – used to spill the blood of Jaffa, Tok'ra and Tau'ri alike – has done what they could not do. It has brought them together.