Children of the Gods: The Final Cut (Soundtrack) 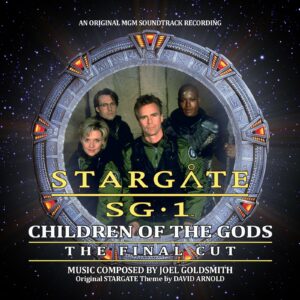 Released in 2009, The Final Cut showcases Joel Goldsmith's original score for the SG-1 pilot movie, which had been curtailed back in 1997.

... The first episode of STARGATE SG-1 was titled ‘Children Of The Gods’. Composer Joel Goldsmith wrote a complete score for the episode but the decision was made in post production by MGM to also include selections from the score composed for the 1994 feature film. At the time of the episode’s debut, a soundtrack album was released by Milan Records that was representative of the music used in the episode, which included a portion of Joel’s score along with selections from David Arnold’s score for the feature film, with a running time of nearly 45 minutes. In 2009, producer Brad Wright received permission from MGM, the studio that owns the franchise, to recut ‘Children Of The Gods’ and present it as it was originally intended, which included restoring Joel Goldsmith’s orchestral score. Dragon’s Domain Records, to be distributed by BuySoundtrax Records, presents STARGATE SG-1: CHILDREN OF THE GODS – THE FINAL CUT, mastered by James Nelson at Digital Outland, featuring forty minutes of previously unreleased music. The booklet contains liner notes written by series creator and executive producer Brad Wright.